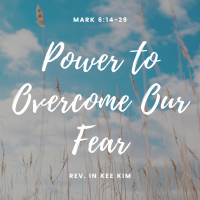 My conclusion is that I need the power that CAN DEFEAT MY FEAR. We need the power that helps us overcome our fear. This PANDEMIC killed many lives and it drove many people into fear. This virus has gripped the whole world with fear. It has affected our life in the most profound way. It was real fear, not just imaginary paranoid. As of July 9, it killed 4,025,765 people worldwide.

But it is NOT JUST THIS VIRUS that causes fear within us. Fear is what we experience every day in our lives. Fear is very much A PART OF OUR LIFE. Of course, there are also neurotic fears, I admit. That’s why we have all these phobias: acrophobia, aerophobia, arachnophobia, claustrophobia, and so on. But fear is always with us. We have fear about the unknown future, fear about our finances, our health, our children, and unforeseeable accidents, and fear about death. These are real fears.

Whatever we do, we will encounter our own fear. When we are gripped by fear, we make all kinds of mistakes we wouldn’t usually make. Euro Cup Soccer is going on right now. COPA America just finished yesterday. Also Wimbledon Tennis is going on and a Canadian Shapovalov went up to the semi-final, but lost to Djokovic. I saw some games of both soccer and tennis and I saw clearly what fear did to them. They choked. They made mistakes they wouldn’t usually make. It’s not just in sports, but in every aspect of our lives, when fear grips us, we make mistakes. We cannot think clearly.

That was what the disciples needed to learn. Mark had a very creative way of communicating his message. Today’s story was inserted right in between these two statements.

Verse 13: They cast out many demons, and anointed with oil many who were sick and cured them.

Verse 30: The apostles gathered around Jesus, and told him all that they had done and taught.

The story we read is right in between verse 13 and 30.

Mark uses this sandwich method quite a bit in his writing.

Verse 13: They cast out many demons, and anointed with oil many who were sick and cured them.

They were able to experience the power of exorcising demons and healing people. They never experienced this kind of power in their lives. So, with the excitement, they shared what they experienced with Jesus.

Verse 30: The apostles gathered around Jesus, and told him all that they had done and taught.

But in between these two verses, Mark inserted the story of the head of John the Baptist being beheaded.

What was Mark trying to say? Mark was trying to say that there was a greater power than the power of exorcising demons and healing the sick. IT WAS THE POWER OF OVERCOMING FEAR. That was the kind of power JOHN THE BAPTIST HAD. He didn’t do miracles. He didn’t exorcise demons. He didn’t heal the sick. But he had the POWER to be faithful to God to the end. Even fear of death could not break him.

Mark 6:14-29 is a long passage. You hear about Herod, his wife, and his stepdaughter. It describes how John’s head came to be beheaded. Even though it was a story of John the Baptist, JOHN WAS VERY QUIET. We don’t hear anything about him. He was completely silent. But his silence spoke volumes. He didn’t try to run away. He didn’t try to save his life. He didn’t try to persuade Herod. But he had the power to live out who he was. He was a voice in the wilderness and he did his job. And when imprisonment and death came as the result of his voice, he accepted them. Imprisonment and death could not break him. He had the power to overcome his own fear.

The king was deeply grieved; yet out of regard for his oaths and for the guests, he did not want to refuse her. (Mark 6:26)

Just because he promised to a little girl that he would do anything she was asking for, he would kill a man? What kind of coward was he? He should have confronted the girl and told her how inappropriate it was for her to ask him to kill someone.

Discipleship is not about what we do. DISCIPLESHIP IS ABOUT OVERCOMING OUR FEAR. Jesus’ disciples experienced wonderful power of God and yet they still had to learn to have the power to overcome their own fear. When Jesus was arrested, they all ran away because of fear. Peter denied Jesus three times because of fear. But in the end, they all learned to have the power to overcome their fear and became faithful to the truth Jesus taught them.

When truth comes alive within us, fear has no place within us. That’s why Jesus said,

Not just truth, the truth you know. That means when truth comes alive within you. This truth will set us free from fear.

If God is for us, who is against us? He who did not withhold his own Son, but gave him up for all of us, will he not with him also give us everything else? Who will bring any charge against God’s elect? It is God who justifies. Who is to condemn? It is Christ Jesus, who died, yes, who was raised, who is at the right hand of God, who indeed intercedes for us. (Romans 8:31-34)

God called us, and declared that we are justified. Our sins are forgiven. No charge is laid against us. Now God is for us, what will be against us?

We are free from our fear, fear of punishment, fear of failure, fear of rejection, and fear of death. We are free. We have that power to overcome our own fear. We don’t need to live in fear any more. That was how John the Baptist lived and died. That was how Jesus lived and died. The stories of John the Baptist and Jesus were not ABOUT THEIR HORRIBLE DEATHS. Their stories were about how they did not submit to the power of fear. Their stories were about how they conquered the power of fear.

One of the greatest blessings we get in getting to know Christ is to get the power to defeat the power of fear. When you have that, you can handle any challenges you may face in your life. As you get to know Christ more deeply, the more power you will have and this power will completely free you from fear.