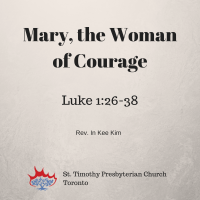 In the sixth month the angel Gabriel was sent by God to a town in Galilee called Nazareth, to a virgin engaged to a man whose name was Joseph, of the house of David. The virgin’s name was Mary. And he came to her and said, “Greetings, favored one! The Lord is with you.” But she was much perplexed by his words and pondered what sort of greeting this might be. The angel said to her, “Do not be afraid, Mary, for you have found favor with God. And now, you will conceive in your womb and bear a son, and you will name him Jesus. He will be great, and will be called the Son of the Most High, and the Lord God will give to him the throne of his ancestor David. He will reign over the house of Jacob forever, and of his kingdom there will be no end.” Mary said to the angel, “How can this be, since I am a virgin?” The angel said to her, “The Holy Spirit will come upon you, and the power of the Most High will overshadow you; therefore the child to be born will be holy; he will be called Son of God. And now, your relative Elizabeth in her old age has also conceived a son; and this is the sixth month for her who was said to be barren. For nothing will be impossible with God.” Then Mary said, “Here am I, the servant of the Lord; let it be with me according to your word.” Then the angel departed from her.

As I was reading this, how could she say that? How could she accept that? Was she a religious fanatic to accept things like that. Or was she mentally not healthy to just accept?, “yeah, I’m a virgin, but I’ll accept it”. Just from this passage, this is really hard to say, what Mary was really like, what kind of person Mary was? No ordinary woman can accept what the angel said even though it was an angel, no ordinary women can accept what the angel said to her, and you know she was a very ordinary woman from a village. There was nothing special about this Mary. The scripture doesn’t say anything about Mary. She was simply an ordinary woman. But as I reflect on this person, Mary, I realized that she was not just an ordinary woman. She was a very strong woman. Not only was it difficult for Mary to accept the birth of a person while she was a virgin, even though that was a very difficult, but more difficult thing was to live with the son of God, to raise the son of God and to live with son of God for the rest of her life. It was difficult to be the mother of the son of God. As soon as Jesus was born, her life became very very difficult. Until then, she lived a very ordinary life, a comfortable life, but as soon as the Jesus was born, trouble after trouble. The first thing was Herod tried to kill all the babies, so when Joseph, her husband to be and herself had to run away to Egypt and then live in a foreign country, it was trouble after trouble.

Then when Jesus was a teenager, it was difficult to really handle this is a teenager boy. Once they went to the temple and Jesus on the way that they realize that there son was gone. So they went back to temple and Jesus was sitting there with the scribes and teachers and discussing important things or whatever, I don’t know what they’re talking about, but he said, “did you know if I’m supposed to be in my father’s house?” Things like that. How can they handle the kids like that? Not even that, he’s too big for his mother to control. He was too big to guide and control, he was always ready to run into trouble. I mean he was the Son of God, but he ran into trouble all the time. People always criticized him, accused him and sometimes even accused Jesus of being crazy and demon possessed. How as a mother, how can you take that? How can you take that when somebody said, “your son is crazy and your son is demon possessed?” How could Mary, how could a mother take that your child demon possessed and crazy? Mary had to go through all this troubles and difficulties and hardship, you know having a baby as a virgin is just the beginning of the troubles in her life. All throughout her life, she went through so much trouble because of Jesus.

How We should Live

Luke, the Gospel writer, the author that saw all that, was all along with Mary. Luke saw what Mary did and saw how Mary lived like that, “Let it be with me according to your servant”. Even after Jesus died, Mary was with the disciples and this is how Luke records that. When they had entered the city, this is after Jesus died. They are the disciples. They all went to enter the city. They went to the room upstairs where they were staying, Peter and John and James and Andrew, Phil, Thomas and Bartholomew, Matthew, Simon the zealot and Judas son of James. These are 11 disciples. Judas was not there, he already committed suicide. All of them were constantly devoting themselves to prayer together, including Mary, the mother of Jesus. As well as his brothers. Mary’s life, how she lived her life, and how she lives her life after even after Jesus died, Mary was a wise woman. She was a humble woman. She was a strong woman. She was a woman of courage. She showed to all of us how we should live, “I am your servant Lord, let me be with you according to your word”. That’s wisdom, that’s how we should live our lives. That is the best way to live our lives, my friends like Mary, we sometimes experience the uncomfortable truth as Michelle prayed eloquently in the world, there are many mothers who are crying because of the uncomfortable truth that they experience in their lives, and sometimes my friends not only those mothers, but we all sometimes experience the uncomfortable truth about our lives, about us, others around us, things that we don’t want happen to us, life is not that easy. Things that we don’t like to happen to us. Our situations are too difficult to handle. Our problems are beyond our capacity to deal with and I see many people who don’t deal with situations very well. When these things happen, they get really, really stressed out and they complain and try to manipulate the situation with their shallow understanding of wisdom. They try to manipulate the situation and if everything doesn’t work out, then they give up and they become totally helpless and hopeless. Mary, she experienced the uncomfortable truth. What did she did not want to happen to her? She did not fight that. She was a woman of thinking. She sat down and she accepted it, “Let it be with me according to your word, I am your servant”. When we experience similar situations as Mary, what we need is faith or they need to trust in God and you will see how God will work miraculously. The other day, this man from KSM received really unfair treatment in his work, racism when I heard that, but he resists and forgets. One day he said to himself, “Ok I will give everything to God” and the next day, all the problems were solved. He experienced the miracle of his life and he told me that “Moksanim, I received the best gift, Christmas gift this year” Life’s impossible situations.

Nothing is impossible with God who strengthens us. Some of you may go through very difficult problems in your life, don’t try to handle with your wisdom and power that work in your lives, and experience and witness the miracle that is that can happen in you. Mary, because of her faith, she allowed the savior, the Messiah to fulfill God’s will, without Mary, Jesus would not have done what he could do. She was a wonderful woman, who brought a miracle to the world, who brought the best gift to all of us, and in the end, she never lost her faith in God. She did well as a mother, as a mother of the son of God, and I’m thankful that she did well. She made it possible for the Messiah to work out the salvation for all of us. My friends, Merry Christmas and think about Mary and every faith in every possible situation, don’t give up. Let it be with me according to God’s will and God will work out for you.