By: Paul Jang and Doyeon Oh 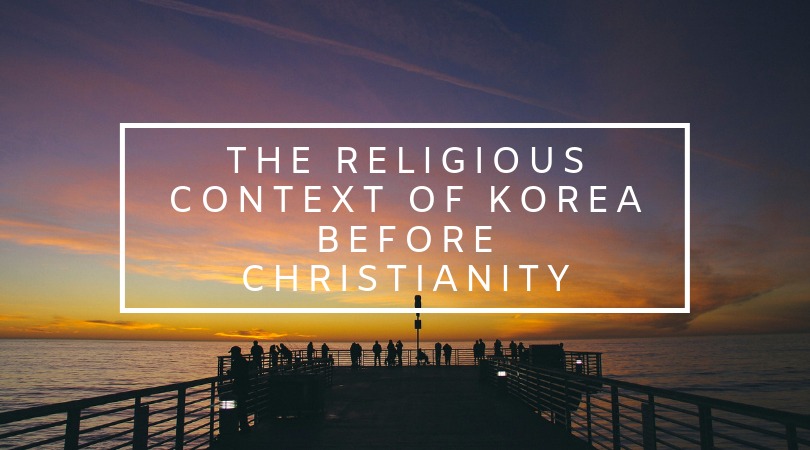 This blog post explores how various aspects of Shamanism, Buddhism, and Confucianism in the past have shaped the Korean Christianity that we know today.

What was the religious context of Korea when Protestant Christianity first came to Korea?

The religious context of Korea before Protestant Christianity arrived was very different compared to today. However, a lot of the values and traditions of previous religions influence every aspect of Korean life. Before Christianity there were three main religions: Shamanism, Buddhism and Confucianism; each playing an important role in shaping Korean culture.

Shamanism contributed to the emotional aspect of Korean culture. It is a world-wide religious phenomenon that anthropologists consider to be the most ancient and fundamental form of spiritual practice. The general idea is that there is another world beside the one of the living, and the Shaman (무당, mudang) acts as the connection between the two worlds. The “other” world that Shamanism speaks of consists of spirits and ancestors. In Shamanism, rather than choosing to become a Shaman, the gods (spirits or ancestors) choose a body to descend upon to heal, guide, and send a message.

Shamanism was and still is a big part of Korean culture since it rooted from the hardships and suffering that peasants faced during the Joseon Dynasty. Most peasants had to work day and night to survive. On top of all that, the profit that came from working lands and harvesting crops were not solely theirs to take. They were only given a small share as the landowners took most of the money. All the financial and emotional struggles led to a lot of stress in their lives, and they resorted to relying on a spiritual source, which was how Shamanism became a big part of Korean people’s lives.

Because Shamanism occurred naturally in Korea, it is often regarded as the foundation of Korean culture. Shamanism had a great influence on the Korean culture as they believe that because the Korean people are descendants of the great shaman, Dangun (단군), they can truly laugh and cry. Although Korean Christians rejected shamanism because of its polytheistic and animistic nature, many of its traditions have integrated into Korean Christianity. Practicers of shamanism believed that creating loud noises would scare spirits away. This practice has evolved into a common form of prayer in Korean churches, often known as crying prayer (통성기도). Those who participate in crying prayer will shout, yell, cry and it is overall a very emotional experience.

Buddhism contributed to the mental aspect of Korean culture, as meditation and having time to oneself was a big focus in the religion of Buddhism. It was introduced to Korea by the Chinese monks in the fourth century A.D. and became the official religion of Korea until it was replaced by Confucianism. Buddhists believe that existence is suffering, and we only suffer because we have attachments to this world. We can escape suffering by leaving behind our attachments and entering a state of nirvana.

Buddhism has helped refine Korea’s culture, by developing the Korean way of life. Buddhist traditions, such as meditation and early morning prayer, have continued among Korean Christians, even though Korean Christians may deny Buddhism. In addition, many Korean Christians emphasize the experience of suffering, which is similar to Buddhist beliefs. Throughout history Koreans as a people have gone through a considerable amount of suffering.

Confucianism was more than a religion; it became a large part of Korea’s sociopolitical system, and many of its values are still held very highly in today’s society. Koreans took orthodox neo-confucianism so seriously to the point where it became the political, social and moral instrument of Korea. The focus of Korean Confucianism was ancestral worship. Early Christian missionaries in Korea were persecuted for their refusal to practice ancestral worship. This aspect of Confucianism is deeply rooted in the hearts of Koreans and is something most Koreans still practice today. Modern day Korean Protestants do not outright reject ancestor worship, but instead have ‘Christianized’ it. Chu-seok (추석) is the national day of ancestor worship in Korea and is similar to the Christian Thanksgiving. Fresh fruits and food are prepared and dedicated to ancestral spirits and then eaten by the family. Families will also visit burial sites to commune with dead ancestors.

Perhaps one of the most essential aspects of confucianism is its hierarchical relationships. There are five relationships: between the ruler and ruled, the father and the son, the husband and the wife, the older brother and younger brother, and the old and young. Korean society places a huge emphasis on filial piety, which is the virtue of respect for one’s elders. When meeting someone in Korea for the first time, it is common to ask personal questions such as your age, education, and employment so that the proper way to speak and act can be determined. The Korean language also uses honourifics as a sign of respect in many social situations.

Confucianism has many values which include: honour, honesty, sincerity, generosity, compassion, respect and obedience. Education nurtures all these values and is therefore a way to succeed in life. To this day, Koreans place a heavy emphasis on getting a good education and it is therefore a very competitive student experience.

Neo-confucianism branched off of Confucianism in 14th century CE. Originally from China, they added a belief that all men could attain higher goals if they applied themselves to the original Confucianism. Neo-confucianism also added the importance of state examinations, which still gave advantage to elites who had the opportunity to get years of education. They also put emphasis on hierarchical roles for everyone. This was a step backwards for women’s rights as their position and status in Korean society at the time was lower than that of men. The influence of Neo-confucianism still exists in Korean culture as the educational competitiveness is very high amongst students and parents.

When Christianity arrived in Korea, for Koreans, it was not a transition of religion. The overall idea of religion became a harmonization of religious practices, rather than an attempt to blend the religions together, or to choose one religion over the other. Today, many religious traditions are brought together in the life and thoughts of Koreans. Koreans are now considered syncretic because of the coexistence of many religious practices in Korea.

Through this research project, I came to realize the diversity of religions and how they affected and are affecting Christianity amongst Koreans. I found it fascinating how until today, these religious cultures are still affecting the lives of Koreans living in both Korea and Canada. This research project affected my faith in a way that I came to realize my beliefs are not only restricted to Christianity, but also have roots in other religions.

After having conducted research on the religious context of Korea before Christianity, it was very cool to see how much of the traditions and ethos of Shamanism, Buddhism and Confucianism has carried on and evolved into Korean Christianity today. I realized that my faith has many aspects which I previously assumed that all Christians believed in or practiced, however it was exclusive to Korean Christians.

This is the first post in the “Stories of Faith” series. Click here to see the others.
Stories of Faith is also the theme of our 2019 ESM Summer Retreat. Learn more about it here and register now!