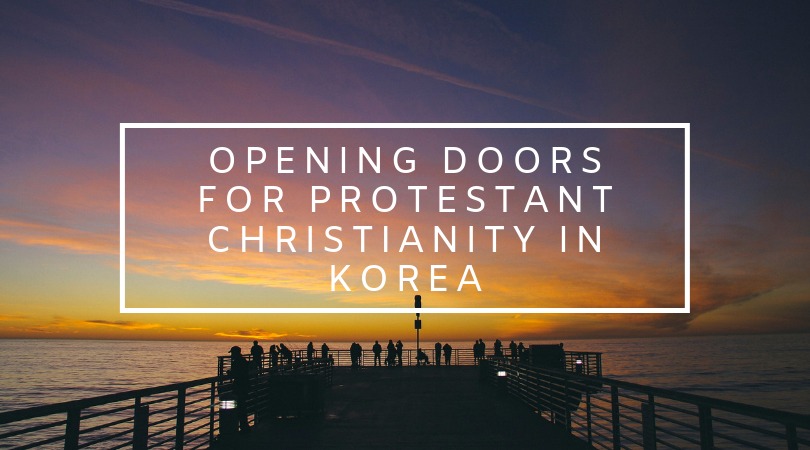 This blog post explains the origins of Protestant Christianity and its development in Korea. Please read to the end to see Elisabeth’s personal reflection on the content of the post.

This is the second post in the “Stories of Faith” series. Stories of Faith is the theme of our 2019 ESM Summer Retreat, and this mini-series will be a lead-up to the retreat. Learn more about the retreat and register now!

What factors led to the opening for Protestant Christianity in Korea and how did it develop?

From housing some of the largest churches in the world to basing thousands of Korean missionaries, Protestant Christianity proves to be an integral piece of current day Korean society. Despite it being such a central part of Korean history, influencing politics, society and culture, it was only through missionaries and Christians answering God’s calling and taking that step into uncertainty, that Protestant Christianity became and remains such a vibrant force in South Korea.

Although Catholicism had been present in Korea as early as 1603, Protestant Christianity had yet to make its appearance. However, as it spread through East Asia, it was only a matter of time for Protestant Christianity to reach Korea. In 1823, the first Bible translated in Chinese was published and the amount of Chinese Protestant literature began to rise. With such an influx in religious texts, a wide number of them were smuggled into Korea through their Northern border by the 1870s and made available for Koreans. These written texts were the right acceptable medium to communicate to the Confucian culture of Koreans at that time, leading to increased interest and demand.

Christianity had already been present in Korea in the form of Catholicism. Unfortunately, it was highly stigmatized as many associated it with treason and collusion with foreign powers. Korea was commonly referred to as a hermit country due to its isolation from the rest of the world. It had extremely strict policies and restrictions on foreigners trying to come into their country, making it extremely hard for missionaries abroad to share God’s message with them. This resulted in many missionaries becoming hesitant and reluctant to engage with Korea; but thankfully, not all.

Robert Jermain Thomas was a Welsh Protestant missionary who was serving in China until he felt a strong calling towards the Korean community. At the end of 1865, Thomas spent two-and-a-half months distributing Chinese Bible portions along the coast of Korea until Korean officials found an opportunity to attack. In 1866 a US merchant ship with Thomas on board was attacked and stranded. Thomas however managed to launch copies of Chinese New Testaments to the shores of Korea as the ship was set ablaze. Some say that even after they were caught on the shores, Thomas was seen praying for his killer and offering him a Bible.
Not all Christians are called to a cause this dangerous. God can give each of us the opportunity to do His work, it’s just up to us to answer Him.

In 1882, Korea signed a treaty with Western countries and as a result, they started to be more lenient on incoming foreigners. With this change and the growing interest in Protestant Christianity by the Korean people, missionaries overseas found motivation to continue to help this community on their journey to finding God. The Gospels of John and Luke in 1882, and Matthew, Mark, and Acts in 1884 were translated into Korean by foreign missionaries and Korean Protestants living outside of Korea, then published. By the end of 1884, Protestant literature was easily obtainable in Korea, even though it wasn’t until 1894 that it became legal.

Now at the time, Confucianism and Neo-Confucianism was highly influential towards the ideologies and values in Korea. The key focus of Neo-Confucianism was not just on the application of Confucian ideologies, but on the ability that people can transform and strive to achieve perfection. The process of perfecting human nature had a stronger focus on educational achievement as this became the most significant measure of socio-economic status and social respectability. Unfortunately, this was only accessible to the upper class since they were the only ones who could afford the resources despite knowledge being unanimously desired.

This, however, worked in favour of Protestant missionaries. While everyone was striving towards education, not all could access it. Missionaries and Protestants came claiming that education was vital for this religion and offered people the opportunity to learn more. A religion that demands all worshippers, no matter what their social background was, to learn to read as a central part of being converted, saved, and join the church, was extremely motivating for the Korean community to start to learn more about Protestant Christianity. As the promise of education initially enticed people, allowing them to be more open to learn, in the end, the overall messages provided by this religion aided in further developing their faith, therefore allowing Protestant Christianity to be so apparent today.

Although education played a vital role in the expansion and acceptance of Protestant Christianity, there were still restrictions against foreign missionaries as stigma behind Catholicism still existed. So much so that many Protestants deliberately distinguished themselves from Catholics for doctrinal reasons and to avoid persecution.

The first Protestant missionary to work in Korea was Doctor Horace Newton Allen, although according to secular authorities, he was just there for medical purposes. During his time in Korea, Allen helped to improve the health of numerous people, all while demonstrating Christian love for the sick and poor. This spoke to many people’s hearts to accept Christ as their Saviour. This was so impactful that in 1902, the Mission Council required a doctor to be on staff for each new mission station.

There are two different accounts of the first Protestant church being established and each of them were attributed to the main means in which Protestant Christianity was embraced and adopted.
One of the first possible Protestant churches in Korea was established by Baek Hong-jun in Uiju, which is located just within the northern border. Baek Hong-jun had travelled there in 1879 for evangelical purposes to study Gospels that were smuggled in with the locals in the area. This continued to grow and reach out to an increasing number of people and by 1884 they had reached 18 members.

The other first possible Protestant church in Korea was located in Sorae which is on the coast of Hwanghae. This church was founded by brothers Sang-ryun and Suh Sang-u. After the eldest of the two brothers had become fatally ill, he was healed by Doctor John MacIntyre; a Protestant missionary similar to Doctor Horace Newton Allen. Sang-ryun was later baptized and established a church in Sorae around 1884 with his brother who later stayed and pastored believers living there while Sang-ryun continued his itinerant activities.

The Further Development of Protestant Christianity in Korea

After all of these events, Protestant Christianity continued to expand and reach out to those who had not heard the good news of Jesus Christ and to those who needed it most. Among the many things, the message served as empowerment to the Korean community and started levelling out people of varying classes and economic statuses and also provided more equal resources to everyone.

As illustrated through the story of how Christian faith found roots in Korea, it was clear for me to see how God had paved the way before these missionaries to provide opportunities for them to spread God’s message. Seeing how God was constantly working before and alongside these missionaries and Protestants acted as a reminder to me of how we are truly never going through life alone.

This is the second post in the “Stories of Faith” series. Click here to see the others.
Stories of Faith is the theme of our 2019 ESM Summer Retreat, and this mini-series will be a lead-up to the retreat. Learn more about the retreat and register now!