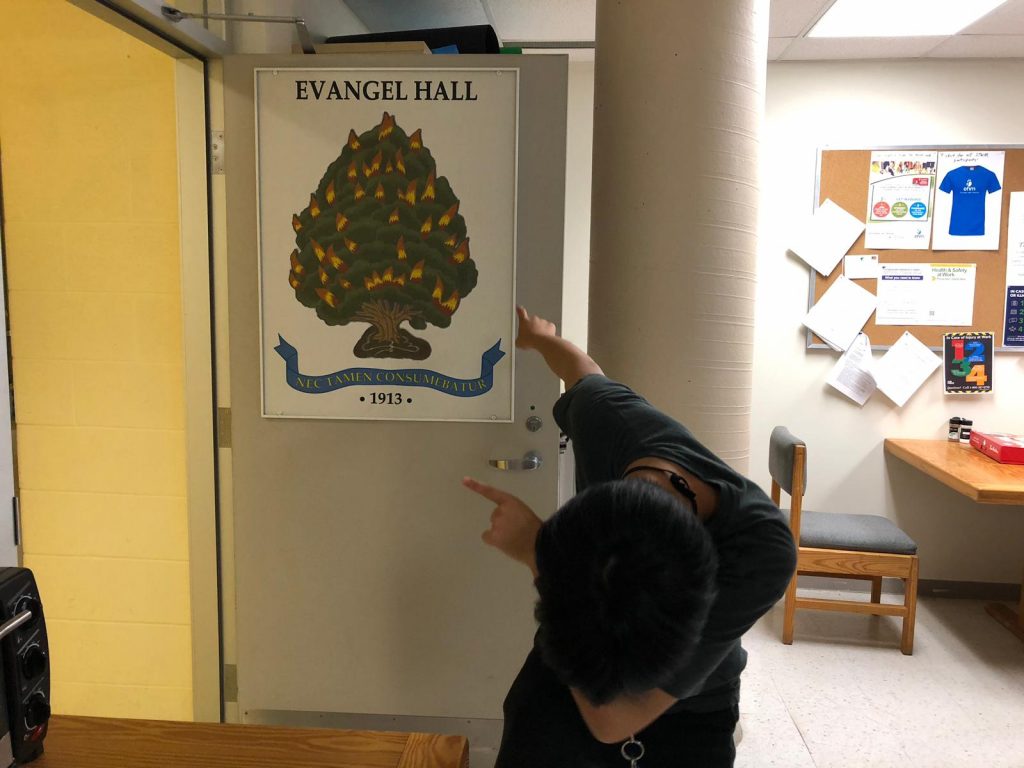 Two weeks ago, Simon approached us telling us that we were going to be working at Evangel Hall for part of our summer internship. Simon laughed as he noticed our confused looks as we thought, “so…we’re going to be serving food for the next two weeks?!” Little did we know that it would become much more than that.

As we walked in on the first day, the unfamiliar atmosphere was overwhelming. We felt a distinct and abrupt disconnection between the bustling city and the safe haven for the homeless and socially isolated that was Evangel Hall. We were in the heart of Toronto, surrounded by working people getting their coffee, taking their lunch breaks, and shopping. Then we turn the corner to the intimidating sight of many homeless people waiting outside of the building. It took some time getting used to the new environment, but once we opened up ourselves to the different parts of society, we gained a new understanding and awareness of the world around us.

We thought Evangel Hall only served food at the drop in center, but their role in the community is much more than that. They provide housing, receive and distribute clothing donations, help the participants manage their finances and find them homes. Periodically, a nurse comes in for check ups and there is a full dental clinic in the basement. On top of all that, they offer programs such as women’s group, men’s group, creative group, and other programs for the residents. They also offer support systems such as alcoholics and narcotics anonymous.

We worked closely with the spiritual coordinator, Crystal. She hosts memorial services for the participants who have passed away, one of which we had the opportunity to attend. We spent the majority of our time serving food in the mornings and participated in the programs in the afternoon. We also helped organize files, create welcome packages, and sorted through donations.

We quickly fell into a routine, and became more and more comfortable interacting with the participants with each passing day. By spending two weeks there and diligently reflecting on our experiences everyday (all thanks to Rev Simon!), we realized the profound impact it had on our outlook on life and society.

Reflections on our Evangel Hall Experience

Over the past two weeks of working at Evangel Hall, we gained some valuable new outlooks on our society and our lives. Even by learning more about the basic necessities that EHM provides, such as laundry machines and showers, we felt truly blessed for things we often took for granted. This experience was a wake up call for us as we saw how life had not been kind to many of the participants.

One thing that really stood out to us was their chapel. There, they have a wall dedicated to members of the community that have passed away. Many of the participants wanted to have their picture taken since a lot of them don’t have good relationships with their families or anyone to have a memorial service for them if they were to pass away. Otherwise, there would be no other way to remember them by. This experience made us realize that it is human nature to seek out love and acceptance – we all want to find purpose and meaning in our lives, then to be remembered once we’re gone. No matter one’s own circumstances and living conditions, at the end of the day, we are all human and desire the same things for our lives.

When we first started interacting with the participants, we didn’t know what to expect. We had some doubts and worries based off our preconceived notions about their behaviour. At the beginning, we were nervous and held back from conversing with them. But as time went on, we became more and more comfortable with the participants, finding ourselves engaging in longer conversations. Our eyes were opened to their past that led them to their current living situations, allowing us to be more understanding. When you walk down the street, you pass by several homeless people and don’t think twice about them. Our perspectives quickly changed as we learned that society has rejected them, forcing them into isolation. For example, there were many tenants who did not leave their apartments for months at a time. We realized how society let them down first, instilling a fear that caused them to isolate themselves even further.

Even though Evangel Hall may not seem like much from an outside perspective, it truly is a community full of support, comfort, and connectivity, much like St. Tims! One rainy morning, we looked outside to see a woman wrapping blankets around a man. Even though neither of them had much, they supported and cared for one another. We had the opportunity to attend a memorial service for one of the participants. Everyone who came to the service truly loved him and everything the staff does for the participants really makes a significant difference in people’s lives. The people who talked about him mentioned that while he did have a difficult life, he lived a decent life because of EHM. It amazed us to see and hear the care and support the staff givesto the participants. To know that there are people in this world that care as much as them is reassuring.

We’re thankful that we got the opportunity to spend two weeks at Evangel Hall and we can only hope that we remember our experiences and lessons learned as we grow up.