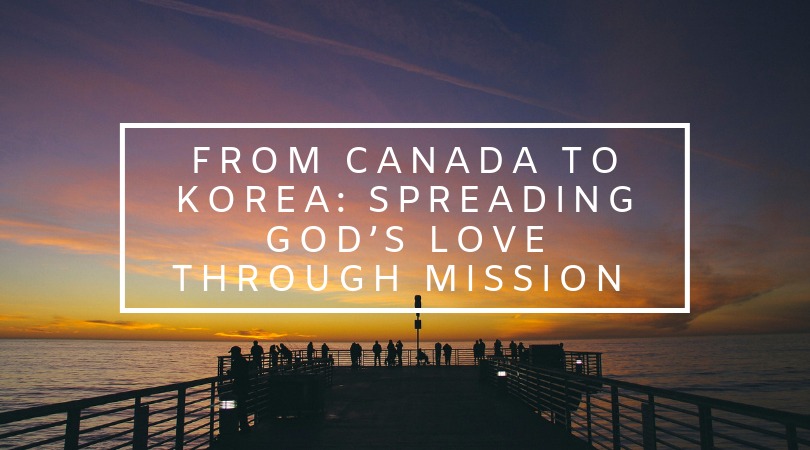 This blog post highlights the works of Canadian missionaries in Korea and how it affected the Korean people. Please read to the end to see Monica’s personal reflection on the content of the post.

What role did Christianity and Christians play in people’s lives?

Canadian mission work can be divided into four different stages: the first stage during the Independant Period of 1888-1893, the second stage during the Quasi-Independent Period of 1893-1895, the third stage which consisted of the missions under The Presbyterian Church in Canada during the period of 1898-1925, and the fourth stage consisting of the missions under The United Church of Canada in 1925 and the missions under The Presbyterian Church in Canada in Japan. The first missions were supported by the Presbyterian Church in Canada and was later supported by The United Church of Canada. It was the Eastern Division of the Board of Foreign Missions of the Presbyterian Church in Canada that was responsible for initiating missions to Korea. For this reason, most missionaries were recruited from maritime provinces. The Maritimes connection had an important impact on formation of “Christian character” in the Canadian mission field in Korea. They worked to convert the Korean population to Christianity and modernize them, while introducing modern education, technology, and values. They relied upon methodological techniques and repeated revival campaigns and operated educational, medical, and other community service agencies. Creating schools and helping children study Bibles translated in Hangul (한글) were just some of the services that they provided. Canadian missionary services played a big role in education and medical factors, through schools and hospitals that missionaries used to accomplish their religious goals. They would open up these mission schools and hospitals, and bring teachers and experts to teach young children, both boys and girls, how to read and write. Aside from having a Christianizing effect on the people who used these services and facilities, it also had an effect on those who worked there. This was the main goal for these institutions, to reach as many people as possible by spreading the truth of the Gospel.

Korea was in an unstable situation both religiously and politically. Canadian Christian missionaries coming into the country to support Koreans, whether they were Christian or not, is a core example of what it means to “Bless the Lord”. When I think of what it means to “Bless the Lord”, I think of giving thanks to God and, as Christians, trying to spread the word and love of God. This is what the Canadians did for the Korean people. Going into a foreign country where you don’t know the language nor the culture is not something that can be easily done. These missionaries placed themselves in a new environment to go and support Koreans. They gave the Korean people a sense of peace and support through Christianity. When we look at the mission schools that were built, the Bibles translated into Hangul, and the spreading God’s word, it is evident that these tasks are all done through the love of God.

When we look at why the Canadian missionaries were so successful in evangelizing the Korean population, it really makes you take a look at Korea’s environment prior to their arrival. Before Canadian missionaries came into Korea, the country was separated between the elite class and the commoners. Things that we might take for granted, like education, was something that was only offered to the upper class, while those outside of this elite class didn’t have the opportunity to learn how to read nor write. It was through mission schools that the commoners were given the chance to learn how to read and write in Hangul, the original Korean alphabet that was looked down upon during that time period (the alphabet most commonly used was Hanja). Aside from mission schools, Confucianism was a religion that the elite class had more advantage over, which allowed them to have more opportunities for education. In the midst of this situation in Korea, Canadian Christian missionaries came in with a new religion and a new form of support that was able to help all classes of the Korean population.

Canada had multiple roles in the development of Christianity in Korea. From mission schools and hospitals to translating the Bible and teaching Hangul, they played a significant role in both spreading the word of God and providing valued services. Through Canada, the Korean people were able to find a religion that they truly found comfort in, while receiving help educationally and medically. The acts and services of the Canadian Christian missionaries is a perfect example of what it means to “Bless the Lord”. By reaching out to the people of Korea and spreading the word of God to others who weren’t aware of it, they perfectly illustrated what it means to “Bless the Lord”.

Overall, this topic had an affect on the way I personally think about my own faith. When I looked at how much the Canadian missionaries did for the Korean people, out of their love and trust in God, it made me reflect on my faith and how I could grow to help others within my own community and even those outside of my community. Aside from this, it made me think about how strong God’s love truly is. Though not all the Korean people were Christians from the very beginning, through the love and support they felt from the Canadian Christian missionaries, they were able to get through their difficult situations while also being opened to new opportunities.

This is the third post in the “Stories of Faith” series. Click here to see the others.
Stories of Faith is also the theme of our 2019 ESM Summer Retreat. Learn more about it here and register now!