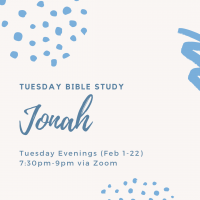 So it’s very important to reflect deeply on this last chapter.

The word “angry” comes up 5 times in English, 6 if you include the Hebrew root for “displeased”

Jonah’s anger is a recurring theme, and one you identified in your questions.

Jonah is angry that God changed his mind about Nineveh.

But Jonah’s reaction reveals that DP is right when he states that Jonah has no love for Nineveh.

Jinny asked why he went out to see what would happen.

So in line with some of the questions posed:

Why is Jonah so angry about God’s compassion and change of heart?

What does his anger reveal about Jonah?

Jonah was so happy about the bush.

It’s to the point where he repeats what he said about God’s change of heart to Nineveh: “It is better for me to live than to die”

The interesting thing is that God asks a second time: “Is it right for you to be angry?”

What do you learn about Jonah from this?

What do we learn about ourselves?

When Jonah was in the belly of the fish, he had a deep moment of reckoning.

Rockey asked if Jonah actually repented in the fish, or if it was superficial.

What do you think?

What’s the difference between his repentance in the fish, and what you see here?

On the face of it, it seems like Jonah’s calling was to go to Nineveh and cry out against it.

What does this last chapter reveal about the nature of God’s calling?

What does this say to you?