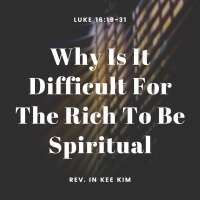 Blessed Are The Poor

But it is true that the Scripture speaks quite a lot in favour of the poor. Especially in Luke.

From the beginning of his gospel, he started with that.

He has filled the hungry with good things, and sent the rich away empty. (Luke 1:53)

The Spirit of the Lord is upon me, because he has anointed me to bring good news to the poor. (Luke 4:18)

Then Jesus: Sermon on the Plain

It is Beatitude in Luke.

Blessed are you who are poor, for yours is the kingdom of God. (Luke 6:20)

But he was harsh on the rich.

Indeed, it is easier for a camel to go through the eye of a needle than for someone who is rich to enter the kingdom of God. (Luke 18:25)

Is it because Jesus did not like the rich? I don’t think so. But definitely he did not favour the rich over the poor. Not like what we see so much in the world we live in.

Jesus was harsh on the rich because it is hard to be both rich and spiritual. Jesus didn’t want us to fall into temptation by wanting to be rich. Money can bring so many temptations.

St. Paul had the same warning for us.

But those who want to be rich fall into temptation and are trapped by many senseless and harmful desires that plunge people into ruin and destruction. (1 Timothy 6:9)

You don’t need to teach these things to the poor. They already have all of them. They live with those recognitions every day.

But to the rich, these things do not come automatically. That need is not there. So it is hard to be spiritual. That does not mean that you cannot do it. But it is hard.

If you are rich, why would you want these recognitions? You are very comfortable with your situations, yourself, and your ability. Unless you encounter some tragedies, you won’t necessarily recognize these things about yourself.

One of our ESM members sent an email to pastors and at the end, he said.

The “Inner Voice” has been so helpful as I start each morning reading the email and a prayer.

He is struggling with his issue right now.

There is a very good drama. If you have time, you should watch it. It is called 멧돼지 사냥 – Hunting of Wild Boar. I won’t spoil it. It is about how their lives are all tangled up because of money. They don’t even know where it all started. Life becomes more and more tangled.

When you look at today’s story, the rich man was so self-indulgent that he couldn’t see anything else but pleasing himself.

There was a rich man who was dressed in purple and fine linen and who feasted sumptuously every day. (Luke 16:19)

Right after this verse, Jesus said this.

And at his gate lay a poor man named Lazarus, covered with sores, who longed to satisfy his hunger with what fell from the rich man’s table; even the dogs would come and lick his sores. (Luke 16:20, 21)

He feasted sumptuously every day but he didn’t even see a poor man right at his gate. He wasn’t even aware of his presence.

That’s what the riches may do to you. All you care about becomes how to please yourself. As though, that is the purpose of life. As though, it can give you true satisfaction.

That was what happened to the rich man. He went to hell not because he was rich but because his riches ruined his spirit. He didn’t even know what he really needed.

He asked Abraham to send Lazarus to his brothers to warn them. And Abraham said this truth. If the riches make them so blind that they cannot even hear God’s word, nothing will be able to open their eyes.

Let us reflect on our lives. Not many of us are so rich. But we all want wealth. We want to be comfortable. We want security. We want to live well financially. There is nothing wrong with that.

That is a sure way of losing your spirituality. Nothing will give you true satisfaction. Joy will slowly disappear from you.

Don’t make riches blind you but help you. Be rich not only to yourself but to others and also to God.

I talked about the rich fool last week. He had ample goods laid up for many years. He had his security insured. Now, he said to himself, relax, eat, drink, be merry. But God said to him, “You fool! This very night your life is being demanded of you.”

Then at the end, Jesus said,

So it is with those who store up treasures for themselves but are not rich towards God. (Luke 12:21)

Be thankful for what you have. Do not worry so much about your security. God will take care of you. Let money be your servant, not your master. Don’t spend all your money for yourself. Be generous.