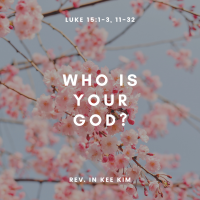 That’s what we hear in the creation story.

Then God said, ‘Let us make humankind in our image, according to our likeness.’ (Genesis 1:26)

So God created humankind in his image, in the image of God he created them. (Genesis 1:27)

Jesus gave us today’s story to tell us who our God is. He wanted to restore the true image of God.

Today’s story began with this.

Now all the tax-collectors and sinners were coming near to listen to him. And the Pharisees and the scribes were grumbling and saying, ‘This fellow welcomes sinners and eats with them.’(Luke 15:1, 2)

They were offended because Jesus welcomed sinners and ate with them. They were offended not for a cultural and moral reason but for a spiritual reason. They believed that God saw sinners as dirty and untouchable. So it was right for them to stay away from them too.

We can see where this kind of attitude could come from.

Listen to Psalm 1. The first chapter of Psalm is not only the introduction to Psalm but also to our life.

who do not follow the advice of the wicked,

or take the path that sinners tread,

What this passage teaches us to stay away from sinful way of living. But they conveniently separated themselves from the sinners and discriminated against them, saying that they were dirty and untouchable. They would not either welcome them or eat with them.

And when they saw Jesus welcoming the sinners and eating with them, they were upset.

In this context, Jesus gave today’s story. Today’s story is the last one of three stories.

All three stories were about those who were lost.

The first one is about the lost sheep.

Which one of you, having a hundred sheep and losing one of them, does not leave the ninety-nine in the wilderness and go after the one that is lost until he finds it? (Luke 15:4)

The second one is about the lost coin.

What woman having ten silver coins, if she loses one of them, does not light a lamp, sweep the house, and search carefully until she finds it? (Luke 15:8)

The last one is about the lost son.

He believed and hoped that someday he would come to his senses. That was exactly what the son did.

But when he came to himself he said, How many of my father’s hired hands have bread enough and to spare, but here I am dying of hunger! (Luke 15:17)

The father was waiting for the son to come to his senses. That waiting was painful and agonizing. That was the image of God Jesus tried to portray. God who suffers with us and because of us.

When the son came back, while he was far away still, the father was able to recognize him.

But while he was still far off, his father saw him and was filled with compassion; he ran and put his arms around him and kissed him. (Luke 15:20)

How did he know that he was his son? He knew right away because he was hoping every day that his son would come to his senses and come home. He was waiting every day. That’s why he knew.

There is Rembrandt’s famous oil painting, called, “The Return of the Prodigal Son”.

The image of the father in that picture is not a powerful, wise, dignified, and authoritative father but a weak, broken, tired, sad, and near-blinded old man. When you look at his hands, his left hand is a strong man’s hand but his right hand is a woman’s hand.

Henri Nouwen wrote beautifully about this story, using Rembrandt’s painting in his book, “The Return of the Prodigal Son: A Story of Homecoming.”

The Father is not simply a great patriarch. He is mother as well as father.

Rembrandt depicted who God was so well, better than any theologians.

We can see a feminine image of God in this father, not a patriarchal father.

The very moment the father saw his son from afar, this was what the father did. We will read that part again.

But while he was still far off, his father saw him and was filled with compassion; he ran and put his arms around him and kissed him. (Luke 15:20)

He was filled with compassion. The word, “compassion”, is “Rachamim” in Hebrew. It means womb love. It means mother’s love.

Isaiah saw that too in God.

Can a woman forget her nursing-child,

or show no compassion for the child of her womb?

Even these may forget,

yet I will not forget you.

God did not stay away from sinners. God actively reached out to the sinners.

Letting go of your son is as hard as possessing and controlling him.

When the son asked for his portion of the inheritance, the father could say no. After all, it was a great insult to the father. He didn’t die and yet his son asked for his portion of the inheritance. He had all the right to say no. Any father in Jesus’ time would have said no. Or even kick him out with nothing. But this father gave him what he wanted. That was the difference between the patriarchal father and this father. He let go of his son. This made the elder son angry. He probably thought in his mind, what kind of father are you? He lost respect for his father.

But he didn’t understand how hard it was for the father to let go. Physically he let go, but his mind was always on his son. He prayed every day for his son to return home. That is the image of God Jesus tried to teach us.

The Story of a Father

When we have the distorted image of God, we cannot know God in a real way. When Jesus taught them about God, they refused to accept his teaching. Because of their distorted image, they couldn’t understand what Jesus was saying. They didn’t like what Jesus did and said.

He was despised and rejected by others;

a man of suffering and acquainted with infirmity;

and as one from whom others hide their faces

This story is not a parable of a prodigal son. It is a story of a father who is in pain because of his love for his sons.

That’s how the story begins.