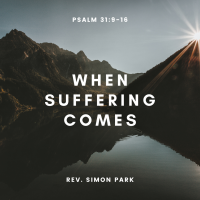 Some of our college students are graduating from McMaster University. When they were in first year, we started a Bible study together. We booked a room in the main library and met there each week. When they were in second year, they moved into a house together, and I would go there weekly and have Bible study with them. Then the pandemic hit, and two whole school years went by. I visited them a week ago to reflect on their journey through their undergraduate years. It was so nice to be together with them again.

We experience many things on the surface of our lives. That is real. But there is a lot that goes on inside of us too, and that is very real as well.

There are many good things that happen to us. They bring us joy, happiness and contentment in life.

But we also know that there are many things in life that leave their marks on us. Even long after those things have passed, their effects on us remain. When bad or unexpected things happen to us, inside of us we get hurt, wounded or fearful. Even after that thing has passed, the hurt, wounds and fear remain. At a given moment, nothing might be happening on the surface. Things may seem peaceful. But we can lack peace because the effects of bad things remain and continue to affect us. There are many words to describe the manifestation of what remains: anger, trauma, depression, fear, worries, numbness and many more. What remains from the bad things that happen to us is suffering.

We often think of suffering as what is happening to us on the outside at that moment. The world was shocked and grieved at the way civilians were killed in Bucha, Ukraine, some with their hands bound. They suffered before they died. But suffering is also about what happens inside of us even after events have passed. The families of those killed will suffer from grief, anger and confusion for a long time to come. Suffering from past experiences remain inside that person. We are often unaware of the suffering that resides in us.

Suffering is a fact of life. But how we respond to our suffering is the most important thing. One way or the other, our whole lives are a response to the suffering within us. Our fears, traumas and wounds can control us and dictate our thoughts and actions. Or the suffering inside of us can give us new purpose and perspective.

Today is Passion Sunday. Passion means suffering. On Passion Sunday, we remember the suffering of Jesus. We know that Jesus suffered physically when he was beaten and crucified.  But his suffering was much deeper than that. His real suffering took place inside his soul.

Jesus was filled with the Spirit and intimately connected with God. He was in tune with God’s will to love and heal others. But his acts of love and healing became threats to the ruling leaders who benefitted from a system that hurt those whom Jesus ministered to. Jesus’ teachings and actions implicated the leaders. Instead of changing hearts, people’s hearts became hardened. His actions only aroused more and more opposition. Jesus’ followers believed that their journey to Jerusalem was a journey toward victory and change. But Jesus knew this was a journey toward conflict, rejection and death.

Jesus suffered from fear, pain and heaviness in his heart. He was wracked with grief. In the Garden of Gethsemane, he expressed the depths of his inner torment to his closest disciples:

Luke records the intensity of his prayer in this way:

In his anguish he prayed more earnestly, and his sweat became like great drops of blood falling down on the ground. (Luke 22:46)

Today’s psalm describes well the suffering of Jesus. It reflects what he was probably praying in the Garden of Gethsemane.

Be gracious to me, O Lord, for I am in distress; my eye wastes away from grief, my soul and body also. For my life is spent with sorrow, and my years with sighing; my strength fails because of my misery, and my bones waste away.

I am the scorn of all my adversaries, a horror to my neighbors, an object of dread to my acquaintances; those who see me in the street flee from me. I have passed out of mind like one who is dead; I have become like a broken vessel. For I hear the whispering of many – terror all around! – as they scheme together against me, as they plot to take my life. (Psalm 31:9-13)

The gift of the psalms is that they give words to universal laments of the heart. They are the expressions of human suffering in our hearts. Jesus suffered the suffering of a human heart. But how he responded to his suffering is very revealing.

After hearing nothing but silence from God, this was his response:

Jesus’ response to suffering was faith. This is the confession of the psalmist, after articulating his deepest distress:

Jesus’ suffering was overwhelming, but inside of him was something more powerful than that – it was his faith. Instead of letting his fear dictate his actions, instead of escaping from his suffering, he took on his suffering with faith. Even after feeling forsaken by God, Jesus died with faith in God.

Faith is not something we can see on the outside. It is not saying the right words in front of others. It is not demonstrating it with religious actions. Faith is what resides inside of us.

Up on the cross, Jesus’ faith unto death revealed his true identity. It revealed the power of his faith over suffering. The centurion standing near Jesus saw him for who he really was:
Now when the centurion, who stood facing him, saw that in this way he breathed his last, he said, “Truly this man was God’s Son!” (Mark 15:39)

When faith is in us, it is a force more powerful than the pain, fear and wounds we receive from the bad things that happen to us. Faith is the power that frees us from the grip that our suffering has over us.

This is the power that St. Paul discovered in Christ:

Faith is a gift from God. Our own faith is weak, but God gives it to those who ask. The more we get to know Christ, the more we will become like him in our own sufferings.  We will develop the faith that Jesus had. Seek this gift of faith, even more earnestly when you are going through difficulty.

As we remember the suffering of Jesus, we ask for the faith that he had. That faith will unlock God’s power in your life. Your suffering will be the gateway to new and powerful ways of experiencing life.