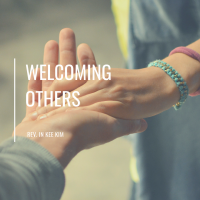 That’s the kind of culture that I grew up with when I was back in Korea. The whole village, the whole town was like family. I could go to anybody’s house and ask for food if I’m hungry. And then my friend’s parents, I’m like their son, they always provide something to eat. Korean culture is like that, anybody comes under your roof, you never send them away hungry. You always provide something to eat. I don’t know these days whether it’s like that in Korea or not. They live in condos and all that. But when I grew up, that was the culture that I lived in. And I thought it was just a Korean culture that I grew up with. But when I went to Africa they were exactly the same, they treated me like a precious person, the king, the most important person in the world, they tribute me with such a high respect. That’s what human beings are supposed to do to each other. And I thought it was just Korean culture or African culture, but it’s a biblical culture.

Treat Everyone as if They Were an Angel

When Abraham had three strangers and they were about to just pass by Abraham never let them go without feeding them. So, Abraham got lambs and they had a feast. And then later he realized that they were angels, not just strangers, but there were angels. And this is what the Hebrew writer said, “Do not neglect to show hospitality to strangers for by doing that, some have entertained angels without knowing it.” You entertain a stranger like an angel. That’s what we should do. Whoever we meet, we should really treat them like angels, welcoming strangers or somebody should be our basic human character and helping each other’s needs is basic humanity. That’s why we support the refugee program very strongly. And we invited an Afghanistan family.  I mean, last time we also invited a Syrian family. Our church sponsored these people to welcome the stranger to welcome people. And right now, they’re living are very well in this country, Canada.

During my vacation I went to Boston to visit my grandson, he’s a two-year-old. And when I got there, they had a big party for the second birthday of Charlie and the whole week they prepared all kinds of food, Kalbi, Chinese, skews and crab legs and all that, you name it. They prepared so much, and they decorated the Hawaiian kind of the theme of Moana. So, they had a Hawaiian theme and decorated the whole house. And then they said because we’re very busy preparing for this, can you welcome the people? So, I was there to welcome all the people who came, and I was talking with a neighbour, he came from Jamaica and I realized that he has 11 siblings, and he was talking about his life. And then one of his sisters, she was a dentist and she quit just like Simon and then became a minister. And we were talking and while watching them be hospitable to the people I felt good, that’s what we should do.

I once had a car accident while I was an intern moderator for Kitchener Waterloo church. You know Sunday afternoons, I’m very tired because it’s after service and all that. I get tired and I had a meeting in Waterloo, but it’s an hour away. When I was driving, I started falling asleep on the 401. I really pinched myself, I sang loud and then yelled and did all kinds of things. I tried to wake myself up and I barely made it and I was going off to highway 8 to go to Waterloo and – “finally I got here” and I fell asleep on highway 8 and by the time I woke up I was on the paved shoulder. I tried to control my car. It was winter, and I couldn’t control my car and it went into the ditch, luckily there was lots of snow in the ditch. So, I survived. That’s how I’m speaking to you now. But while I was there waiting for a tow truck for about an hour, almost every car stopped by just to see if I’m, okay. And later it kind of became you know a nuisance. And every time I came out and said, “I’m okay.” So, I just came out and told everyone, “I’m okay. Just pass.” Right, but at the time, I feel proud to be Canadian. They care when somebody is in trouble, they don’t just pass by, they care, they stop doing whatever they are doing, to see how I’m doing. That’s what hospitality is, that’s what human being should do to each other.

Once I took the eldest Korean in our church, I went to Niagara Falls and we’re under the roof. And then there were about four groups there. And I looked around all four groups. They were cooking their own thing and then there was a Korean group from another church and there is an Afghanistan group and then there were people from Brock University, geological society or something like that. And then while I was there, I was prompted by the spirit, somehow to go and visit them. They’re your neighbours, go visit them. So, you know, I’m kind of an introvert. I don’t really like talking to strangers and all that. It takes extra energy for me to do that. I was sitting there and I’m just comfortable with my group just eating kalbi and all this stuff, but the spirit kind of prompted me to go and talk to them. So, I went to this group and this person started talking to me and he started crying. He said his wife just passed away one month ago and he was so sad, and he was talking about his whole life and I was listening to him.

And then after saying bye, I went to the Afghanistan group, one of them said that he had 80 members of his family. One family was bigger than our whole group. When I went there, he brought his wife, his brother in law, sister in law, he introduced to everyone from his family. And I said to myself, this is what human life is supposed to be about.  We are not strangers to each other. We are all brothers and sisters in Christ. Hospitality, when new people come to our church, I hope that we can welcome them with love and appreciation. We should make them feel at home, comfortable.

Hospitality is a serving attitude. You serve other people’s needs, that should be at the bottom of all human life, not just Christian life, all human life. We need to serve each other’s needs. Jesus taught us that. He said, I did not come to be served. I came to serve, that’s what Jesus did, and he showed us what life we should live through his parable, the Good Samaritan parable. Somebody was in trouble and this person stopped doing everything and he went down to help that person. That’s what human life should be like. Jesus came to this world with a spirit of hospitality, but this world accepted him with hostility. They did not accept him. They treated him with hostility. He came with hospitality, but people treated him with hostility. This is what John said. “He came to what was his own and his own people did not accept him.” Lack of hospitality is a symptom of the darkness of sin. You don’t have that spirit of hospitality, that means you have the darkness of sin.

Exercise the Life of Hospitality

I hope that we can build up that kind of spirit, are the people who are in trouble around you? Are there people who are in need around you? Are there people who are in pain around you? They are your brothers and sisters. You cannot just neglect them. You cannot just pass by them. You must stop doing whatever you were doing and then take care of their needs. Be with them, pray with them, show them that you care. That’s what community is all about. That’s what humanity is all about. We should build that kind of world, and then you will be the first people who do that. Even though the world does not have it, we Christians should exercise the life of hospitality. There are a lot of people around you who need your care. They don’t say it, they sometimes suffer silently. Let us look around, who is in need and let us be their friends.