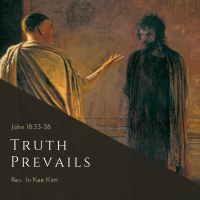 Today is Christ the king the Sunday we celebrate that Jesus is a king. There is a Church calendar, It’s different from the calendar we are using, and according to the Church calendar today is the last Sunday, and starting from next week the New Year begins. So New Year begins with waiting for the coming of Jesus. So 98.1 FM started playing carols starting from today, November 25th to December 25th, for one month, the whole day they play carols. Then this morning I came to church listening to the carols and preparing for the birth of Jesus Christ. So from next Sunday, is beginning with the first advent, the new year begins, it is already the last Sunday of the year. According to the church calendar, we confess that Jesus is our king, but today’s scripture tells us that Jesus’ kingship is very different from the kingship that we know, the kingship of the world. Through the mouth of Pilate the question of Jesus’ kingship came out, are you the king? Then Pilate, entered the headquarters and summoned Jesus and asked him, are you the king of the Jews?

This is a question to all of us too. Is Jesus King to you? And what does that mean when you say that Jesus is my king? Are you the king of the Jews? Pilate asked and Jesus answered him this way. “My kingdom is not from this world. If my kingdom were from this world, my followers would be fighting to keep me from being handed over to the Jews. But as it is, my kingdom is not from here”. Jesus clearly distinguishes Jesus’ kingdom and from the kingdom of this world. There is a difference between the Kingdom of Jesus and the Kingdom of this world. But Pilate really hated having to question Jesus, because he lived in Assyria, and it’s kind of far away from Jerusalem. He came all the way and Jews always complains and emit cases and all that. And again, they brought this matter up and Pilate had to come all the way to Jerusalem and question Jesus and summon Jesus, and Pilate did not really want to listen and did not have any patience to hear this kind of nonsense. When Pilate asked Jesus, are you the king? What he really wanted was just a simple answer. Either you’re king or not. Don’t say anything else. And Jesus was saying that my kingdom is not of this world and all that. He didn’t even want to hear it. He just wanted to deal with this matter as quickly as possible and go back home. As soon as he saw Jesus he instinctively knew that this guy’s not a harmful person, this guy is not a dangerous person who can do serious harm to the Roman government. He knew that those stubborn Jewish leaders were scapegoating this poor guy. I don’t know who that is, but this poor guy is just a victim of these very, vicious, stubborn Jewish leaders. He knew that. He just wanted to hear it directly from Jesus’ lips that he’s not a king. “He was not a king.” that’s all he needed to hear. So he bluntly asked again, so you’re a king, are you a king or not? Just tell me you’re not a king, then I’ll let you go. Simple as that. Don’t tell me about this world and my kingdom is not of this world. Don’t tell me any of that just tell me that you are not a king. I’ll let you go and the case is over. Pilate did not get the answer he wanted. This poor Jesus or naive Jesus did not give Pilate the answer he wanted. I mean, he could sense it, Jesus could sense it. Oh, that’s what he wanted, so then if I said I’m not a king, then I’ll be free. Jesus didn’t do any of that. He just did not give the answer Pilate wanted.

Jesus gave a very elusive answer. “You say that I’m king.” what did he mean by that? Is he saying that he’s a king or not? Jesus said, “you say that I’m a king”. Then right after that, Jesus said this “for this I was born and for this, I came into the world to testify to the truth. Everyone who belongs to the truth listens to my voice”. I think by this time Pilate got really, really frustrated. They were talking about whether Jesus was a king or not, and Jesus is all of a sudden talking about the truth. Pilate thought that what Jesus said was totally unrelated to the issue they were dealing with, so he got so frustrated and bluntly asked Jesus, “what is the truth?” What is the truth? He wasn’t interested in the truth. He was just frustrated. What is the truth? Then he went out and told the Jewish leaders, I find no case against him. Case is over, finished. I don’t see any wrongdoing in him.

That’s what we believe. What kind of power do we believe? The power of truth or the power of this world. Power of love or the power of people. The power of life or the power of the system. Pilate thought that he had all the power. He thought that he even had the power to release Jesus but in the end, he realized that he didn’t even have that power when people were really raising complaints against him, even though he wanted to let Jesus go, he could not let Jesus go. He had to crucify him. He didn’t have the power to let Jesus go. He didn’t even know that he didn’t have that power. He didn’t even know his powerlessness. The kingdom of power will perish with the power, but the Kingdom of truth will be forever. Your life of power will perish with the power, but your life of truth will remain forever. Jesus said, “Everyone who belongs to the truth listens to my voice.” We are the people who belong to the truth. Don’t be mistaken with your identity. Don’t live with power. Don’t value the power of this world. Don’t be mistaken with your identity. You are Christians. You are children of God. You are Jesus’ disciples who follow the truth, not the power. Don’t ever be mistaken with your identity.

God’s kingdom is not the kingdom built on the power that is visible in human eyes. God’s kingdom is a kingdom that we build with hope. It looks very small like a mustard seed, but ultimately it will become the biggest tree where the birds come and dwell and that’s what I believe. That’s what I believe for the rest of my life. For the rest of my life, that’s what we will do. Jesus’ kingdom is not built on power. It is built on your humble service. It is built on your love that embraces all. It is built on your sacrificial dedication. I pray that our church becomes that kind of kingdom. I pray that you become that kind of kingdom. You are God’s kingdom. This world will never be God’s kingdom. No, never, this world will never be God’s kingdom, but I pray that wherever you are, you may build the Kingdom of God. The Kingdom of God is not a physical structure. It is how you live, what you find inside you. It is about how you live. Pilate didn’t understand Jesus, but Jesus clearly showed what kind of king he was. That kind of King we serve. That’s why he died on the cross. He could crush them, but he just took the cross. When you deal with other people, don’t deal with them with your power, but deal with them with love and humility and service because we believe that kind of kingdom will last forever. Believe in the truth. The truth will prevail.