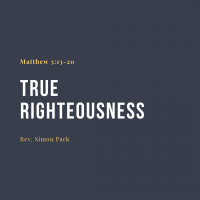 That last line, a new start with a life that belongs to you. That’s really the essence of our faith, right? And I want to talk today about true righteousness because that really relates to this new start that we begin with God. Today’s passage started with talk about salt and light, but I’m going to focus on the end of this passage first that talks about righteousness. And at the end, we relate that back to salt and light.

Righteousness to Enter the Kingdom of God

As you see, the scribes and Pharisees, they were seen as righteous. These guys were experts in the law. They knew them all and they practiced keeping the law. Now we’re talking about the law that was given to Moses back in the old Testament. The law was good. It was all about proper conduct. How to honor God and how to treat others. How to take care of those who needed to be taken care of. The law was good. And the scribes and Pharisees were the most righteous people in following the law. I mean, how could one be more righteous than them?

But you see, Jesus had tremendous insight. And in the gospel of Matthew, we see that for Jesus, the main beef he had, the main problem he had towards the scribes and Pharisees is that they ended up focusing so much on their own adherence to the law. They focused so much on that that it actually started to become all about them. The focus was centered on themselves. And then what happened was they started losing touch with those who could not be as righteous as them. They started to lose empathy and compassion and would instead start seeing them as sinners. On the one hand, they were very respected for their remarkable adherence to the law. “Wow. These guys, they know how to uphold the law.”

A Righteousness That Separates

But you know what? This elevated sense of righteousness separated them from other people. Other people start to feel inferior and lower. And then these leaders started to drink their own Koolaid. They began to start judging others based on the standards that they had worked so hard to live up to. Sorta like, “I worked hard to achieve this level of righteousness. So if you haven’t, you’re inferior.” That sort of thing. And then they began to associate only with people like them. Became like a club of those who met the standard of righteousness. They did a lot of the good works that the law prescribes, but it was starting to not stem from hearts of generosity, but more from their own need to be and feel good. And this righteousness separated them from others.

I think for us, just like them, we have our own notions of righteousness. To put it in our own words, like right living. Living the right kind of life, don’t you think? Our lives are consumed with trying to be good and doing the right things. We want to be a good son or daughter, a good parent, a good employee and just a nice person. That’s what we want to be. But here’s the thing. Our lives can become so focused on doing the right thing that it actually ends up becoming all about me. Am I doing the right things? Am I looking acceptable? Do I feel good about myself and what I’m doing? And if I’m able to live that right kind of life based on my own efforts, then it starts to separate me from those who have not met that standard. It’s kind of like, “Hey, I worked hard to get where I am and I deserve this. Others just need to step it up and figure it out.” We start to become a little judgmental. And that judgment separates us from those who are different. And then we begin to associate with those who have attained a similar level of the right kind of living as us. So we’re living out our own sense of righteousness or right living, but really all this focus on the right living stays on me. So we can become very self-centered and self-absorbed. See this kind of righteousness that we live out in the world, it begins and ends with me. And it separates us from others.

Living Out the Attributes of God

It sounds nice, right? But let’s be honest: who among us is truly like that? Put up your hand if that’s you. Who is so gracious, merciful, and loving? Be honest about yourself when you’re at home with your closest ones, loved ones. Who of us is really like that? I definitely am not. And so Saint Paul, he recognized the state of human beings and human nature. This is what he said in Romans, “There is no one who is righteous, not even one; there is no one who has understanding, there is no one who seeks God. All have turned aside, together they have become worthless; there is no one who shows kindness, there is not even one. Their throats are opened graves; they use their tongues to deceive. The venom of vipers is under their lips. Their mouths are full of cursing and bitterness. Their feet are swift to shed blood; ruin and misery are in their paths, and the way of peace they have not known. There is no fear of God before their eyes.” What an indictment of who we are. So true. I think deep down, we know this. We are not very proud of the people we are. And so we hide. We hide behind our appearances of niceness, being a good person, of living rightly, but Saint Paul called us out on the truth that we are not righteous. We’re too insecure and weak. You see, forgiveness sounds good, but not if you’ve truly wronged me. I can love only if you don’t mess with me. There is no one who is as patient forgiving and merciful as God is. So how are we going to enter this kingdom of heaven with God’s righteousness? It seems impossible.

Come Clean With Who You Are

For people who have suffered through low self-esteem or who have gone through a lot of issues, the paths of gaining confidence begins with self-acceptance. It means to stop pretending, to stop fronting, to come to grips with who one truly is. That’s the starting point. And that’s also the first step in the path to true righteousness. To stop pretending with our false righteousness. To come clean with who we really are. To admit, this is me saying this too, maybe I’m really not that nice of a guy. Maybe I ain’t that patient. And I ain’t that forgiving. Until we can come honestly clean with who we are, we will continue to live a life of illusion. Pretending that all is good as long as the outer surface looks good. But when we come nakedly honest before God with our true selves, God tells us this: you are loved. You are forgiven for all the bad things you’ve thought and done. And now my own righteousness I give to you. I call you to live out my righteousness, not by your own power, but by the power that I will give to you. All that you have to do is just accept and believe my word, what I’m saying to you.

So the question is, do you believe this? Do you believe this? Deep down, many of us probably feel like we’re unworthy of this kind of gift. There’s a sense of shame and unworthiness that causes us to hide behind the different clothes or layers that we put on. But God’s righteousness is given to us not because we are worthy or deserving, but simply because God loves us. That is grace. Can you believe that God truly loves who you are?

With the Righteousness God Gives Us

Little By Little, Every Day

God’s righteousness is what we should strive for with all of our hearts and to yearn for. This righteousness that reflects love, graciousness, mercy and passion for justice. Then we will be filled. And out of that filled self, the love will pour out of us. And then we will be salt and light. The path to God’s righteousness is a lifelong journey. And as you probably saw on the slide, there’s a song that we used to sing as kids. I think it captures our journey so well. It’s called little by little. I thought we’d try something a little different. Let’s sing this together if you know it because it really captures our journey towards righteousness. It goes, “Little by little every day. Little by little in every way. My Jesus, he’s changing me. He’s changing me. Since I made a turn about face I’ve been growing in His grace. My Jesus, he’s changing me. He’s changing me. My precious Jesus, I’m not the same person that I used to be. Sometimes it’s slow-going but there’s a knowing that some day perfect I will be.”