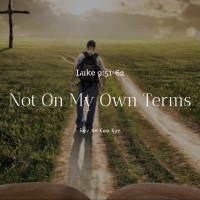 A Disciple, A Follower

We are the disciples who follow Jesus and Jesus teaches us about the disciples. Discipleship is in today’s passage. It wasn’t easy, though, to take what Jesus said. “Is that really the kind of discipleship that I can follow?” We wonder. Someone came to him and said to him, “I’ll follow you wherever you go,” with an enthusiastic tone. “I’ll follow you wherever you go, Jesus.” But Jesus was not very encouraging. Rather, he said, “Foxes have holes and birds of the air have nests; but the Son of Man has nowhere to lay his head.” I’m not sure whether he’s telling him to follow him or not, but he wasn’t very welcoming. He didn’t let another person even attend his father’s funeral. “You want to follow me? Forget about the funeral and you follow me.” And he didn’t even let another person say goodbye to his family. And he even said this, “No one who puts a hand to the plow and looks back is fit for the Kingdom of God.” Wasn’t Jesus too much? I just wanted to go say bye to my family first. And Jesus said this. Wasn’t Jesus too strict?

Life is not all about doing what we like. We cannot always handle life on our own terms. We cannot always go where we want to go. Sometimes life takes us where we don’t want to go. We don’t want to be there, but somehow life takes us there. I think the life of discipleship shows us that. A good example is Peter. Peter denied Jesus three times. You know that. And he felt really bad and Jesus came to him and he asked this famous question, “Peter, do you love me?” Three times, he asked this question. Through that process, Jesus wanted to restore Peter and then called him again. He wanted to restore his calling. At the end, before he told Peter to follow him, he said this very strange thing to Peter. This is what he said, “Very truly, I tell you, when you were younger, you used to fasten your own belt and to go wherever you wished. But when you grow old, you will stretch out your hands and someone else will fasten a belt around you and take you where you do not wish to go.” That’s what Jesus said to Peter.

Where We Do Not Wish To Go

Jesus did not want to go to Golgotha. Jesus, did not want to take up the cross. He even said, “Let this cup pass away from me.” But his life situation took him where he did not want to go. Discipleship is to accept our life situation as it comes, and live with courage and commitment. At the retreat, we talked about stories of faith. We examined the stories of Abraham, Jacob, Joseph, and Peter. Abraham sacrificed his son, Isaac. That was not what he wanted, but he showed radical obedience. He accepted his situation without putting his own agenda first, only trusting that God would somehow provide. Jehovah Jireh. Before, he tried to do it on his own and he made a lot of mistakes and he learned, but this time he showed his radical obedience. Some only believe that God will provide what is needed and God indeed provided everything Abraham needed.

My friends, we are all called to live with our own calling. Our life stories show that. As we look at our life stories very carefully, there is calling hidden behind the stories. Discipleship is to respond to that calling with faith. We are called to serve in love. Can you serve in your own terms? Can you love somebody with your own agenda? Can you serve the church with your own agenda on your own terms? We cannot follow Jesus on our own terms. That’s why Jesus said, “You want to follow me? But first deny yourself because you can not follow me on your own terms.” Deny yourself first and then follow me. Put down your agenda first. And then follow me.

Let yourself be bound to the needs of the people you serve. To the love for the people you love. We are bound to the needs of the people. We are bound to the love that we have for others. Put away your own terms and your own agenda. Simply serve them and love them. That’s what discipleship is. When you find something bigger and greater in life, you can put down your agenda because you saw greater things. Because life calling is bigger and greater than our own agenda. We cannot serve God as we feel like it. Jesus did not live his life on his own terms. He had an intimate relationship with God and listened to God’s voice and obeyed the voice. He responded to that voice with courage and commitment.

Last Thursday, I invited our younger staff to a restaurant downtown and they all came to my house. They stayed until 12 o’clock at night. I was so tired but they won’t go home. They’re sitting there and we’re talking. Simon, he’s already in his thirties. He’s too late. He’s already stuck. Now he’s going into ministry. He’s going to be ordained. I told Simon, “You’re too late. But you two.” They are in their twenties. “Do you really, really want to go into ministry? Do you want that? I’m at the end of my ministry. I’m telling you, do you really want to be in ministry? I mean, if I were born again, I would still go into ministry. But for you guys, twenties you can be a violinist. You can make a film; it still is not too late. You are only in your twenties.” And they all said yes. Without a doubt. We are blessed to have these kinds of youth pastors in our church, they are committed to that calling. So I told him, “If you’re not gonna stay in ministry, then know exactly what you want to do for the rest of your life. Through ministry, what do you want to do?”

All of us, we have a call. Behind the life stories, there’s a call hidden. Find that call and follow that. Living your life on your own terms is not the best way to live. It’s not cool to live like that. Following the call, that’s what a good life is all about. That’s what discipleship is.