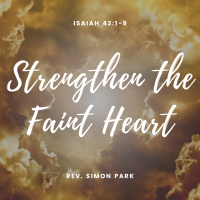 Last week, Rev. Kim introduced the image of storms. Over the last few years, we experienced many storms.  We are slowly emerging from them, and we see many ruins. 2023 is the year to start rebuilding from the ruins.

There were big storms that we all faced. We faced circumstances we had never experienced before. Some of you also endured difficult individual storms. Death of loved ones. Failing health. Strained relationships. Some of these storms made life very challenging and difficult. Some of them made us feel very weak and vulnerable.

When just one storm hits us, we can endure it and wait it out. But when many storms come one after the other, it can take a toll on us. When we get battered by continuous storms, we lose heart. We lose vitality. We lose vigour. Instead of being positive, we can become more gloomy.

When a very big storm totally destroys everything, where do we find the will to carry on? How do we find the desire and courage to pick up and rebuild? This was the issue that Isaiah faced. After Babylon came in and destroyed Israel, they lost everything. They lost their homes. They lost their land. They lost the institutions that gave them a sense of order and meaning. They were taken by force to a strange and foreign land. They were crushed. They were lost. They felt forgotten and abandoned by God. Many people lost heart and just wanted to survive without thinking. They didn’t know what to rebuild, or how to go about rebuilding.

Somehow, in this bleak setting, Isaiah heard God’s voice. He heard words of soothing and comfort:

Comfort, O comfort my people, says your God. Speak tenderly to Jerusalem, and cry to her that she has served her term, that her penalty is paid, that she has received from the Lord’s hand double for her sins. (Isaiah 40:1-2)

He heard assurance that they were not forgotten by God:

But you, Israel, my servant, Jacob, whom I have chosen, the offspring of Abraham, my friend; you whom I took from the ends of the earth, and called from its farthest corners, saying to you, “You are my servant, I have chosen you and not cast you off”. (Isaiah 41:8-9)

He heard words of affirmation that God still loved them:

But now thus says the Lord, he who created you, O Jacob, he who formed you, O Israel: do not fear, for I have redeemed you; I have called you by name; you are mine. (Isaiah 43:1)

He heard assurance that they would not be left alone:

When you pass through the waters, I will be with you, and through the rivers, they shall not overwhelm you; when you walk through fire you shall not be burned, and the flame shall not consume you. (Isaiah 43:2)

With this new hope, he saw a vision. God would send someone. A servant, chosen by God, given power with his spirit. That servant was given a mission:

The original Hebrew word for justice is mispat. Mispat is not a mere legal remedy. It is not about merely making wrongs right. It is making all things right. More than a definition, the word evokes more of an image. An image of restoring God’s order of compassionate well-being. Bringing about God’s true way and intended order. Of healing. Wholeness.

Mispat. This was the servant’s mission. It was not just a nice idea. It was a promise that God made.

He will not grow faint or be crushed until he has established justice (mispat) on the earth. (Isaiah 42:4)

God’s servant will not be stopped. He will be faithfully persistent. But God’s mispat will not be achieved by force. It will not be coerced. It is not violent.

A bruised reed he will not break, and a dimly burning wick he will not quench; he will faithfully bring forth justice. (Isaiah 42:3)

Sometimes when we are desperate, it doesn’t matter who we hurt in order to get what we need. Sometimes, when we are so hurt, we don’t notice the hurt we inflict on others. Sometimes the desire to undo wrongs and injustice leads us to commit the same wrongs on others who are even weaker than us. Our desiring often tramples over those who are weakest and most vulnerable. But this Servant will cause no further harm to those who are hurting. Instead, he will bring God’s mispat and peace to all.

Many years later, a small group of Jews came to identify their leader with this servant – that leader was Jesus Christ. They were heavily influenced by Isaiah’s words and imagery, and they interpreted the life of Jesus through them. Jesus himself saw his life through the words and images of Isaiah.

After John the Baptist was imprisoned, his disciples came to ask Jesus if he was the Messiah:

“Are you the one to come, or are we to wait for another?” Jesus answered them, “Go and tell John what you hear and see: the blind receive their sight, the lame walk, those with a skin disease are cleansed, the deaf hear, the dead are raised, and the poor have good news brought to them.” (Matthew 11:3)

These were all words and images from Isaiah. Jesus did what Isaiah said the chosen servant would do. Jesus was this chosen servant of God who came to bring mispat.

He will not cry out or lift up his voice or make it heard in the street. (Isaiah 42:2)

There is a time for us to cry out and make our voices heard in the streets. When George Floyd was killed, it was a time for people to cry out and lift up their voices for justice. There is a time to march in the streets to protest against injustice. To stand in solidarity with those who are hurting. Jesus spoke harshly against those who inflicted hardship on others. He turned over the tables at the Temple. He was scathing in his criticism of religious leaders. But there is also a time to be tender and walk softly. He welcomed little children. He was compassionate to the outcasts. He dined with sinners. He was most gentle toward the fragile and vulnerable.

Jesus may not have lifted up his voice, but he did not grow faint. He was killed, but not crushed. He rose again. His Spirit continues to bring mispat to people, to us.

The storms we faced damaged many things: our sense of normalcy, our routines, our sense of stability and security. But most importantly, they damaged our hearts. All the strange behaviours we’ve seen, all the anger and frustration we’ve witnessed, all the loneliness and isolation we feel, flow from damaged hearts.

Jesus came to restore us. He came to give us peace.

Peace I leave with you; my peace I give to you. I do not give to you as the world gives. Do not let your hearts be troubled, and do not let them be afraid. (John 14:27)

If your heart is troubled or afraid, I pray that you may receive the peace of Jesus. The work of Jesus will not be done until his peace is established over all the earth. This year we are going back to the basics: Knowing Christ. As we get to know Christ more, I pray that your hearts may be restored in him.

In 2023, let us not be afraid. Let us not lose courage. May our hearts be strengthened. And may we walk in the strength of the Lord.