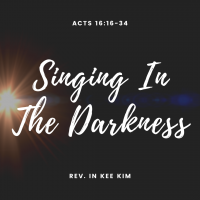 When you go to Europe, you will see so many beautiful churches and cathedrals. Their culture has been totally rooted and entrenched in Christianity. So many famous artists produced their master pieces with Christian ideas. So many genius musicians composed beautiful music with Christian themes. So many brilliant writers wrote wonderful books about spiritual ideas Jesus taught. Christianity has influenced the whole Europe. Politics, culture, art, architecture, and lifestyle.

Do you know where it all started? It was at Philippi. It all began from Philippi. We read the story today. This story was the beginning of European mission. Philippi was the first city in Europe to receive Jesus’ teaching through Paul. The entrance gate for the Europe mission.

It was Paul, Silas, Luke, and Timothy who started the mission to Europe. The very first European Christian was a woman and her name was Lydia. She was a business woman.

Paul did not plan to go to Philippi originally. He had somewhere else in mind. But the Spirit prohibited him from going to a place he wanted to go. And instead, the Spirit sent him to Philippi.

In fact, Paul was sick and he couldn’t go where he wanted to go. He had to go to Troas because there were hospitals. And there he met Luke. He was a doctor and also he was the author of this book, Acts. From there, Luke joined Paul to go to Philippi. That’s why Luke is using the word “we”. Because he was there too.

We set sail from Troas and took a straight course to Samothrace, the following day to Neapolis, and from there to Philippi, which is a leading city of the district of Macedonia and a Roman colony. (Acts 16:11, 12)

Luke stayed on in Philippi and Paul went to Thessalonica. Luke used “they” instead of “we”.

After Paul and Silas had passed through Amphipolis and Apollonia, they came to Thessalonica, where there was a synagogue of the Jews. (Acts 17:1)

Luke saw all this as the work of the Holy Spirit. That was how Luke saw his life. There may be visible reasons why we did this or did not do that in our lives. Why you chose to go to that school. Why you chose that job. You may have human reasons to do that. Obvious, Visible Reasons!

But behind it all, there is the work of the Holy Spirit. Paul was sick and that’s why he couldn’t go where he wanted to go but instead, he went to Troas. But Luke saw it as the Spirit blocking him from going to where he wanted to go and sent him instead to Troas. That’s why Paul went to Philippi and Luke joined him. I agree with the way Luke saw what was going on in his life.

The Work of The Spirit

I thank my God every time I remember you, constantly praying with joy in every one of my prayers for all of you, because of your sharing in the gospel from the first day until now. I am confident of this, that the one who began a good work among you will bring it to completion by the day of Jesus Christ. (Philippians 1:3-6)

Paul never imagined what he was doing at Philippi would be the beginning of occupying the whole Europe. A small thing he started became so big. Paul didn’t know that what he was doing was that important. But he had confidence that the one who began a good work among them would bring it to completion by the day of Jesus Christ. That is the power of the work of the Spirit

That was exactly what Jesus said.

He said therefore, ‘What is the kingdom of God like? And to what should I compare it? It is like a mustard seed that someone took and sowed in the garden; it grew and became a tree, and the birds of the air made nests in its branches.’(Luke 13:18-19)

He believed that behind everything he did, there was God and he would make everything beautiful. This belief gave Paul joy.

Singing in the Darkness

Mission at Philippi wasn’t easy in the beginning. The first thing that happened to Paul was injustice, flogging, and imprisonment. He experienced racism there. Anti-semitism.

When they had brought them before the magistrates, they said, ‘These men are disturbing our city; they are Jews… (Acts 16:20)

He was arrested unjustly and flogged unlawfully.

He was probably whipped 39 lashes. In other letters, Paul said he was whipped 5 times of 39 lashes. A typical whip had several strands of leather and at the end, there was either a bone or metal attatched. So you don’t get just bruises but your skin becomes ripped apart. They were half-dead after the flogging.

Then Paul and Silas were thrown into the innermost cell. The darkest part of the prison. In the basement. No light and it was pitch dark.

Paul could have wondered or questioned. The Spirit blocked me from going where I wanted to go. And he sent me here to die?

He could have wondered and questioned but he didn’t. What did Paul and Silas do? They prayed and sang hymns to God.

About midnight Paul and Silas were praying and singing hymns to God. (Acts 16:25)

What gave them this joy? They were singing in the darkness. Negative spirit didn’t control them.

We may live with human joy. It is great to have it. But when the storm comes, it will drive away the human joy we have. Like last Saturday, storm blew away many trees and branches all over the place. I got flat tires too because of debris.

With that joy, Paul and Silas prayed and sang hymns to God. Their singing must have been beautiful. It was midnight. At night, sound travels further. Everything was so quiet. Other prisoners were all sleeping. They could have said, “Shut up.” But what did they do?

About midnight Paul and Silas were praying and singing hymns to God, and the prisoners were listening to them. (Acts 16:25)

Do you have that joy? To Paul, joy was not just a good feeling. It was the power, the power to move forward. It is the power to defeat the evil. The imprisonment could not take this power away from him.

Joy is a big thing for Paul. He wrote this to the Christians at Philippi.

Rejoice in the Lord always; again I will say, Rejoice…Do not worry about anything, but in everything by prayer and supplication with thanksgiving let your requests be made known to God. And the peace of God, which surpasses all understanding, will guard your hearts and your minds in Christ Jesus. (Philippians 4:4, 6-7)

God will lift you up. God will give you the strength to move on.

We are very saddened by what happened in Texas. I was angry. I pray that God may give the grieving families the peace, which surpasses all understanding.

Can we sing in the darkness? Yes, we can. When there is, within us, joy God gives us, we can.