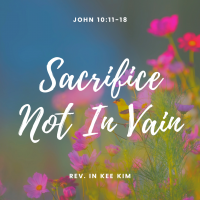 I have this question.

So when you read the gospels, all the gospel writers tried to answer this question. They tried to make some sense of Jesus’ life and his death. They all tried to portray the beauty of Jesus’ life. Jesus lived a good life. Admirable life. He helped a lot of people. He healed them. He fed them. He freed them from the evil power. He restored their dignity. He gave them hope. He showed them how to live a good and happy life. First time, the disciples experienced the excitement about life they never had. That’s why they gave up everything they had and followed Jesus. He lived a good life.

But in the end, what did the people do to him? They arrested him, framed him, falsely accused him, tortured him, and sentenced him to death. They crucified him. Why did such a bad thing happen to a good person? The disciples all struggled with this question. The gospel writers all asked this question. Jesus became a victim of the evil system.

The Trial of George Floyd

LAST TUESDAY, I was anxiously waiting for the verdict of the jurors for the trial of George Floyd. It didn’t take a long time for them to come up with the verdict and so I felt hopeful. But still you never know. So I was anxious. And finally, the verdict came. More than anything else, just RELIEF. I could breathe. That was what killed George Floyd. He couldn’t breathe. People in Minnesota, as a matter of fact, the whole world held their breath to see the result of this case. When the verdict came, we were all able to breathe. I could feel the tension in the city being relieved. Justice prevailed. Justice has been served. 12 jurors brought justice back to the court.

But in Jesus’ case, the justice was not served. The innocent man was sentenced to death. The evil system put the innocent man to death. Jesus helplessly became the victim of the evil hands. WAS JESUS SIMPLY A VICTIM OF THE UNJUST JUDICIAL SYSTEM OF JEWS AND ROMANS?

The writer of the Fourth Gospel, John said NO. That was what we heard today in the reading we had. Jesus clearly said that he was not merely a victim.

Jesus gives us A VERY INTERESTING METAPHOR about his life. He used THE METAPHOR OF THE GOOD SHEPHERD AND THE HIRED HAND.

I am the good shepherd. The good shepherd lays down his life for the sheep. The hired hand, who is not the shepherd and does not own the sheep, sees the wolf coming and leaves the sheep and runs away—and the wolf snatches them and scatters them. (John 10:11, 12)

Jesus is the good Shepherd. He had the power to live out his beliefs. He kept the truth. He fought the good fight. He did that for our sake. He showed us what good life was. He showed us how we ought to live.

When he said, “Good Shepherd”, THE WORD GOOD IS “KALOS” IN GREEK. Raymond Brown said, it means “beautiful” in the sense of an ideal or model of perfection. GOOD SHEPHERD MEANS MODEL SHEPHERD. Jesus is our role model. We follow the good shepherd. We follow the beautiful example of Jesus. Jesus chose to stand on the side of justice, instead of bending down to the evil system. He didn’t give up his beliefs for the sake of saving his physical life. He pursued something bigger than saving his physical life. God loved what Jesus did.

The Value of Sacrifice

For this reason the Father loves me, because I lay down my life in order to take it up again. (John 10:17)

JESUS KNEW THE VALUE OF WORTHWHILE SACRIFICE. Jesus knew God would never waste that sacrifice. It is too precious to be wasted away. God will use it to create life. God made our life that way. Life is created as the result of sacrifice. Without the cross, there is no resurrection. That’s why Jesus said this in two chapters later:

Very truly, I tell you, unless a grain of wheat falls into the earth and dies, it remains just a single grain; but if it dies, it bears much fruit. (John 12:24)

Jesus gave us A BEAUTIFUL IMAGE OF SACRIFICE. It is like A SEED FALLING INTO THE EARTH AND DYING. That is what sacrifice is. The seed that is sown in the soil. Ultimately the seed will bear fruit. Jesus gave a tremendously positive hope and value to the worthwhile sacrifice. The cross was the archetype of all the beautiful sacrifices that were made. Many people took up the cross and followed the way of Jesus. They were not intimidated by death. They did not fall into the sweet temptation of the evil. They kept the faith and fought the good fight. The cross symbolizes not just the victimhood. It symbolizes the courage and power of the people who pursue what is right even though they may face trials, temptations, and unjust circumstances.

Living for What is Good and Right

WE ARE THE SHEEP who follow the good Shepherd. The good shepherd showed us the way. He showed the example of what a good sacrifice does. As we live our lives, let us remember this good example. We don’t like suffering. Nobody likes suffering. But when we choose doing what is right, often suffering comes. Then we will choose suffering. Without suffering, good life is not possible. Let us not be scared of suffering. Don’t let the suffering scare you and deter you from doing what is right. Suffering is a seed that produces endurance, and endurance produces character, and character produces hope. That hope will never disappoint us.

There are SO MANY INJUSTICES going on in the world. What happened in the Minnesota court room was very rare. I hope that this case may not be forgotten but may be remembered and used as a good example that justice prevails. Sacrifice is not wasted. There are many people in the world who have been unjustly sacrificed and their sacrifices will never be wasted. God will use them to become a seed where true justice blooms. Even though it may involve sacrifice, let us continuously pursue what is right and just. And let us be in solidarity with those who are unjustly treated wherever they may be.