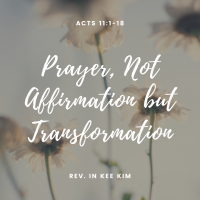 It is a very interesting story and a weird story. Many of you may not even understand what the issue is here. What’s with these animals and eating them? Why was Peter so reluctant to eat them? There are a lot of questions to be answered. It is hard to make sense of this story unless you understand the culture of that time, 2000 years ago. But I won’t go there.

Peter was praying and he had this weird experience.

I was in the city of Joppa praying, and in a trance I saw a vision. There was something like a large sheet coming down from heaven, being lowered by its four corners; and it came close to me. As I looked at it closely I saw four-footed animals, beasts of prey, reptiles, and birds of the air. (Acts 11:5-6)

I don’t know exactly how Peter saw this. Was it a dream? Did he fall asleep while praying? Or did he have some kind of supernatural vision? We don’t know. But that was what he saw. Not only he saw this wonderful vision but he also heard a voice and the voice said to Peter,

By no means, Lord; for nothing profane or unclean has ever entered my mouth. (Acts 11:8)

Peter was very reluctant. Because all his life he believed that these foods were unclean and so he didn’t eat them.

But the voice told him to eat. This voice was supposed to be the voice of God. That was hard to take for Peter.

The voice not only told Peter to eat it but it also said,

This happened three times. So it was quite clear to Peter. It wasn’t what Peter misheard. It was a clear message.

But Peter’s prayer was not like that. In prayer, Peter’s old belief was challenged. What he believed about what was clean and what was not clean was challenged. His attitude, his perspective, and his belief were all changed because of his prayer. Because he met God who was greater than himself. That is what true prayer is like.

Peter’s prayer was very different from that kind of prayer. Jesus’ prayer in Gethsemane was the same. What Jesus wanted was not affirmed. What he wanted was not granted. Jesus knew clearly the difference between his personal desire and God’s desire for him. That’s spiritual maturity.

St. Paul’s prayer was like that too. Once St. Paul prayed because he had thorn in his flesh. We don’t know exactly what that thorn was. But it tormented him. It hindered not only his ministry but also his life. He prayed to God three times. Again three times. He prayed that God might remove these thorns. But God didn’t. What he wanted, he didn’t get through prayer. He knew clearly what he wanted and what God wanted. That is spiritual maturity.

God did not remove the thorns but instead, God gave him this great insight.

My grace is sufficient for you, for power is made perfect in weakness. (2 Corinthians 12:9)

In this sense, being spiritual is difficult. It makes you go where you never went before. It challenges you to change who you have been. It forces you to see who you really are but also challenges you to go beyond yourself. Not only you become real to yourself but you can also take the challenge to become somebody you had never been. You always had that self within you but you were too scared to become that person. The Spirit gives you the courage to be that person.

You become naked but you are not alone. God’s grace envelops you.

This was a huge change. Two weeks ago, we reflected how Jesus restored Peter’s calling by asking him three times, “Do you love me?” This time, God had to change Peter’s thinking.

Today’s story was not just about food. This was about his attitude towards other people, especially people who were different from him.

At that time, Jewish people did not associate with Gentiles, non-Jews. They considered going into Gentile’s house as becoming unclean.

During Jesus’ time, a Roman solider came to Jesus and asked him to heal his servant but knowing that Jews would not come into Gentile’s house, he said,

Lord, I am not worthy to have you come under my roof; but only speak the word, and my servant will be healed. (Matthew 8:8)

God had to help Peter and the early Christians to overcome this prejudice.

The Power of Prayer

That’s why God appeared to Peter in his prayer. Peter courageously accepted what was very uncomfortable for him. He was able to distinguish what he was familiar with from what God wanted. He was able to open the door to the mission to Gentiles. Once this prejudice was lifted, the Spirit was able to use freely these early Christians to reach out to Gentiles without any restriction.

St. Paul also understood God’s desire to want to include Gentiles. So he had to confront a lot of problems. His own people hated Paul because of this kind of attitude of Paul toward Gentiles. He went much further than Peter. No circumcision, no dietary rule, and no distinction between Jews and Gentiles.

That is the power of prayer. Prayer does not just affirm your small world. Prayer opens up a new world that you could never imagine. Be people of prayer. You will see what others don’t see.