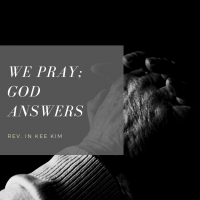 Today’s Scripture passage is taken from the first Samuel Chapter 1, verses 4 to 20. It is a story about Hannah, and in her prayer on the day when Elkanah sacrificed, he would give portions to his wife, Peninnah and to all her sons and daughters too, but to Hannah, he gave a double portion because he loved her. Though the Lord had closed her womb, her rival used to provoke her severely to irritate her because the Lord had closed her womb, so it went on year after year as often as she went up to the house of the Lord. She used to provoke her, therefore Hannah wept and would not eat. Her husband Elkanah said to her, “Hannah, why do you weep? Why do you not eat? Why is your heart sad, am I not more to you than 10 sons?” After they had eaten and drunk at Shiloh, Hannah rose and presented herself before the Lord.

Hannah Presented Herself Before the Lord

Now, Eli, the priest was Eli. The priest was sitting on the seat beside the doorpost of the temple of the Lord. She was deeply distressed and prayed to the Lord and wept bitterly. She made this vow: “Oh Lord of hosts if only you will look on the misery of your servant and remember me, and not forget your servant, but will give to your servant, a male child then I will set him before you as a Nazirite until the day of his death, he shall drink neither wine nor intoxicants and no razor shall touch his head, as she continued praying before Lord Eli observed her mouth. Hannah was praying silently. Only her lips moved, but her voice was not heard. Therefore, Eli thought that she was drunk. So, Eli said to her: “how long will you make a drunken spectacle of yourself? put away your wine.” But Hannah answered, “No my Lord. I’m a woman, deeply troubled. I have drunk neither wine nor a strong drink, but I have been pouring out my soul before the Lord, do not regard your servant as a worthless woman. For I have been speaking out of my great anxiety and vexation all this time.” Then Eli answered, “go in peace the God of Israel, grant the petition you have made to him” and she said, “let your servant find favour in your sight.” Then the woman went to her quarters, ate and drank with her husband, and her countenance was sad no longer. They rose early in the morning and worshiped before the Lord. Then they went back to their house at Rama.  Elkanah knew his wife Hannah, and the Lord remembered her. In due time, Hannah conceived and bore a son, she named him Samuel for she said, “I have asked him of the Lord.” This is the word of the Lord.

We’re going to talk about Hannah’s prayer. It’s a very famous prayer, through her prayer, a very famous and great prophet, Samuel was born. You have probably heard the name. Samuel is one of the greatest prophets in the Old Testament. Hannah’s prayer has been known as one of the greatest prayers of mothers, like St. Agustin’s mom, Monica. And Hannah’s prayer, these are great prayers of mother’s in her prayer. She vowed, “Oh Lord of hosts if only you will look on the misery of your servant and remember me and not forget your servant but give her, a male child, then, I will set him before you as a Nazirite until the day of his death.” And she was dedicated, even before Samuel was born, she dedicated her child to God and I believe that she must have raised her son as she vowed so that he could be the great Samuel.

I’m sure Hannah made a great contribution to make Samuel be Samuel. So, she was a great woman of prayer. That’s true. But today, when you look at Hannah’s prayer very carefully, it is a very self-centred prayer. It’s not really holy in that way. Her prayer was neither a noble prayer for God, God’s work in this world, nor for the country, nor for the holy purpose. She prays simply because she was hurt and humiliated and angry, and she was provoked by her rival. She was personally attacked, that’s why she prayed. So, it was a very self-centred prayer, when I go over the story once more.

Hannah Could not Bear a Child, she felt Rejected by God

Hannah was a wife of Elkanah. Elkanah had two wives at the time, polygamy was kind of acceptable. Jacob had two wives too. And Moses had a few wives and Elkanah had two wives. One was Peninnah, and the other is Hannah. Unfortunately, Hannah had no children and there was no problem with her husband Elkanah. Elkanah did not give any trouble to his wife because she cannot bear a child, rather, Elkanah showed greater favour to a Hannah. He gave a double portion when they went up to the temple, they gave sacrifice and each one brought a portion and Elkanah gave Hannah a double portion. So, he was very good to her and he even said that “you know, am I better than 10 sons? Why are you so troubled by the fact that you don’t have a child?” But that didn’t help. Peninnah constantly provoked Hannah for her barrenness. Hannah could not stand the humiliation that she went through because of Peninnah’s personal vendetta, personal hurt. Maybe, she could not stand the fact that she could not bear a child. Not just Peninnah. What Peninnah did was just rubbing salt into her wounds. That’s all. But her problem was the fact that she could not bear a child. I mean it’s not a problem in modern days and some people even choose not to have any children, but at that time it showed the dignity of a person, of a woman. So she felt like she was not perfect. She felt like she was missing something. She felt like she was kind of rejected even by God. That’s why she prayed nothing else.

Even though she made a vow, the vow was like a negotiation, listen to the vow, “oh lord of hosts. If, it’s a big if, if it’s a condition, if only you will look on the misery of your servant and remember me and not forget your servant, but will give to your servant, a male child. Then I will set him before you as a Nazarite until the day of  his death is conditional.” Well she won, it was a male child, nothing else. What she wanted was to be set free from her misery. What she wanted was her pride being restored. She wanted to live with pride. Not with the stigma that she cannot have a baby, nobody could solve her problem, even Elkanah could not solve her problem. That is something that she had to deal with. Her prayer was so fervent, so passionate that the priest Eli thought that she was a drunk.

Praying for our own Problems Invites Real and Fervent Prayer

Through Hannah’s Powerful Prayer God gave her Samuel, one of the Greatest Prophets

But the amazing thing has God answered Hannah’s prayer and through Hannah, God gave Samuel, one of the greatest prophets. Samuel was born in a very, very critical and important time of Israel. Israel before Samuel was like a tribal nation. It was like a little tribe, and then they wanted to make a kingdom, so they wanted four kings, so when Samuel was born, Israel changed from a tribal nation to the kingdom, and then Samuel anointed the first King Saul, and then he also anointed David, King David who was born with that fate.

God has Hidden Plans for each and Every one of us

Through all this, I was thinking about God’s providence. Providence is like God’s, hidden plan, and God’s hidden word. There is an invisible work of God. I call it providence. We don’t know it, but behind the surface, there is tremendous work of God that is done in a hidden way. I’m amazed at how God works in our lives. Whatever happens to you as a person, it’s not just a personal matter. It has a bigger implication in your life. What happens to us is not just about us, it has an implication for the bigger things in life. It is to do with God’s Providence, even the selfish prayer of Hannah, God used. Even the selfish prayer of Hannah was used to move God to make an impact on our history. That was amazing to me, I thought God only listened to real prayer, sincere prayer, faithful prayer and the religious spiritual prayer, but God even used the selfish prayer of a woman to bring out his work.

God Works out his Wonderful plan, even Through our Imperfect Prayers

I believe that that is the power of prayer. Our prayer is very small and limited in its scope and many times and often most of the times it is very self-centred. It is about us. It is about our own personal needs. Who can pray? Knowing God’s great plan or Providence. But God works out his wonderful plan, even though our imperfect prayers, and I learned this about prayer. Prayer has many layers, I realized. It’s not just one layer in prayer, there are many layers. We may see only one layer and praise at the very basic level. That is the level of our personal needs, but your prayers have many layers that we don’t see. In that sense, your prayer is a mystery. It opens a new world that you don’t know. When you pray it may be your prayer, but once your prayer is done it’s not yours anymore. It God’s to use. When I pray, while I’m praying, it is my prayer, but once that prayer is done it is not in any more mine. It is in God’s hands and God uses that prayer to work out his own plan. So, we don’t know the result, no one prays knowing the result.

Prayer is not like a vending machine that you know exactly what to get. You put a coin and then that thing comes up. Prayer is not like that. When you enter into the prayer, you enter with one expectation, but you come out of it with a totally different answer. That’s what prayer is. I pray that your prayers may bring about beautiful results, not only for yourself but also for others. You may have prayed personally only for your personal needs, but your prayers may open up a new world for other people. How much more powerful your prayers can be used if you pray for others and for God’s holy purpose

Let’s Confront Our Problems with Prayer

Today is the last Sunday and the last day of 2017. May your 2018, be the year of offering many prayers so that you may experience the world you never experienced before. 2017 was great. We have experienced a lot of things in 2017. We prayed without knowing what the result will be, but God answered it in a way that I could never imagine. That was like 2017 and 2018 God has many things in store for you, use your prayers. Offer your prayers, don’t think about whether it’s a selfish prayer or self-centred prayer. Don’t think about it too much. Just offer your prayers and God will use them for a wonderful result. And as I said before, when you have items to worry about, turn those items into prayer topics.