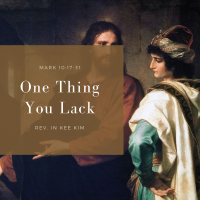 That should be our existence and thank you, John, for leading us in very meaningful prayer and devotion. That is what worship is about, we are not here just to go through the motion of worship, but we want to be connected with God. Today’s story is a very difficult story for us to enjoy it simply, comfortably. It disturbs us. It shakes us to the core. It was even hard for the disciples who gave up everything to follow Jesus, so they asked Jesus, “Then who can be saved, who can be saved?”. If that is how to be saved, who can be saved? It was a hard message for the rich man to take, so he went away sad when heard this, he was shocked and went away grieving, for he had many possessions. Very hard message. This man was a good man. He had a pure heart and he was sincere. He was not one of those who are rich and squander his money, enjoying the pleasure of this world, doing this and that. He was now one of those. From when he was young, he was very sincere. He kept all the commandments faithfully. He was a very nice guy. The scripture said that Jesus loved him. Jesus looking at him loved him. You know, Jesus was able to see through people. Jesus did not see just what they look like on the surface. Jesus did not just see what they were doing. Jesus was able to see the core of someone’s heart, and Jesus said he loved him. Jesus was not fooled by so-called great people, but he loved him. So he must have been an extraordinary person for even Jesus to love him.

His Life Was Not Enough

Then I asked myself, why did this man come to Jesus from the first place? Why did he come? He had everything. He was living a good life. He had wealth. He was well respected by people and people who live such a good, upright life. People love him. People respect him. So he had all the respect from the people. He had everything we could ask for in a person, but he came to see Jesus because he felt that there was something missing in his life. His life was not enough. He had this nagging thought, he felt that he lacked something in his life. Many people in his shoes would not even have been bothered, would not have struggled at all. I’m living a good life. No, God blessed me with wealth and I’m doing all the right things. So why do I struggle? So people in his shoes, most people will not even struggle. But he struggled. He struggled. He felt that life was more than what he had. That itself shows us that he was a decent man. That’s why Jesus loved him. He wasn’t cocky. He always felt that there’s something missing in my life. I’m reading a book by Haruki Murakami. The title is ‘Absolutely on Music’. He wrote about Seiji Ozawa, a very famous conductor. He was a conductor of TSO, but Berlin and New York and everywhere, he is a very well established conductor. And then he said he and Haruki Murakami was a nominee editor for the Nobel prize for literature. But he failed to get it. But he said he and I are very similar. Seiji Ozawa, when he has all the scores of music until he reads it, it’s not music to him, not just listening. He sees the music and then every morning, four o’clock in the morning, he gets up and he reads and reads, over and over again to interpret the music and Haruki Murakami, same thing. Every morning he wakes up and then always writes for many hours and they said, we must dig deeper, forge farther ahead. They felt it’s not enough. I have to go further. I mean, people in their shoes who say, you know, I’m a good writer or I’m good magician, but they felt, that’s not enough,

This man was like that. Jesus just told him you lack one thing. He said this not to criticize him nor rebuke him. That was exactly what that man was feeling inside. There is one thing that I lack and Jesus simply confirmed his role. Yes. As you feel you lack one thing. Then Jesus said to him what that one thing was and that was like a bomb to this man. Rich man. He said, “Go, sell what you own and give them money to the poor.”. This statement was like a bomb to him, Why? Because he knew that that was his problem. He struggled with that problem all his life and then Jesus pointed it out right in front of him and he knew exactly what he lacked. That’s why it was like a bomb to him. That was his core problem. Attachment to wealth, attachment to his money. The problem of rich people is this attachment. That’s why Jesus said, “It is easier for a camel to go through the eye of a needle than for someone who is rich to enter the Kingdom of God.” Camel going through the eye of the needle is kind of comic, the kind of image. It’s impossible. Impossible. It is impossible for the rich to enter the Kingdom of God. Basically, that’s what Jesus is saying. Not because they’re rich, but because of their attachment to money.

As we reflected last week, the problem is not the money. The problem is the love of money. The love of money takes away our joy in life. It creates so many problems. Love of money causes exploitation, oppression and injustice and love of money brings violence in this world. Because of money, they kill each other. It creates constant dissatisfaction within us. But it’s so hard to overcome our love for money because money can do so much for us. Even this man in today’s story, he was a good man, but because he loved his money so much that he couldn’t take what Jesus said. When he heard this, he was shocked and went away grieving for he had many possessions. We realize how hard it is to let go of our love for money. But he was so shocked, what Jesus said was so loud he could not finish. He could not really listen to what Jesus said in the end. When Jesus said, “Go sell all your possession and give to the poor.” That was so loud, he could not hear the next sentence. Jesus said, “You will have treasure in heaven.” Jesus did not mean just treasure stored in heaven, but the treasure that would come from heaven.

That’s how I read it. When Peter said, “I give up everything to follow you.” And this is what Jesus said, “Truly I tell you, there is no one who has left the house or brothers or sisters or mother or father or children or fields for my sake, and for the sake of the good news, who not receive a hundredfold now in this age, not in the age to come, but in this age you’ll get that. Houses, brothers, sisters, mothers, children and fields and with persecution.” He added that with persecution and in the age to come, eternal life. My friends, God will provide what we need and he will provide it abundantly. You don’t need to have a love for money to have your needs provided. It is important to believe this. That’s how we don’t become slaves to money. You don’t create abundance. Abundance, God gives to you as a gift. You don’t achieve salvation. You don’t make salvation. Salvation, God gives to you as a gift. When the disciples were shocked at what Jesus said and asked him, “Then who can be saved?” Jesus said this, “For mortals it is impossible, but not for God. For God, all things are possible.” Even letting go of your love for money is not what you can do. You cannot do it with your efforts. Only God can help you do it. A good example is Zacchaeus. Zacchaeus was a tax collector. Tax collectors were hated by people. Why? Because they ripped off people, their own people. The Roman people are very smart. They said, okay, from Etobicoke, you get a million dollars, you give me a million dollars tax. Whatever you collect beyond that, it is yours. So tax collectors went to Etobicoke and they tried to get as much as possible. If they collect $1 million, $100,000, a hundred thousand dollars, it’s theirs. If they collect $2 million and then $1 million is theirs. So they ripped off and Zacchaeus was a tax collector. But through Jesus, he met God. When he met God, his salvation was not the salvation of the soul, the salvation of anything else. As soon as he was saved, he dealt with his money problem. When he experienced salvation, he said, okay, all my money, half of it I’ll give to the poor, and then if I rip off anybody, I will pay back four times. So I sat down and calculated, okay, let’s say $10,000 he had, and then conservatively he ripped off 10% probably more, but only 10% he did. So then $5,000 he will give and then 10% thousand dollars times four $9,000 so out of $10,000 he’ll give $9,000 as soon as he was saved, as soon as he experienced God, he was completely free from the love of money. Before he lived the low life just for the sake of money. Only God can do it, not your effort. Only when you meet God in a meaningful, real way, real way, then you can let go of your love for money. Very concrete, very concrete. Meeting God is not abstract, meeting God is not emotion. Meeting God is very concrete.

I think today’s story is not ended here. This rich man went away sad, but I believe that Jesus’ words to him became a steep seed deep in his heart. Became a seed in his heart, always there. Whenever he saw someone poor, it was there. All his life, this encounter, he remembered, I’m sure he must have changed in the end and he became free from his money. His love for money. That’s what the legend says too, about this rich young man. God wants to bless you abundantly, but if you are enslaved by your love for money, even God cannot help you. Last week I said, money is not given to us just for us. Money is given to us to use it for a good purpose. That’s what money is for.