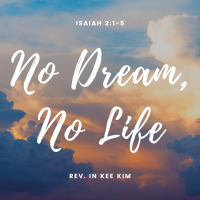 John Lennon sang he was a dreamer in his song, “Imagine.”

You may say I’m a dreamer

But I’m not the only one

I hope someday you’ll join us

And the world will be as one.

The other day, I watched Michael Jackson’s video, “Heal the world.”

Make it a better place

For you and for me, and the entire human race

Create a world with no fear

Together we cry happy tears

See the nations turn their swords into plowshares

They all dreamt about the world where there is no more fight, no more war, no more violence, and no more hatred.

That was Isaiah’s dream. He expressed his dream through his prophecy.

…they shall beat their swords into ploughshares,

and their spears into pruning-hooks;

nation shall not lift up sword against nation,

neither shall they learn war any more. (Isaiah 2:4)

You will see the sculpture in front of the UN building in New York. (Russian Sculptor) It is ironic that it was a gift from the USSR in 1959.

Isaiah did not have this dream when his world was peaceful. His world was devastating. His people deserted God. Foreign invasion was imminent. He foresaw the terrible fate of his people. He saw the imminent threat of war. Many people would be killed.

Indeed what he foresaw happened. There were invasions and people were killed, temple destroyed, and people were taken captivity. They witnessed the horrible reality of war.

Isaiah saw all that. Isaiah also saw corruption in his people. Isaiah saw selfishness of people. They didn’t honour God; they just lived as they wanted. God did not like how they lived. God did not want their offerings. God would not answer their prayers, Isaiah said. He talked about all this in the chapter 1 of his book.

The ox knows its owner,

and the donkey its master’s crib;

but Israel does not know,

my people do not understand. (Isaiah 1:3)

What to me is the multitude of your sacrifices?

I have had enough of burnt-offerings of rams

and the fat of fed beasts;

I do not delight in the blood of bulls,

When you stretch out your hands,

I will hide my eyes from you;

even though you make many prayers,

He gave them a moral message.

learn to do good;

BUT MY FRIENDS, ISAIAH WAS A PROPHET NOT BECAUSE HE SAW THE MORAL CORRUPTION, OR FORESAW WHAT WOULD HAPPEN TO THEM, OR GAVE THEM A STRONG MORAL MESSAGE.

Isaiah was a prophet because he was able to dream dreams for the new world even in that desperate situation. He had a vision of what God would do. That’s what prophets do. They dream.

He had this dream and vision so vividly, he said like this.

The word that Isaiah son of Amoz saw concerning Judah and Jerusalem. (Isaiah 2:1)

He didn’t say I heard the word. He said I saw the word. His dreams and vision were so powerful that he used the visual language rather than the auditory language.

Even though he saw the corruption and terrible sins of people, Isaiah had this dream.

Even though he foresaw that the war was coming, he said this.

…they shall beat their swords into ploughshares,

and their spears into pruning-hooks;

nation shall not lift up sword against nation,

neither shall they learn war any more. (Isaiah 2:4)

It is important to live with dreams and visions. It is not just important. It is must. If we cannot dream dreams, we die. No dream, no life.

There is a Mexican artist. His name is Pedro Reyes. He did two projects: the first one – Palas for Pistolas. (Shovels for Guns) He made a series of TV ads and radio announcements to exchange firearms for vouchers and electric appliances. He received 1527 guns and he melted and remoulded into 1,527 gardening tools. The second project was Disarm. He received 6,700 confiscated guns and turned into musical instruments. And these instruments were used in a performance in 2012 at the Mexico City.

A Gathering of Dreams

Today is the first Sunday of Advent. We are celebrating the coming of Jesus. When Jesus comes again, he will bring a new world to us. We live with that dream. That is our vision.

Then I saw a new heaven and a new earth; for the first heaven and the first earth had passed away, and the sea was no more. (Revelation 21:1)

See, the home of God is among mortals.

He will dwell with them;

they will be his peoples,

and God himself will be with them; he will wipe every tear from their eyes.

Death will be no more;

mourning and crying and pain will be no more,

That was what the prophet Joel prophesied. A few weeks ago, we meditated on his name, right? The Lord is my God.

He said, when the Holy Spirit comes upon us, we will dream.

I will pour out my spirit on all flesh;

your sons and your daughters shall prophesy,

your old men shall dream dreams,

That was the beginning of the church. On the day of Pentecost, the Spirit came down upon them and Peter quoted this passage.

Do not lose your dreams. Your dream is your prayer.

I can do all things through him who strengthens me.

That was what St. Paul said.

Just the other day, at the World Cup opening ceremony, 정국 of BTS sang a song about the dreamer.

Look who we are, we are the dreamers

We make it happen, ’cause we believe it

Look who we are, we are the dreamers

We make it happen ’cause we can see it

Early Christians recited to each other: Maranatha. It means Come O Lord. That kept them strong.

That mourns in lonely exile here,

Until the Son of God appear.

Shall come to thee, O Israel.