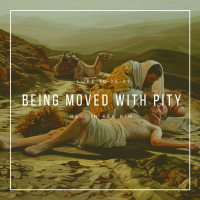 What the Samaritan did was not such a big deal. Jesus didn’t even use the word Good Samaritan. That’s what we came up with. The scripture doesn’t say Good Samaritan. Jesus never said Good Samaritan. The real point of this story is not about the greatness of this Samaritan. What he did was indeed noble. Helping out a person on the street was not in his schedule, but he took time to go down where this man was hurting and took him to the inn and took care of him, and even gave his money to the innkeeper to take care of him. That’s noble. How many people would do that? We are so busy and indifferent, we won’t usually care about the people around us who are hurting. We are too busy to do our own stuff and we are also very indifferent. We are living in a very indifferent kind of society.

Living downtown, I encounter people on the street all the time. Whenever I walk out, I see people. They are my neighbours. Whenever I stop the car, people always approach me for money. Most people are very thankful, but once I was coming to the early morning prayer at six o’clock in the morning. I stopped and then this guy was standing in front of me in front of my car and asked for money. So he came around. Usually, we don’t carry cash with us and I didn’t have much money. So whatever coins, probably more than a dollar, I collected everything and then I gave it to him and he threw back at me. Sometimes that happens, but I always feel bad that I can’t do much. All I could do is to give some change. So I try to make sure that I carry some change in my pocket whenever I go out. So living in downtown, they are always around you.

The man who was robbed, how thankful he must have been. When we suffered, there were people who helped us and we are very thankful for their help. Also, what the Samaritan did was very dangerous. The road from Jerusalem to Jericho was notorious for being dangerous. The road from Jerusalem to Jericho was known as Ascent of Adumim, Adumim meaning red, so Ascent of Blood or Ascent of Red because of the blood many robbers shed there. People who cannot pay the heavy Roman tax lived around there, hiding from Roman soldiers and robbing the travellers often. So that’s why that road was called Ascent of Blood. So when they went through that road, people hurried to get through this road as soon as possible, as fast as possible. They had no time to look around. They just got through it. Even if they saw somebody hurting, it was too dangerous for them to stop by. That’s why the priest and Levite just passed by. So this Samaritan, what he did was noble and dangerous, but that is not the main point of this story either.

Go Be A Neighbour

Let us just help each other because you are my friend. You are my neighbour. If neighbours are those around you who are like you, then what is so great about loving your neighbour? I don’t think Jesus was trying to say that loving your neighbour should be collective selfishness. Didn’t Jesus also say that “For if you love those who love you, what reward do you have? Do not even the tax collectors do the same? And if you greet only your brothers and sisters, what more are you doing than others? Do not even the Gentiles do the same?” That’s what Jesus said.

Our neighbours are not those whom we are comfortable with; those whom we want to be with. Those who are helpful to us or beneficial to us. Jesus told us to go out into the world and be neighbours to the people in this world. This is what he said, “Which of these three do you think was a neighbour to the man who fell into the hands of the robbers?” He said, “The one who showed him mercy.” Jesus said, “Go and do likewise.” Go be a neighbour like this person was a neighbour. That is our calling. That is what we need to do. It is our responsibility to be neighbours. Jews did not get along with Samaritans. They hated each other. They despised each other. As soon as they saw each other, they ran away. They didn’t even go through the area of Samaria because they did not like each other.

But, this Samaritan saved the Jew who was robbed. The scripture doesn’t say that he was a Jew, but 99% of the people who use that route from Jerusalem to Jericho were Jews so probably, he must have been a Jew. But, it doesn’t really matter whether he was a Jew or not. The people who listened to Jesus were Jewish people, they were all Jews and then Jesus was telling them the people that you despise so much, that person is your neighbour. That’s what Jesus was saying to the Jews. Jesus came to help humanity to overcome all our boundaries and become neighbours to each other. Jesus himself became our neighbour. To be our neighbour, he risked the danger and ultimately, he was crucified. That’s what Jesus did to be our neighbour.

The Hostility Taken Away

Jesus wanted to change people who used to live with hostility to become people now, to live with neighbourly love. From hostility to hospitality. That was the vision of Isaiah. He shall judge between the nations and he shall arbitrary for many people. They shall beat their swords into plowshares and their spears into pruning hooks. Nation shall not lift up sword against nation, neither shall they learn war anymore. That was the vision of Isaiah. No more fighting. We are all neighbours. And Saint Paul captured Jesus’ intention very well when he said, “For he is our peace. In his flesh, he has made both groups into one and has broken down the dividing wall.” That is hostility between us. He got rid of the hostility between us so that we become neighbours with each other, especially to those who are different from us. Especially those who are weak and vulnerable, especially those who are alienated and isolated from society, especially to those who are voiceless. Jesus took out that hostility so that we can be calm neighbours to each other. The only way to be a neighbour is to have mercy. To have mercy. Which of these three do you think was a neighbour to the man who fell into the hands of the robbers? He said, “The one who showed him mercy.” Mercy. This Samaritan, even though he was a Samaritan, he knew what mercy was all about.

To Have An Aching Heart

This is what it says, “But a Samaritan while traveling came near him; and when he saw him, he was moved with pity.” We don’t like the word pity because it’s kind of top-down kind of love, but that’s not what he meant. Here, the pity is an aching heart. An aching heart for the person who was suffering. You don’t see this aching heart anymore in this modern world. We are so different. We are so dull.

God’s Mercy For Us

This merciful heart is possible only when you experience the mercy from God. When you experienced the mercy from God, you know what merciful heart is all about. When God’s mercy is working within you, this merciful heart becomes formed within you. As Simon said eloquently in the beginning, “God’s mercy takes precedence over God’s wrath,” and that is our hope. When we commit sins, maybe God’s wrath may arise. But when we ask for forgiveness, when we repent our sins and ask for forgiveness, all of a sudden God’s mercy takes over and God’s wrath turns into God’s mercy. The greatest attribute of God is mercy. Let us be neighbours, not just to your friends, but look around. Not just in this sanctuary, but look around the society. Who are voiceless? Who are rejected? Who do you not like? Who are you not comfortable with? They are your neighbours. Not only those that you like so much. When you show that mercy to them, you are living out Jesus’ spirit.

Canada and the United States, we are neighbourly countries, but these days, sometimes we forget that we are neighbours. Whether you’re a politician or whoever who is turning hospitality into hostility, they do not uphold Jesus’ spirit. Let us be neighbours. That is our calling.