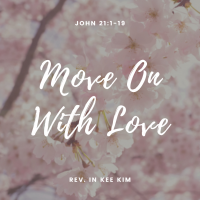 This question was a very difficult question to answer for Peter. A very uncomfortable question. He must have asked himself this question numerous times. Do I really love Jesus? If I do, how could I deny him, not just once but three times? What a coward that I am!

Peter was going through a painful time. Deep sorrow and deep regret! When Jesus said, everyone will become a deserter, Peter said I will never.

But Peter realized that these were just empty words that carried no weight. He realized he was too weak. He was filled with fear. That’s why he deserted Jesus.

So when Peter heard this question, “Do you love me?”, he automatically connected that with his denial.

BUT JESUS WAS DIFFERENT. Peter might have thought of it that way but Jesus’ thinking was different from Peter’s. His mind was not on Peter’s denial. Jesus didn’t even mention about Peter’s denial. Jesus was not concerned about what Peter did to him in the past but he cared about how Peter would take his future. Jesus’ mind was not focused on Peter’ past but on his future.

Every time Jesus asked Peter, “Do you love me?”, at the end, what did Jesus say? “Feed my lamb”, “Tend my sheep”, and “Feed my sheep.” Jesus was very focused not on what Peter did but on what Peter would do.

Jesus came to Peter not only to forgive what he did but also to restore his calling and prepare him for the future.

This whole scene was like the first time, when they met Jesus the first time. They fished all night but they caught nothing. And Jesus told them to cast the net to the right side of the boat and they caught so many fish.

Jesus knew that Peter was stuck in his past because of his guilt. Peter was disillusioned about himself. Jesus wanted to take Peter out of a snare of his past.

People who suffer from PTSD still live in the fear of their past. They can never let go of their past and move on. There are people who still live with guilt, anger, and disappointment because of what happened in the past. Their past holds them back. They can’t go forward.

This is what St. Paul said

Beloved, I do not consider that I have made it my own; but this one thing I do: forgetting what lies behind and straining forward to what lies ahead, I press on towards the goal for the prize of the heavenly call of God in Christ Jesus. (Philippians 3:13-14)

St. Paul also committed terrible sins against Jesus. He persecuted those who followed Jesus. Jesus appeared to Saul and said,

He wanted to destroy Jesus’ movement. He persecuted the church. But after meeting Christ, he realized how sinful he was. He regretted what he did.

For I am the least of the apostles, unfit to be called an apostle, because I persecuted the church of God. (1 Corinthians 15:9)

But he didn’t get stuck in the past. Forgetting what lied behind, he pressed on. He moved on forward.

Many of us think that Jesus asked him the same question three times because Peter denied Jesus three times. Maybe. Definitely, Peter might have heard it that way.

But I see another reason. Jesus had hard time to say what he had to say to Peter about his future. It’s all about Peter’s future, not his past. Jesus had to tell him how he would die. It was not easy for Jesus to tell him what the future held for him. So Jesus hesitated and made sure that Peter loved him enough to follow him. Then, finally after asking three times the same question, he said this.

Very truly, I tell you, when you were younger, you used to fasten your own belt and to go wherever you wished. But when you grow old, you will stretch out your hands, and someone else will fasten a belt around you and take you where you do not wish to go.’ (He said this to indicate the kind of death by which he would glorify God.) (John 21:18-19)

St. Paul understood this truth so well when he said,

So if anyone is in Christ, there is a new creation: everything old has passed away; see, everything has become new! (2 Corinthians 5:17)

With God, every day is a new creation. Yesterday is gone. Tomorrow is what we have to prepare for.

We have to learn to let go of our past. I see so many people live with their baggage. What they experienced in the past left such a deep scar that they have hard time to move on. They are stuck in the past.

I know it is hard to let go of our past. But I also know that we can. We can live a new life, not just as a victim of our past. We can always start a new life. Don’t look back. Look ahead.

With Jesus, our past will not have power over us.

What Peter needed was love. The reason Peter denied Jesus was because of his fear. It is love that drives out fear.

That was what John said.

Jesus wanted to make sure that Peter loved Jesus because only love would be able to help him when he would face his own horrible destiny. Jesus knew that only love would give him the strength to endure the difficulties.

Following Jesus is hard. Because it involves sacrifice. That’s why Jesus said, if you want to follow me, take up your own cross. Sacrifice is painful but love would make your sacrifice beautiful. Sacrifice becomes beautiful only in love. In love, sacrifice has a transforming power.

My friends, we are called to follow Jesus. In following Jesus, we may encounter a very difficult road. You may fail. You may fall. But leave all your failures, frustrations, and disappointments in God’s hand. And look forward. Have love for Jesus. That’s all you need. If you love Jesus, you will be able to handle any situation that comes to you.

Move on with love!