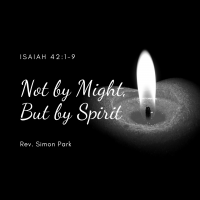 Today, as Steve prayed, we mourn for those who died in the airplane crash over Iran. As we read more, we realized that many of them were our neighbors. They’re our friends, coworkers, in this multicultural city and country that we call home. They were people just like us with their own personalities, hopes, and dreams. I was reading through the stories of those who died and I couldn’t help but be very moved. There were babies, children, teens, newlyweds, adults, students, and the whole spectrum of life. One teen, who was in high school, she loved to make YouTube videos. Another child, three years old, was looking forward to dressing up in an avocado costume because she loved avocados. Many were studying for a new life and career here in Canada. Dreams, hopes, laughter, joys, and love all snuffed out from the face of the earth in an instant. It’s all very tragic and senseless. Why did this happen? The Iranian government admitted yesterday that their military mistakenly shot down the airplane. And this mistake stemmed from fear. They were on heightened alert, afraid of how the Americans would respond after they sent missiles to American bases in Iraq, which itself was retaliation for the Americans killing one of their generals. Fear is what killed these innocent people.

In a world run by might, fear and hostility are the driving forces. The exertion of might breeds resentment and hostility. The weaker party, or the aggrieved party is always looking for ways to react against the powerful party. And they’re also fearful of how that party will respond. The powerful party knows this, and so, they too, fear. Their solution is to increase their might to prevent any reactions. So there’s an accumulation of might, fear, and hostility that brings about death, grief, and sadness. They have brought so much tragedy into our world. God must be so sad at how destructive we are to ourselves in this world. God’s heart must lament like a parent who sees their children ruining their lives. The story of the Bible is a story of a God who grieves at our destructive waves, who trembles in anger at the suffering of the innocent and powerless. It is a story of a God whose heart bleeds and mourns. It is the story of God who continually tries to lead us in a better way to live because there has to be a better way.

Justice of the Spirit

By the spirit of God, new life is created and restored. The prophet Ezekiel spoke these words of God, “A new heart I will give you, and a new spirit I will put within you; and I will remove from your body the heart of stone and give you a heart of flesh.” I will remove from your body the heart of stone and give you a heart of flesh. This is what happens when God puts a new spirit within us. The heart of stone is hard and dead. Nothing moves in this heart. Nothing goes in, nothing comes out. There is no feeling for life or for others. How does the heart get this way? I mean, I really don’t think we start out life this way. I look at my own kids, and their friends, and in them, I see vitality. I see life. I see excitement. Something happens though, that makes the heart become stone. As we go through life, our heart gets damaged and hurt. And the pain from that damage makes us fearful of feeling that again. So when this fear takes over, it chokes off the flow of life to our hearts, cuts off the circulation, and it turns to stone; becomes numb. When our hearts become stone, our brain takes over our thinking and our brains seek power to protect ourselves from danger, to protect ourselves from getting hurt again. Our brains trust might and power. A life without the spirit turns our hearts into stone. But the promise is that with the new spirit, God will give us a new heart of flesh. What beautiful imagery this is, a heart of flesh. This is a heart that is alive and pulses with life, and beats with feeling. Flesh is soft, so it can feel. The heart of flesh is free, free to feel. It feels joy, it feels happiness, but also feels pain, and the pain of others. The heart of flesh feels compassion, but because it’s soft, it’s also very vulnerable. Flesh can be ripped apart and damaged, and it’s very painful. So I realized this, the heart can only be free when it feels safe.

God’s Plan for Us

Today’s passage was spoken to those in the second and third generations of exile in Babylon. Their parents and grandparents had experienced the full might of Babylonian power as they were forcibly taken away, uprooted from their Homeland of Judah, and relocated far away in Babylon. Their parents spoke of weeping by the rivers of Babylon. So these children, and grandchildren grew up knowing the might of empire, and knew how small and powerless they were as a people. I mean, this generation carried on, like we all have to carry on with life. Some even became very successful in commerce, and in the Babylonian courts. But deep inside, as a people, they carried a lot of pain. In so many ways, they felt lost, not knowing really who they were or what to believe. The God who had sustained their ancestors seemed terribly absent, and they felt abandoned by that God. Their hearts were broken, but to survive in a world of might, they had to trust might, and their hearts had become stone.

It’s in this situation, that God spoke through Isaiah, to remind them that God was still the master of the universe, and that this same God had not abandoned them. “Thus says God, the Lord, who created the heavens and stretched them out, who spread out the earth and what comes from it, who gives breath to the people upon it and spirit to those who walk in it; I am the Lord, I have called you in righteousness, I have taken you by the hand and kept you.” I have called you. I have taken you. I have kept you. God had not abandoned them. God still had a plan for them. Not by might, but by Spirit. God had a plan for them to be a light to the nations through God’s way, the way of the Spirit through gentleness and humility. God knew what the world needed. So God wanted to heal their pain and restore their damaged hearts, remove their hearts of stone, and give them hearts of flesh so that they can go out and be a light to the nations. God was reminding them that in the midst of exile, in a world of might, God’s hand was covering them, and that they were still God’s chosen people to be that light to the nations.

I mean, you look around in the news today and the justice that people seek today is based on shutting down their opponents, and talking over each other. Or our hearts are just too numb to feel anything in this media saturated world. We see headlines, but then just move on to the next thing on our news feed and on with our lives. The kind of justice we need today is a Spirit filled justice that flows from the heart of flesh. A heart that has been damaged, yes, but that has been healed by the Spirit, and a heart that feels. All of you have been through your own experiences in life. You’ve had to make your way through a world of might. In the process, we’ve all received damage to our hearts. I mean, this damage distorted us in ways that we don’t usually realize. And this damage comes out in many weird ways, in our thoughts, in our words, and in our behaviors. I mean, you all see it, people around you sometimes. Why is that person saying that or behaving that way? We’re all distorted and damaged. We’re damaged goods, but somehow, through it all, God has kept us. As we sang in the new song that Jonathan introduced, God has kept us. The fact that we are here today means that God has taken us by the hand and called us here. God has called you. God has a plan for you.

Being a Light for those Around Us

We carry fear in our hearts, fearful of what people around us and the world will do to us. But when our eyes can see God’s faithful hand covering us, our hearts can start to feel safe, safe to allow the spirit into our lives. God has called us to put his spirit upon us. The Spirit heals us, restores us, and turns our hearts of stone into hearts of flesh. God has a plan for us to be a light to the nations, to be a light where we are.

I mean, many of you spend majority of your time at your workplace. Be a light to those around you at work, live by the way of the spirit, be gentle, understanding, compassionate. Don’t add to the toxic environment of talking behind people’s backs, or putting other people down, or complaining about this or that person. We have enough of that. And instead of just competing against one another, seek the well being of your coworkers and colleagues, connect with them as human beings. Yes, you all have jobs to do, and performing jobs at a high level is what helps us keep our jobs. And some of you might not even like your job, but you know what, I realized, it’s not usually the work itself, right, that makes a job miserable. It’s when you don’t feel any connection with the people around you. So be someone whom people can relate to as a human being. That’s really what it means for our theme of becoming together.

Living in the Spirit

That is what Jesus did throughout his whole life. At his baptism, today is the baptism of Jesus Sunday in the church calendar, he was filled with the spirit and then he lived the way of the Spirit. He lived with compassion. He healed the weak and vulnerable, he lifted up the spirits of the downtrodden, and he brought hope. There’s just too much hostility in the world today. Too much fear. We need more gentleness and compassion. We need more laughter, genuine laughter that comes from deep connection. All of this comes from life in the spirit. In this year, 2020, let us make this a year of living in the spirit. We live not by might, but by Spirit. Saint Paul said this, “If we live by the spirit, let us also be guided by the spirit.” May we all live and be guided by the spirit.