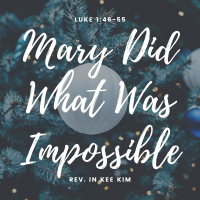 During this Advent season, I did Advent series on Luke’s understanding of Jesus’ birth. To Luke, Mary was the central figure in the story of Jesus’ birth. Mary was a very interesting person. She was born and grew up in a small town, called Nazareth. Nazareth was so small that it was not even mentioned in the Old Testament. Maybe a few hundred people at most. She was a peasant, poor and very low in her social status.

One day, she had this divine moment. An angel came to her. The Angel’s name was Gabriel. The meaning of angel is messenger. The angel gave her the message of God and the message was that she would give birth to a son.

Mary was only a teenager. We have HiC with us today. Can you imagine that you would receive this kind of message? How would you feel? Scared. Won’t you be? Of course you would be scared.

It is a good news to all of us. We sing, “Joy to the world”. But not to Mary. It wasn’t a simple good news to her. It was a devastating news. The implication was too horrible to even think about it. If the angel told her that you would have a new land or a new house, then it is obviously a good news. But to a teenage girl, you say you will be pregnant! How can it be a good news? In what way? She resisted too. I don’t know a man. How can I be pregnant?

But in the end, after hearing everything the angel said, what Mary said was totally shocking.

How could a young girl respond like that? Even Zechariah, the father of John the Baptist, could not do that. He was not only an adult but also a priest. He had a wife, Elizabeth, even though they were both old. When the angel told him that his wife would have a baby, he couldn’t believe. He had nothing to lose when Mary had everything to lose. There was no devastating consequence for Zechariah and Elizabeth. And they knew very well that their ancestors Abraham and Sarah were in the same situation as they were and they had a baby. But there was no incident of a virgin having a baby. Zechariah would not have been in scandal even if they had a baby. But still he could not accept the message of the same angel.

Yes, Mary was a young peasant girl, but she was not just a young girl. She was a poet. She was a theologian. She was a prophet. And she was a revolutionary.

Today’s reading is called Magnificat, Mary’s song. She prophesied what the child in her womb would do. She knew exactly what Jesus was about to do.

He has shown strength with his arm; he has scattered the proud in the thoughts of their hearts. He has brought down the powerful from their thrones, and lifted up the lowly; he has filled the hungry with good things, and sent the rich away empty. (Luke 1:51-53)

The Spirit of the Lord is upon me, because he has anointed me to bring good news to the poor. He has sent me to proclaim release to the captives and recovery of sight to the blind, to let the oppressed go free, to proclaim the year of the Lord’s favour. (Luke 4:18, 19)

Mary knew this. Her song was filled with quotations from the Old Testament. Psalms 22, 44, 103 and many others. There is an allusion to Samuel’s mother, Hannah’s song. In other words, Mary knew the Scripture inside out. She was not just an ordinary farm girl.

Her thinking was revolutionary. All the Israelites were under the oppression of the powerful people, like Roman emperor and Herod the king. They experienced the abuse daily from the powerful people, from the rich people, especially as a poor peasant. She dreamed that someday, God will lift up people like her. She gave this dream speech in her song. God will scatter the proud. God will bring down the powerful. God will send the rich away empty.

It was a revolutionary thinking. No wonder her song was banned being sung or read in India under British rule. Also, in the 1980’s, it was banned in Guatemala when the military took over the government and illegally arrested the farmers, tortured them, raped them, and killed them. She was not just an ordinary peasant girl. She was very devoted and her consciousness was fully awakened.

God did not randomly choose anybody. God chose a very specific person for Jesus’ birth. It was not just physical birth that was important. The whole process of accepting the message of God, giving birth, and raising Jesus – The whole process was very spiritual and very difficult. You know what Jesus’ birth brought turmoil in the world. You know how the Son of God would suffer and die. Mary saw all that. Mary was at the cross, seeing her son dying like that. Luke records that Mary was there when the early Christians gathered together and prayed after Jesus ascended into heaven. Without her faith, Mary could not have handled all that. This whole thing would not have been possible. God chose Mary specificially, even though it was a very unusual choice. God could have chosen a married woman who would have no problem giving birth and doing this discreetly. It would have been socially much more acceptable. But God didn’t. God chose Mary, a specific person, even though the choice was not easy to be carried out and very inconvenient.

Indeed, she fulfilled God’s purpose for her and for this world.

When she was struggling with this shocking news, the angel told her,

For nothing will be impossible with God. (Luke 1:37)

Yes, she did what was impossible.

When Mary had to deal with her impossible situation, she didn’t panic. She didn’t try to deal with the situation, thinking what would be the best for her. What did she do? She praised God. Her song was her coping mechanism. Try that in your life. When you deal with life situation which is beyond your power, praise God. You will experience the power of praise. That will help you focus on God, not on you and your problems. You will find the wisdom.

What Mary Taught Us

We thank Mary for showing us a good example of how to live. We thank Mary for carrying out what was impossible. We thank Mary for letting God break into our world to save us and liberate us. She was the door through which God broke into the world. She didn’t think about what others might think of her. She just focused on God, and God alone. The message Mary wanted to communicate was clear in her song. God will scatter the proud. God will bring down the powerful from their thrones, and lift up the lowly. God will fill the hungry with good things, and send the rich away empty. It seems impossible but God will do it through people like Mary. Let us all be people like Mary.

…the most passionate, the wildest, one might even say the most revolutionary hymn ever sung.