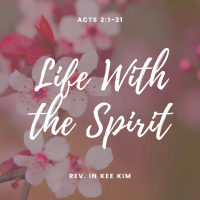 In those days Jesus came from Nazareth of Galilee and was baptized by John in the Jordan. And just as he was coming up out of the water, he saw the heavens torn apart and the Spirit descending like a dove on him. (Mark 1:9, 10)

Jesus did NOT carry out his ministry on his own, with his own strength. He always had a companion. His companion was the Holy Spirit. He was never alone. Even when he was alone in the mountain, praying, he was not alone. The Spirit was with him. He carried out everything with the help of the Holy Spirit. Jesus showed us how we should live. He showed us how to live with the Spirit. We are not alone. The Spirit is with us. The Spirit walks along with us. Even when we walk through the darkest time of our life, the Spirit is right there with us. Our life is journey with the Spirit.

After Jesus died, many people felt that it was all over. Jesus’ death killed the fire of the Christian movement. They thought, with Jesus, they could do anything. But now they lost that passion without Jesus. Many of them went back to their home. When you read the story of two disciples who met Jesus on the road to Emmaus, you can see that sentiment. They lost hope and they were going home.

Don’t we sometimes feel that? We don’t have any conviction. We don’t know where our life is going. But somehow, you still have a faint hope and keep praying? 120 people were like that.

Now when the Spirit came down upon them, they were excited. They could see the light at the end of the dark tunnel. They were very hopeful. They were all surprised. What they experienced was beyond what they expected. They were empowered to take this movement to the next level.

We could see this change clearly in Peter. Peter was timid. He was afraid. He denied Jesus three times. He was so weak. But now he was a changed man. He stood up and preached with confidence. When they heard Peter, they were cut to the heart and asked, “What should we do?”

When they had entered the city, they went to the room upstairs where they were staying, Peter, and John, and James, and Andrew, Philip and Thomas, Bartholomew and Matthew, James son of Alphaeus, and Simon the Zealot, and Judas son of James. All these were constantly devoting themselves to prayer, together with certain women, including Mary the mother of Jesus, as well as his brothers. (Acts 1:13, 14)

They were all filled with the Spirit. They were full of energy, conviction, and hope.

There was a true unity of humanity happened right there. People who were praying began to speak in other languages. There were people from all over the places and they started understanding in their own language.

Even though we use the same language, we don’t understand each other. But through the help of the Holy Spirit, they were able to understand each other even though they had a different language. Unity is possible when we can understand each other. Racial difference did not stand in the way for them to be united. Languages, races, nations, and cultures did not become the reasons for division and hatred. That is what this world needs right now. This compelling desire to be united is what the world leaders need to have. Instead of using our differences to discriminate each other, we should recognize and celebrate our differences to experience true unity. I told you before. Unity is possible only in diversity.

People who saw that, said this.

They meant they were drunk. They were not drunk but what they said was right. They were filled with new wine.

This year is our church’s 25th Anniversary. God has led us through the Spirit. The Spirit has guided us with wisdom we needed and empowered us with vision. We thank God for that.

Now it is the time to think of next 25 years. We need the Spirit. We cannot do it alone. The Spirit will guide us. I was impressed by the generosity of this congregation for the campaign we just had for the Rose of Sharon Nursing Home project. We raised more than $100,000 and surprisingly, more than $85,000 was raised in the ESM. It is not just the amount that is important. I see the spirit of sharing, the spirit of generosity.

One of the results of receiving the Holy Spirit for the early Christians was not only to gather together for learning from apostles and breaking bread together but also to share everything with each other.

All who believed were together and had all things in common; they would sell their possessions and goods and distribute the proceeds to all, as any had need. Day by day, as they spent much time together in the temple, they broke bread at home and ate their food with glad and generous hearts, praising God and having the goodwill of all the people. And day by day the Lord added to their number those who were being saved. (Acts 2:44-47)

This journey with the Spirit is not necessarily easy. Moltmann said in his book, “The Spirit of Life”, when freedom is close, the chains begin to hurt.

When our eyes are open through the Spirit, we see not only the vision to be free but we also see how enslaved we have been and how much we have been in bondage. It hurts us to see that. When freedom is close, the chains begin to hurt. The more we have vision to move forward, the more our conditions that don’t let us go, will hurt us and dissatisfy us.

We all want to grow out of our bondage. We groan. The whole creation groans.

We know that the whole creation has been groaning in labour pains until now; and not only the creation, but we ourselves, who have the first fruits of the Spirit, groan inwardly while we wait for adoption, the redemption of our bodies. For in hope we were saved. Now hope that is seen is not hope. For who hopes for what is seen? But if we hope for what we do not see, we wait for it with patience. (Romans 8:22-25)

That was the secret of how the early Christians persevered when they were persecuted. The Spirit was with them and interceded for them. And they knew that.