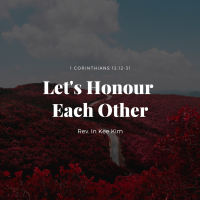 Dissension Between The Strong & Weak

Our last few weeks and including next week. I think the lectionary focuses on the Corinthian church but as you know, very well there were a lot of problems at Corinthian church. Their strong division among members within the Corinthian church. Corinth is like a Toronto Metropolitan City, very affluent kind of city. So because of that, there are a lot of other problems too. And also a lot of divisions. There is the first division you can see is that the division between the rich and the poor there’s a strong division between these two people. Two groups of people. The rich people were more flexible with time. They can finish the work anytime they want, but poor people, they cannot afford to do that. The masters said you work until searched and searched for an hour.

They have no choice but to work until late. So at that time, they’re communion. The communion is not like us. We are just taking a piece of bread and a line. But at that time, communion is part of the communal meal together. So whenever they gathered together and then they did communion and also meal together, but the people who came who are rich, they could come early and they eat up all the food and then some of them even got drunk. But by the time when the poor people came, there was no more food left. So, Paul was really advising them when you want to eat a lot, do it at home instead of doing it at church. So, when we read chapter 11, when you come together, it is not really to eat the Lord’s supper for when the time comes to eat.

Each of you go ahead with your own supper and one goes hungry and another becomes drunk. What do you not have homes to eat and drink in or do you show content for the Church of God and humiliate those who have nothing? Why should I say to you, should I commend you in this matter? I do not. Commend you. So Paul was quite upset, seeing the kind of prejudice or the division that was happening between rich and poor that was associated with economic division, but there was also political division. Some followed Paul and others followed Apollos and others, Cephas. Peter is the greatest disciple and they followed Peter (Cephas) and still others said that we are the pure ones. We are following Christ only, Christ alone. So there is a list of four divisions within the church.

There was a political division and as I mentioned to you last week, there was a spiritual division because of gifts. Our gifts are given to serve rather than to brag about, but they were bragging about their gifts. My gift is better than your gift and I’m more spiritual than you. I’m deeper than you. And all kinds of problems occur. And that there is a kind of judgmental attitude with the gifts. And so there was a spiritual division because of the gifts of the spirit. And then in addition to all that, there were moral problems, all kinds of moral problems. In this context, Saint Paul emphasized the unity of the church. The church has to be one. He said this, for in the one spirit, we are all baptized into one body, Jews or Greeks, slaves or free. And we are all made to drink of one spirit.

He was emphasizing on the unity of the church. You know, Saint Paul was a pharisee. Pharisee was cream of the crop of the Jewish system. They were the leaders. They were the elites politically, spiritually, and every way. They were the elites of the Jewish system. He was part of Pharisees. So Paul knew all about the Jewish system and he was immersed in the Jewish mentality. For Jewish people, the unity or the purity of a group comes from not embracing them, but by cutting them out. If there are any people who are impure, who are not, who don’t fit in the group, what they did was they cut off these people. And in that way, they maintain the unity and purity of the group. That’s why they did not allow the blind, the lame, the lepers, the sick, and the sinners to come into the temple.

They were will not able to come into the temple and worship God because they don’t fit in their definition of purity. And that’s how they maintain the unity and the purity of the group. Once Peter and John were going up to the temple and there was a beggar who was lame from birth, he asked for money and Peter said to him, I have no silver or gold, but what I have I give you in the name of Jesus Christ of Nazareth, stand up and walk. As soon as he was healed, he stood and began to walk. Do you know the first place he went to? Not his own, not his friends, but the temple because he always desired to worship God in the temple, but he was always outside of the temple. Every day he was sitting there not just for begging for money, but also he was there desiring to enter into the temple. When can I be fit to go into the temple and worship God? He was sitting everyday reminded that he was not welcome. He cannot go in there. So as soon as he was healed, when he was complete, when he was like anybody else, he went into the temple and worshiped God, X three eight jumping up he stood and began to walk and he entered the temple with them walking and leaping and praising God.

The Worth of Honour

When Saint Paul was very familiar with this mentality to keep the unity and purity cut out anybody who doesn’t belong to this category. So there were a lot of people who are cut off from that. But when you read Paul’s letter, you can see that Paul changed. Today, we read it. He’s a completely different person. This is what he said. On the contrary, the members of the body that seem to be weaker are indispensable. And those members of the body that we think less honourable, we clothe with greater honour and our less respectable members are treated with greater respect; whereas our more respectable members do not need this, but God is so arranged the body giving the greater honour to the inferior member that there may be no dissension within the body, but the members may have the same care for one another. That’s a very, very different from the Jewish mentality of keeping the unity very spiritual, very Jesus centred.

The world will not know this kind of thing. The worthiest power-oriented, the people who have power, they have the right to be in the center of it. People who don’t have the power they get excluded. But Paul’s idea here is a very different less honourable member will be treated with greater honour instead of alienating the weaker members and the inferior members by embracing them. He said to achieve the unity of the church, but God’s has so arranged the body giving the greater honour to the inferior member so that there may be no dissension within the body, but the members have the same care for one another. There was a way of Jesus’ ministry instead of alienating the people who are alienated from society, Jesus embraced them and spend time with them. Once a woman came to Jesus and she started washing Jesus’ feet and then people around her said, why does Jesus leave her alone? If he knew what kind of woman she was, he won’t let her dare touch him, but she just let it, let her touch him. Jesus said to Simon when I walked in, you didn’t even give me the water, but she washed my feet with tears. Jesus mentality was very different.

One Body with Many Members

One of the themes of our church is to be in solidarity with the weak and the vulnerable. That’s our theme. That’s what we are pursuing. That’s a value we have. Jesus was very strong against those who the power and oppress the weak with their power, but Jesus was very understanding with the weak and the vulnerable. We have the temptation to side with the powerful. Power attracts so many people. We like to be popular. We like to be honoured by people. We want to be influential in the midst of it all. If you forget those who are neglected, who are voiceless and who are rejected and alienated, we lose Jesus’s perspective. Jesus said this in his parable, then he will say to those at his left hand you are cursed, depart from me into the eternal fire, prepared for the devil and his angels for hours hungry and you gave me no food.

I was thirsty and you gave nothing to drink. I was a stranger and you did not welcome me. Naked and you did not give me anything sick and in prison and you didn’t have to visit me. Then they also will answer, Lord, when was it that we saw you hungry or thirsty or a stranger or naked or sick or in prison and did not take care of you? Then he’ll answer them. Truly, I tell you, just as you did not do it to one of the least of these, you did not do it to me. And this will go away into eternal punishment, but the righteous into eternal life. We need to be always mindful of those who are weak and vulnerable around us. That is what makes a community a beautiful community. We have encountered sad news about Sherry tomorrow is her funeral. I still remember her.

Every time when she comes to church from the parking lot to the Bible study, it takes 10 minutes minimum. Somebody goes there to pick her up, 10 minutes, drop her off, 10 minutes. She comes here 10 minutes to come in, 10 minutes to go out. She came almost every Wednesday to the Bible study. She wasn’t able to speak at the Bible study. But these friends, At least they want her to hear the good news, hear the message, even though she cannot express herself they want her to be comforted by the message, the weaker body you guys took good care of her. And I thank you for that. That is what church is. Church is not a place where the healthy, strong, popular, only those people gather together. Church is a place. Where people who don’t fit, who are struggling, who are poor, who have lots of problems. They are welcome in the church and we should take care of them with greater honour and respect and love. That’s how church is different from any other organization in the world. That’s what church is.