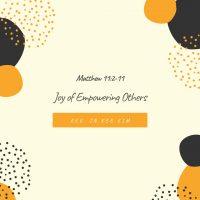 Today’s the third, Sunday of advent. On the third Sunday of advent, the theme is joy. Where do we get joy? Where do we get joy of life? When do we get joyful? When I watch sports games, I can see pure joy from the teams. The winning team’s faces, there’s just pure joy. When the Blue Jays won, I saw it. I still remember 1993. You probably some of you weren’t born then, in 1993. In the ninth inning, we were losing six to five because we lost five points in one inning and we were at two ball, two strike. Joe Carter came out and then he hit a three run home run and then finally we won that game. I still remember Joe Carter, leaping for joy that he was coming home. I could see pure joy on their faces. Victory, that gives us joy. Victory.

Expectations of the Messiah

The Israelites were thinking about victory as they were waiting for the Messiah. What kind of victory? Victory over Roman soldiers. Victory over the Romans who had colonized them. Even though they didn’t have military power they believed that if the Messiah comes, then this Messiah will bring them victory over the Romans. They didn’t have military. They didn’t have fiscal power, but if the Messiah comes and he will give us victory. That was what they wanted from Jesus. Actually, they wanted Jesus’ power to have victory over the Romans. That was their expectation of the Messiah because when they saw Jesus, they saw that power. Raw power. When he performed miracles, they could feel the power. When Jesus spoke, the experienced the charisma of the Word so they were surprised. What sort of teaching is this? I never heard of this kind of teaching. They felt the power of the word.

They saw Moses in Jesus. “If Moses was an old man, 80 years old, with one staff, could defeat the Egyptian army, why can’t Jesus defeat the roman army?” they thought. Jesus did not deliver the victory they wanted. Rather, he was defeated. He was crucified by the cross. And all that expectation of victory was totally destroyed on A.D. 70. When the Romans finally came into Israel and trampled and it killed all of them. The temple was destroyed, everything that they had was destroyed on A.D. 70. They didn’t experience victory with Jesus. So Christians had to rethink about the power of the Messiah. What is this power, then, of this Messiah, Jesus? If he could not deliver this victory to us over The Romans, what kind of power is this? They had to redefine the power of Jesus, the power of the Messiah from A.D. 70. As you look at Jesus’ life from beginning his power was not about conquering others. He was not about victory. Right from the beginning, Jesus never preached about a victory or the power of victory.

Jesus’ power was always about empowering the powerless. That was Jesus’ power, empowering the powerless. It was not power of defeating the Romans. That was the main reason why Judas left Jesus. That’s why he betrayed Jesus. Because he, he kind of felt that this guy will not bring us the victory. So he betrayed Jesus. Not only Judas, but all the disciples had that kind of understanding about the power of the Messiah. That’s why John and James said, when you’re going to enter into Jerusalem, can we sit on your right hand and on your left hand? Because they wanted a powerful position. All of the 10 disciples were angry and indignant saying, ‘I was going to ask that first and you guys asked for it’. So they all thought about this power of victory.

John the Baptist might have had the same thought because there was a Jewish expectation of the Messiah. That’s why he sent his disciples with this question: ‘are you the one who’s to come? Or are we to wait for another?’. John the Baptist was the one who baptized Jesus and he saw heaven open and he heard a voice from heaven. He also said, he was unworthy to untie the thong of Jesus’ sandal. Now, he was wondering whether Jesus was indeed the Messiah that he was waiting for. John’s question was not the question of curiosity, there was a sense of doubt, whether Jesus was truly the Messiah because he was so different from what they had expected. They all wanted the power to win.

That is the power, they wanted. The Power to survive, the power to be better than others, the power to have more. We what this kind of power. This power, it gives us what we want. When we get what we want we are joyful and feel, content. When we, realize that we don’t have that power, we feel down and depressed. Jesus answered John’s question in this way. When John asked ‘Are you the one?’ Jesus answered with this, “the blind receive their sight, the lame walk, the lepers are cleansed, the deaf hear, the dead are raised, and the poor have good news brought to them“. Listen very carefully. When power hungry people read this, the first thing they will see is a miracle. Oh, the blind will receive their sight and the lame will walk! Wow! What miraculous power! The power hungry, they will only see that. The people who know the power of Jesus will see something different. Jesus came to empower the powerless. They’ll see totally different things.

The lame, the blind, the deaf, the poor, they were all powerless people. Do you remember John and Peter? They were walking at the entrance of the temple. There was a crippled man. He couldn’t stand and he asked for money and Peter said, ‘I don’t have money, but in the name of Jesus rise and walk’. As soon as he was able to rise and walk, he entered into the temple. Why? Because everyday he was just sitting there go, he could not go into that temple because the lame cannot enter into the temple. The deaf, cannot enter the temple, the blind cannot enter the temple and they wanted to go into the temple so much to be with God. But they could not. So as soon as they were healed, they went into the temple. The first thing they did was to worship God. These are the powerless people, alienated people from society and Jesus the Messiah came and restored them. Empowered the powerless. That was Jesus’s power.

True Joy Comes From Empowering Others

So whenever Jesus performed miracles, he said, don’t talk to anyone because he was scared that these people would misunderstand the message. They will only see the miracle, rather than what Jesus was truly trying to say. The true joy of life is possible not when you have everything, not when you achieve the highest goal, not when you win every game you play, but it is possible when you, especially powerless people, when you empower the people around you. When you see that people receive new power, new hope, and now life, through you, when you see that, then you can truly have joy of life.

Self-centered joy will not last too long, but when you actually empower people around you, especially weak people, vulnerable people, that joy is everlasting joy. That is the joy of God. You know the story of the prodigal son. The son asked for his inheritance, the money. In other words, he said to his father, ‘I’ll consider you dead. So give me the portion that belongs to me’. And he went out and spent all of it, wasted it. He came back. He was a bad son. The father didn’t say, ‘see what did I tell you? You should’ve listened to me’. He didn’t try to prove himself. Right?

The father, did not say anything. He put a ring and a purple robe on his son. He empowered this powerless son and he was so joyful that he threw a party. That is the joy of God. There are parents who take away power from their children and continuously nag them. All the time saying, ‘You didn’t do this right, you didn’t do that right, you aren’t that great’. It constantly ridicules the kid, and by that they take away their power, what little power they have. There are parents who empower their children. They encourage them, they give them hope, and they say, ‘yes, you can do it. I believe in you!’ There are parents who empower their own children. Jesus expresses God’s heart in this way. “What do you think? If a shepherd has a hundred sheep, and one of them has gone astray, does he not leave the ninety-nine on the mountains and go in search of the one that went astray? And if he finds it, truly I tell you, he rejoices over it more than over the ninety-nine that never went astray. So it is not the will of your Father in heaven that one of these little ones should be lost”. Jesus’s ministry was the ministry of empowering the powerless. That was Jesus’s joy.

This is the spirit of Christmas. Christmas is not about you. Christmas is not just about you being happy. Christmas is a season where you look around. Are, there are people who need my encouragement? Are there people who we need to take care of? Are there people who are sad, are there people who are lonely? Are there people who are struggling with their lives? Reach out to those who are broken and empowered them. That is the Christmas spirit. And that should be our attitude every day. Instead of focusing on ourselves, let us build others up, and let us enjoy that. Building up other people and the joy that you get from it, that’s the best joy you can ever ask for. When you can do that, your life will come alive. Your joy will be restored. You know why you’re not so happy? You know why you’re not that joyful? Because they’re so self-centered. We can never be happy, we can never be joyful when we are so self-centered. When you make a way for others, when you empower others then you will find that this is what a joyful life is all about. That’s how Jesus lived. And that’s why Paul said, “rejoice always”. Rejoice not only when things are good, but even when things are bad. You can always empower the others. When you ingrain that lifestyle into you, did you will find true joy and life is fun in that way. Merry Christmas, and have joy all the time.