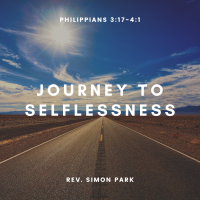 We know that leadership affects other people. A bad leader can cause a lot of harm and suffering. A good leader, however, can inspire people and rally people in unity and purpose. Because of this, we consider leadership to be very important.

St. Paul brought people together in the communities he founded. He founded the community at Philippi. The Philippians held a very special place in Paul’s heart. Together, they experienced the powerful presence of God. They worked and toiled together to build the community. They were his most loyal community. In some other communities, people turned away from him and started following other leaders. But not the Philippians: they were his “ride or die” people. When he was in trouble, they were the only ones to raise funds and send money to him. There was a deep bond of love for one another.

But once St. Paul left them, they started to have issues. People started looking after their own interests instead of the interests of others. People started competing with one another. Conflict and division ensued. While Paul was there, they had experienced togetherness and looking after the interests of others. After he left, however, personal agendas and interests took over. What Paul was able to do for them, bringing unity and purpose, they were not able to do for themselves.

This is common among groups after an inspiring leader leaves. By the force of their personality, conviction and charisma, a strong leader gets people to believe in a common purpose. They lay aside their own agendas and interests for that common purpose, and this creates strong bonds and feelings of togetherness. The leader is the glue that holds this group together. But once that leader leaves, the strength of their personality is gone. The sense of common purpose they instilled often subsides. Much of the unity is often the effect of a leader’s abilities and not the maturity of the whole people.

St. Paul says this to the Philippians:

Therefore, my beloved, just as you have always obeyed me, not only in my presence, but much more now in my absence, work out your own salvation with fear and trembling… (Philippians 2:12)

Paul is telling them not to rely on him to keep the group together. Each of them need to work on becoming mature. They need to be able to hold themselves together without his personal presence. They need to live out what he taught them without him having to be there.

The Nature of Immaturity

The problem is not so much the lack of great inspiring leaders. The problem is the lack of maturity among ordinary people. It is nice to have great leaders who can bring people together. We celebrate such people and admire them. But often we place too much burden on them. Great leaders become a crutch for people. It becomes an excuse to not do our own work, and rely on the leaders to do the heavy lifting for us. It becomes an excuse to remain stuck in our immaturity.

True maturity comes when we remove ourselves from the center. This is true spirituality and spiritual maturity.

Paul says this to the Philippians:

Let the same mind be in you that was in Christ Jesus, who, though he was in the form of God, did not regard equality with God as something to be exploited, but emptied himself, taking the form of a slave, being born in human likeness. And being found in human form, he humbled himself and became obedient to the point of death – even death on a cross. (Philippians 3:5-8)

We see a downward movement of continual self-emptying. This passage captures the trajectory of Jesus’ life. His life was a journey of emptying himself, all the way down to death on a cross.

Jesus removed himself from the center, but what replaced it was not empty space. What filled his center was God’s love and will. His bodily and material needs, his safety and security, his own dignity and sense of honour – did not take center stage. The will of God did. At the Garden of Gethsemane, his self wanted to preserve itself. He struggled mightily, asking God that the cup might be taken away from him. But his final words were: not my will, but yours.

God’s will was the center of his life. His whole life reflected this. Loving the unloveable. Healing the undesirable. Honouring the unhonourable. Respecting the unrespectable. He expanded the boundaries of who was eligible to experience the mercy and grace of God.

The ultimate expression of God’s will was at the cross. He was nailed to the cross by his enemies. But hanging on the cross, humiliated and ridiculed by his enemies, this is what Jesus said:

Jesus’ final expression of God’s will was to forgive his enemies. This is the deepest meaning of the cross.

Paul describes enemies of the cross in today’s passage:

Their end is destruction; their god is the belly; and their glory is in their shame; their minds are set on earthly things. (Philippians 3:19)

These are people who keep their self at the center. Their god is the belly. In other words, taking care of my stomach, my needs is their god. Their minds are set on the earthly things of taking care of myself first. We are all enemies of the cross. We crucify God’s will and turn away from the cross. Yet we are the ones that Jesus asks God to forgive.

Our self-centeredness separates us from the will of God. It suffocates, it crucifies, the will of God from our lives. Jesus removed himself from the center, and let God’s will become the center. My friends this is the very heart of the Christian journey. To be a follower of Jesus is to be shaped by Jesus to be like Jesus. To walk the path that he walked of removing himself from the center and being filled with God’s will.  To have our life take that shape.

This is the journey that St. Paul was on. He describes it like this:

I want to know Christ and the power of his resurrection and the sharing of his sufferings by becoming like him in his death, if somehow I may attain the resurrection from the dead. Not that I have already obtained this or have already reached the goal; but I press on to make it my own, because Christ Jesus has made me his own. (Philippians 3:10-13)

We can never fully be like Christ in emptying ourselves of our self-centeredness, but like St. Paul, we are called to always press on to make that our own. He is saying “join me!” on that journey.

Brothers and sisters, join in imitating me, and observe those who live according to the example you have in us. (Philippians 3:17)

He wasn’t saying this to boast, or to say that he had it all together. He was talking about his example of pressing on with everything he had to have our lives take on the shape of Christ.

He says that our citizenship is in heaven. What does it mean to be a citizen of a particular place? When immigrants first arrive in a new country, they feel very displaced. Everything is foreign, everything is unfamiliar. They miss their old home.  There are so many adjustments to make. But over time, they become accustomed to their new home. They feel more a part of their adopted country. When they go back to their old country later on, they feel out of place and like they don’t really belong there any more. They may enjoy visiting their old country, but they no longer feel homesick for it or wish to live there. They agree more with the norms, customs and standards of their adopted country.

Citizenship in heaven means becoming accustomed to the ways of the Lord of that realm, the ways of Jesus Christ. Citizens of heaven are all former enemies of the cross – that is, those who were driven by the self at the center. But they now strive to have God’s will at the center. Their lives take on the shape of Christ. They are able to live their lives more for others. The longer we are citizens of heaven, the more we take on the norms of Christ and his self-emptying. The self-centered ways of the world become more foreign to us. We live in the world, but we feel like strangers and aliens in it. Less and less the ways of the world seem to make sense to us. But we live out God’s will in loving this world, caring for it, and giving of ourselves for it, even those who turn against us and become our enemies.

Citizenship in a new place requires immersion in it. As citizens of heaven, we must be immersed in our Lord Jesus Christ. We must walk daily with him. Meditate on his words and his life. Seek God’s Spirit to shape us in the way of Jesus. Just like citizenship in a new country, this process takes time. Changes are hard to detect or notice. But slowly but surely, God changes and transforms us with his power.

We are citizens of heaven, but we live in this world. Living in this world brings many challenges. People get hurt and suffer at the hands of others. But what can happen for those who suffer difficulty is that they can become trapped by their victimization. This victimization itself can become a self-centered narcissism. Every experience gets experienced through that filter. Some people say that Putin harbours grievance and resentment toward the West for Russia’s humiliation after the collapse of the Soviet Union. Whatever it may be, one man’s narcissistic perspective and agenda has unleashed untold suffering and chaos. 2.5 million lives upended, uprooted and traumatized, all because of one man!

Every human being has a responsibility to be mature. The only way for this world to truly be saved is for people to stop placing their own interests at the center, and put others before themselves. To see things from others’ point of view and not only my own. For any issue: climate change, racism, unfairness… But there is no way for us to achieve this on our own. Our self-centeredness is way too entrenched in us, like the air we breathe. We need the same Spirit that Jesus breathed onto his disciples.

While Jesus was alive, they were immature and self-centered. But after Jesus departed, he sent the gift of the Holy Spirit. The Spirit transformed them and changed them. No longer were they driven by their self-interest. No longer did fear have a grip over them. They were filled with the Spirit at their center. They saw life in a new way from God’s perspective. The Spirit led them to expand God’s will beyond what Jesus did. They gave their lives for God’s will.

God’s Spirit, the same Spirit that filled Jesus and the disciples, is given to us. That Spirit gives us the power to be freed from our self-centeredness to live out God’s will.

If any want to become my followers, let them deny themselves and take up their cross and follow me. For those who want to save their life will lose it, and those who lose their life for my sake will find it. (Matthew 16:24)

This is our identifying mark as citizens of heaven. We are citizens of the way of Jesus. It’s always inspiring to see citizenship ceremonies. Let us celebrate our citizenship, and walk the path of our Lord.