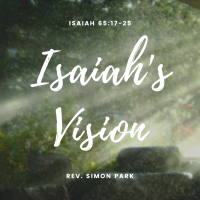 Isaiah’s vision is very beautiful. Who doesn’t want a world like the one Isaiah describes? But it can sound too good to be true. I struggled so much with this sermon. For over a month I read so many things and took so many notes. But nothing stuck.

I realized that it’s because I don’t think anyone really believes in such a possible world any more. There is too much that leaves people disillusioned, cynical and jaded. When the pandemic first hit, there was so much hope that people might change, that our society and world might change. We were all in it together. We wanted to build back better.

But what we see now is so different. In fact, it’s almost the complete opposite of Isaiah’s vision. The world we see is not a joy, its people are not a delight. There is weeping in so many places. Cries of distress are around us. There are many places where infants live but a few days. So many people do not live to old age. Many people build houses for others to inhabit. Plant only for another to eat. Many young people nowadays don’t want to bring children into this world. The lions of this world do not lie with lambs but rather devour them.

How can we believe that the kind of world Isaiah describes is possible? How can I speak about it without seeming out of touch with reality?

I started to reflect on the purpose of dreams and visions. Why do people have dreams and visions? What purpose do they fulfill? The closest modern example I could think of was Martin Luther King Jr’s “I Have a Dream” speech. I reflected on what that speech did. The speech evoked people’s desire for a better world.

And so it dawned on me: the reason I couldn’t come up with any meaningful message from this vision is because I feel a crisis of desire. Everywhere I look, people’s flickers of hope for change always seem to get snuffed out. Optimism turns into jaded cynicism. I’ve met so many people who were once on fire for their particular passion. Years later, when I look in their eyes, that fire has been snuffed out. Somehow, this world snuffs out desire and hope for change. It’s gotten to the point where I feel like our young people don’t even have the chance to desire change in the world. Even before they can form any desire, it’s taken away from them. It’s like the parable of the sower, where some seed fell on the path and the birds came and ate them up before they could even go into the ground.

John the Baptist’s role was to prepare the way for Jesus. His role was prophesied by Isaiah:

A voice cries out:

“In the wilderness prepare the way of the Lord;

make straight in the desert a highway for our God.” (Isaiah 40:3)

His main message was repentance. His ministry was baptism for the repentance for the forgiveness of sins. What were they repenting from? What sins were they turning away from?

Their sins were not caring. Turning a blind eye to those in need around them. Being numb to the needs of others.

Repentance is not becoming some morally upright person. Or a holy person. Repentance is caring. Caring prepares us for God in our lives.

And that makes so much sense to me. Caring awakens our hearts. Caring makes you notice people around you. In our Session meetings, we always talk about pastoral care, and how to care for our members. Each of you should know that our Elders are always praying for you! We are cultivating a leadership of care. That is why we have our monthly pastoral care groups. So we can learn to care more for one another. Caring prepares us to follow Jesus.

The Essence of Jesus

To be a Christian shaped by Christ is to care. You can say all the right things, display the greatest piety, know all the doctrines about Christ and faith. But if you don’t care about people, you are not one who is shaped by Christ. I’m sorry to say that, but that’s really what it comes down to.

You know what else it means to be in a relationship with Jesus and follow him? It means to learn how to suffer like he did.

If anyone want to become my followers, let them deny themselves and take up their cross and follow me. (Mark 8:34)

Once St. Paul met Christ, his greatest desire was to be close to Christ and be like him, even in his suffering.

I want to know Christ and the power of his resurrection and the sharing of his sufferings by becoming like him in his death. (Philippians 3:10)

Suffering is not just a bad event or incident. It is not merely bad circumstances in life. The suffering Jesus went through was much deeper than that. The suffering he experienced was a heavy pain of seeing people not understand what he was trying to do. Not only that, they were so opposed to everything good he was trying to do. He saw that their blindness and numbness to his teaching and message was just hurting them. He carried this weight of their ignorance.

Jerusalem, Jerusalem, the city that kills the prophets and stones those who are sent to it! How often have I desired to gather your children together as a hen gathers her brood under her wings, and you were not willing! (Matthew 23:37)

Many parents can understand this kind of suffering. The greatest suffering parents experience is when they see their children suffer. Nothing makes their hearts ache. They would rather take that suffering upon themselves than see their children suffer. They suffer because of their love. It is a suffering love. Love that suffers is the greatest and highest love. That is why many second gens get so emotional when we think of our parents. They loved us in such a sacrificial way.

The crisis of our modern, affluent world is the crisis of care. Somehow, in the midst of our busy everyday lives, in the midst of our work and pleasure, we have grown so numb. We are so numb that we don’t even notice people! Many young people don’t even notice or look up if you’re in the same room as them. It sometimes feels as if you don’t exist. But it’s not only them. We all live this way. At the Hi-C retreat, Pastor Dave did simple concrete exercises like looking the other person in the eye and acknowledging their presence. We are trying to teach basic skills as a human being.

Suffering love desires change. Suffering love wants to make things better. Isaiah had this deep desire for change. He was broken by all the injustice and suffering he saw around him.

But not only that. He had faith. He had faith that God would make all things right. He wasn’t blind to the situation around him, but he believed in the greater power of God that was at work. Somehow he saw that God was at work in the midst of a bleak situation.

See, the Lord God comes with might, and his arm rules for him; his reward is with him, and his recompense before him. (Isaiah 40:10)

He saw the mighty powers of his day. The Jews had no choice. They lived under the power and decisions of the mighty powers. But still he believed that God would outlast any of them. And he was right. Empires and people that seemed so powerful in their time have all faded. But the word of God has remained.

The grass withers, the flower fades; but the word of our God will stand forever. (Isaiah 40:7)

He was convinced that God would prevail.

For as the rain and the snow come down from heaven, and do not return there until they have watered the earth, making it bring forth and sprout, giving seed to the sower and bread to the eater, so shall my word be that goes out from my mouth; it shall not return to me empty, but it shall accomplish that which I purpose, and succeed in the thing for which I sent it. (Isaiah 55:10-13)

Isaiah was right. We are still here, thousands of years later, proclaiming the power of God’s Word to change hearts and change this world. This faith leads us to hinge everything on the Word of God. I believe that a small group of people studying the Word every week is ultimately more powerful than all the plans crafted by powerful and people.

Isaiah had faith in God, and he had a suffering love for his people. Faith and love opened his heart for God’s vision. It was a vision rooted in conviction that God was doing something new.

Faith and love produce hope. And hope gives us a powerful vision for life. That is what gave Isaiah this vision.

God is always doing something new.

Do not remember the former things, or consider the things of old. I am about to do a new thing; now it springs forth, do you not perceive it? (Isaiah 43:18-19)

We don’t need to be overwhelmed by the problems of the world. God is at work and doing something new. All we need to do is repent. Repent from our indifference, our self-centredness, our numbness. Ask God to break open your heart to care. Have faith in God. God will give you a beautiful vision for your life and this world.