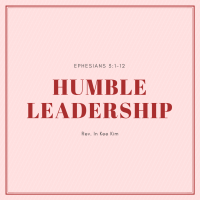 St Paul said he had become a servant according to the gift of God’s grace. He said he was the very least of all the saints, the saints meaning Christians. He’s saying that he is the least of all Christians. He wasn’t not saying this just out of courtesy or modesty and it’s not something that he just said when he wrote a letter, he meant it. He meant it because he had the ugly past, the past of persecuting Christians, imprisoning them and killing them. He was right there when Stephen was stoned to death, probably, most likely he was in charge of the whole thing. He was very devoted to God, but at the same time, he was a very violent man. He had very strong self-will. He did not even know that he was going against God. Paul lives all his life with this burden of his violent past. He was aware of his own sins. That’s why he was saying that “I’m the least of all Christians”, but Jesus appeared to him and forgave him and transformed him, and not only that, he made him his servant. He made him do his work. Paul didn’t do that by his own choice. It was God who did it. It’s not what Paul initiated. He didn’t even know, but God somehow changed him, forgave him, and used him as his servant. Paul was a very capable man, well educated, hardworking, smart, intelligent man, but he was also a man of very strong opinions, but this time he experienced that there was a power that did not belong to him. What happened to him was not something that he did with his own power. He realized that there was a power, some power that he didn’t have inside of him, but that power changed him. That was the first time he experienced the power outside of himself.

This power totally changed him. This power totally opened his eyes and showed him how wrong he was and how rich God’s abundance was. The first time he experienced that his life was led by the power that was greater than his strong will. That made Paul humble, that made Paul humble, recognizing that there is a power outside of himself and that power was leading him. Recognizing that, he became humble. Christian leadership is built on humility. This kind of humility is not from yourself, not from your power, not from your intelligence. Christian leadership is built upon this humility. Christian leaders are not those who exercise their own power to dictate people what to do, but those who experience this wonderful power of God and share that with people in humility. Christian leaders are those who experience the power of God’s grace, and this amazing grace makes them humble. God uses humble people. God cannot use arrogant people. God always uses humble people. God pours out his abundance upon humble people and lets them see God’s wonderful wisdom. Humble people are the people who believe that there is a power more powerful than themselves working in their lives.

My friends to live humility is not to live with a pitiful feeling. It’s not to live with an inferiority complex. That’s not what it means to be humble. Humble people always live with this excitement of experiencing God’s wonderful ways of helping their lives. God always shows them new understanding, new secrets, and a new way of living and seeing their lives. Humble people always experience the power that comes from above, beyond themselves. People who are not humble have all of these things are hidden to them. They’re just on their own. People who think their life depends on them and only on their ability have no choice but to live with worries and anxiety. What if I cannot do it? So there is no choice but to have these worries and anxieties. When your life depends on you and you are alone, you have to live. You have no choice but to live with the worries and anxiety and you become totally self-obsessed with yourself, but humble people believe that their life depends on God, not on themselves. So they don’t need to focus so much on themselves. Even if I cannot do it, there is a power that helps me do it. So they don’t have to focus so much on themselves. So they don’t need to worry so much about themselves. They realize that there is a greater power than themselves that carries their lives. They know this hidden power and they trust God in every circumstance. Even when they feel totally powerless and helpless they don’t fear because they know that there is a power that comes from somewhere other than themselves. These humble people live with their faith, not with their ability, and their confidence comes from their faith. St Paul knew this very well. That’s why he said in today’s scripture, we have access to God in boldness and confidence through faith in him. Can you? He had confidence through his faith, and I realized in humility there is a power that no one can destroy. That is the power of humility. No one can destroy the humble people. Nothing in the world can destroy the humble people. Why? Even if they themselves get struck down they come back up, because they are more than themselves. Even if their selves are attacked because they don’t depend on their self, even if they destroy their self, they cannot be destroyed. It is tremendous power in humility and St Paul experienced or understood that secret wisdom of life. This is what he said, but we have this treasure in clay jars so that it may be made clear that this extraordinary power belongs to God and does not come from us. We are afflicted in every way, but not crushed. Perplexed, but not driven to despair. Persecuted, but not forsaken. Struck down, but not destroyed. What power. This is a confession of a humble person who lived his life through faith in God, not in himself.  This is a confession of a person who is more than himself. Now I see why God uses humble people. The only kind of power that can stand against the power of the world is the power that comes from humility, because of the power of the work can never destroy them. Humble people have never given in, no matter how hard their circumstances press against them they never give in. Humble people have no false self that is created by pride. That is what humility is. Humble people have no false self that is created by pride. Jesus said if you want to follow me, deny yourself. In other words, destroy your false self. That was created by pride. First, destroy that. Throw that away. Then you follow me. That’s what it means to deny yourself.

Get rid of your false self. Sometimes in the morning, you wake up and you get so anxious. Why? Because you hold onto your false self. That doesn’t mean that you’re empty with no self. It means that you’re empty of your false self but full of your real self. Humble people don’t spend their energy and time to build themselves with this false identity. Within them, there are very much alive with their new selves filled with life and vitality. The false self is only to hide your shame, your pity, and your imperfection. You have this false self to hide them. It is simply the clothes that you wear, but you are not your clothes. St Paul took off those clothes to find who he really was. St Paul found his “I” which can be found only by God’s grace. That’s why he said, I am who I am. By God’s grace, no one can stop that power humility is power, and no one can stop that power. It is a power that doesn’t look like power because it doesn’t show off. It doesn’t look like power. It doesn’t look like victory, but it is the power that rises up even in the midst of ashes of life’s defeat. It is like a shoot that comes off from the surface of the stump, like Isaiah’s vision.

It’s like a cross. The cross looks like the total defeat, but we proclaim that cross is the victory. Think about it. That’s why Jesus said, take up your cross and follow me. Yourself is that everything, there is a greater power that holds you than your own self. Have faith in God. God will hold you, so humble people are strong. Let us practice our humility this year. Real humility and let us see how God works through your humility. Experience God’s power this year. You’ll be able to see what you didn’t see before. You’ll be able to experience what you didn’t experience before. When you become humble worries and anxieties will disappear and this humility is a foundation upon which you build your leadership, you’ll become a very strong resilient leader.