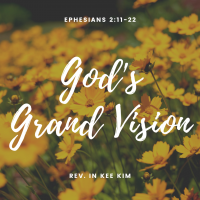 Paul saw a grand vision for humanity in Jesus. He saw the dividing wall that existed between human beings being destroyed and a new humanity arising out of two.

For he (Jesus) is our peace; in his flesh he has made both groups into one and has broken down the dividing wall, that is, the hostility between us. (Ephesians 2: 14)

What a wonderful image! The dividing wall is broken down. Two have become one. You and I have become WE. No more I and them. But WE. Because you are, I am. This was what God wanted to do for us. God already showed this kind of vision through the prophet Isaiah.

The wolf shall live with the lamb,

the leopard shall lie down with the kid,

the calf and the lion and the fatling together,

and a little child shall lead them.

The cow and the bear shall graze,

their young shall lie down together;

and the lion shall eat straw like the ox.

The nursing child shall play over the hole of the asp,

and the weaned child shall put its hand on the adder’s den.

They will not hurt or destroy

on all my holy mountain;

They will not hurt or destroy on all my holy mountain! All of them will live in peace and harmony. That was God’s ultimate vision for the humanity. Jesus came to this world to start working out this grand vision of God. Jesus came to this world and saw the divided world. Jews and gentiles were divided. Men and women were divided. Masters and slaves were divided. Jesus wanted to create a new humanity out of this divided world. Paul saw clearly what Jesus did. Paul understood Jesus and what he wanted to do. Paul was sharp. In Galatians, Paul said,

Jesus became the bridge, not the dividing wall.

For his vision of creating one new humanity out of two, Jesus gave his life. We can see that in Jesus’ last prayer before he died. His prayer was like his will. It was all about being one.

He (Jesus) has abolished the law with its commandments and ordinances, so that he might create in himself one new humanity in place of the two, thus making peace,… (Ephesians 2:15)

Becoming one is more important than keeping these commandments. What good are commandments if they are the reasons for the humanity to be divided?

Then what is that dividing wall that shattered humanity into pieces? HOSTILITY. Let me read the verse 14 again.

For he is our peace; in his flesh he has made both groups into one and has broken down the dividing wall, that is, the hostility between us. (Ephesians 2:14)

Hostility killed Jesus. On the cross, human hostility showed its face in its most naked form. Jesus constantly preached love and yet people responded with hostility. Hostility is the evil that exists within human heart. And this is what divides humanity. This is the dividing wall between you and me. Jesus saw that.

(Jesus) might reconcile both groups to God in one body through the cross, thus putting to death that hostility through it. (Ephesians 2:16)

Yes, sometimes we get angry. Especially when injustice is done to us and to those who are vulnerable, we get angry. Even Jesus was angry. His anger was holy anger or just anger. But hostility is different from this kind of anger. Hostility is to see others as enemies to conquer and threat to get rid of.

Hostility eats us up. It destroys good life. It destroys happiness. It destroys our relationships. It kills many more people than this virus. It causes war, abuses, animosity, and hatred. It is probably the most dangerous and harmful evil that destroys this world.

Hostility – This is a big problem in the world. This is also a big problem personally for many of us. We have become impatient and intolerant. Easily our hostility acts up and we become abusive to others in our actions and words.

Last Sunday, England lost the game to Italy and lost the championship. It wasn’t a shame to lose a game but what people did was a shame. British police opened investigations Monday into the racist abuse of three young Black players who missed penalties in England’s shootout loss to Italy.

Rashford was one of them. Rashford is a wonderful man. He has been at the forefront of a campaign against child poverty, which convinced the British government to restore free lunches for thousands of poor children during the coronavirus pandemic.

Many people live being enslaved with hostility. It is like living with a ticking bomb. You don’t know when they will explode. Hostility is not just what you do. It is what is seated deep within you.

Hostility manifests itself in many different ways. The obvious manifestation may be anger but that is not the only way. Discrimination, passive aggressive attitude, vengeful actions, self-righteousness, and so on.

Hostility – it is what divides us. It is like poison to humanity. It is poison to destroy our relationships with each other. Because of hostility, we don’t accept each other.

We are very different and it’s ok to be different. There is nothing wrong with that. Our differences are what we should celebrate. They should not be the reason to look down upon each other and hate each other. There is a nice song I like by Ella Fitzgerald and Louis Armstrong. You say potato, I say potahto. You say Tomato, I say Tomahto. What’s the matter? The song says at the end, “we need each other.” Yes, we need each other. We don’t need to take each other with hostility. They are not our enemies. They are our friends. Be patient. Be gentle to each other. Accept each other.

We are so different but these differences themselves are not the reason for us to hate each other and be divided.

We don’t need to live with hostility. That is not what God wants from us. God wants us to live in peace and harmony.

Let us deal with hostility within us. Jesus gave us his love for us to be able to deal with our hostility. Love one another. It is easier said than done. I know. But we still have to do that. Jesus showed us the greatest gift, that is love. There is no room for hostility in love. Whatever situation we may be in, don’t let the hostility be what controls you. Let love be what you guides you. You are Jesus’ disciples. Jesus crucified hostility on the cross. We are called to live in peace and harmony, bringing about unity. Hostility divides. Love unites.