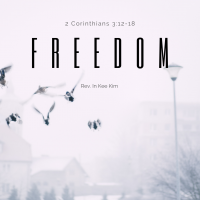 Freedom is very important for our meaningful existence and that’s why freedom is very, very precious. It is something that we should hold on to. We should never let go. We should never take it for granted. This freedom is something very precious and every single person has a right to live with Freedom. When we look at our human history, you can see that it is a history of struggling for finding that freedom. People who are oppressed by those who have power and privilege, they had to fight for their freedom. For that freedom, people died, People shed their blood and people sacrificed their lives. Freedom did not come easily. When you look at the book of Exodus, it is a story about Israelites finding freedom from the bondage of Egypt, and as you read the story, you realize it’s not very easy to go through that journey of freedom and to ultimately find the freedom.

Last Friday was not March 1st, it is the hundredth anniversary of the Korean Independence Movement. For Koreans, March 1st was a very important date. 1919 March first Koreans were occupied by Japanese, and lots of people came out on the street protesting that no one country has a right to invade and exploit other countries because they have more power. They believe that so they cried out for freedom, risking their lives. They all came out of the street and cried out for freedom because the believed that doing that is a protest against people who take others’ basic human rights. 33 people signed the declaration of independence, out of 33 people, 16 people were Christians, and out of those 16, one elder is the great grandfather of one of our congregation members in KSM. And also, that was what my father did in the latter part of the Japanese occupation during his study of law in Tokyo.

He came over to Korea during the summer and he went to the village and educate the village people, how important this basic human right was. And ultimately he went to China and fought against the Japanese regime and declared the independence of Koreans, and he was arrested and he was taken to the prison in the southern part of Korea. And he got two years and six months of the sentence of imprisonment and he was freed when the Second World War was over. That is the cost of achieving freedom. During the March 1st protest, 7,500 people were killed and 47,000 people were arrested.

Jesus also came to give us freedom. Jesus saw the condition of the people who are in deep bondage. He came to free us from that bondage and that wasn’t easy either and there was cost. Jesus gave his life for the freedom he fought for. Saint Paul said today, now the Lord is the spirit, and where the spirit of the Lord is, there is freedom. Wherever Jesus is, wherever the spirit of Jesus is, there is freedom. And Paul experienced that freedom in Christ. When he was in Judaism, he didn’t experience, even though he did a lot of religious things, he didn’t experience that freedom. But when he met Christ, when he found Christ, he found freedom in Christ. Where there is freedom, there is no fear. That’s what freedom does. Freedom is almost like freedom from fear.

So wherever there is freedom, there is no fear. St Paul talked about the veil today. He said many people still had that veil covering up their minds. And I was wondering what that veil was. When Moses went to get the first 10 commandments, he took a long time. So a lot of people were impatient and they were scared without their leader. So they coerced Aaron to make a golden calf for them. And Aaron was scared of the people because they were so strong. So he made the golden calf for them. The people are scared of their vulnerable situations. So everybody was scared. Everybody was filled with fear. Aaron and also the Israelites; everyone. So they built the golden calf hoping that this golden calf gives us some security. So they were dancing around the golden calf. As Moses was coming down, he saw them dancing around the golden calf and he threw his tablets, 10 commandments and broke them. And the second time he went up to get the 10 Commandments. As he was walking down and called out people to read the 10 Commandments, his face was filled with glory because he met God, and the people were scared of that light because they have the sin of building up the golden calf.

So Moses covered his face for the sake of the people so that they could come and listen to what Moses had to say. The veil indicated the fear of the people. He put the veil because people are scared. But Paul is saying that that veil same veil is still on their minds. They are still filled with that fear. This is what he said. To this very day, whenever Moses is read, a veil lies over their mind. Paul saw that they still lived in fear, and then Paul declares now the veil is removed in Christ. This is what he said. When one turns to the Lord, the veil is removed. Jesus removed that veil by forgiving them. He took away that fear from people. When you are in Christ, you have no more fear because fear is taken away, removed by the grace of our Lord Jesus Christ.

Paul articulated this differently in Romans. He said, for all who are led by the Spirit of God are children of God. For you to not receive a spirit of slavery, to fall back into fear, that’s what slavery does. You don’t have a spirit of slavery to fall back into fear, but you have received a spirit of adoption when we cry, Abba, father. So many people still live with fear. Fear makes people timid. Fear paralyzes them. Fear takes away freedom from us. Fear is like a veil covering our minds. You don’t need to live anymore with fear. You don’t worship God and all the good things because we are scared. If I don’t do it, God will punish me. You don’t do that because of fear. We do that because we experience God’s Love, God’s grace, God’s abundant blessing. That’s why we do good things. That’s why we worship God. The different motive of worshiping God.

This is what John said. There is no fear in love. The perfect love casts out fear for fear has to do with punishment and whoever fears has not reached perfection in love. Because God removed the fear from us. We can now experience true freedom. Not because of the weather’s good but because Christ removed that fear from us, now we have freedom. Freedom is the power, the power to live your life with courage and boldness. Freedom gives you tremendous empowerment. Don’t let life challenges intimidate you. You are God’s beloved children. You are in God’s, strong hands. Be Free from your worries and anxieties. Seek the truth and that truth will set you free. That is a message Jesus came to proclaim and that is a message Paul is proclaiming to us today. Listen to the word of God. Be Free in Christ and live out for justice fearlessly, boldly, courageously.