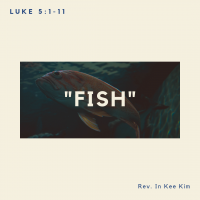 Thank you choir. Theme of today’s story is the fish, so I want to talk about the fish today. Peter and John and James were partners in business and they were all fishermen. Their lives were centred around the fish. If they catch a lot of fish, they feel good and they feel confident and they feel happy. Their lives depended on the fish and fish was very much connected with their identity. In their minds there was always the thought of fish and by fish their existence was almost defined. Fish was everything to them. Do you have that kind of fish in your lives? We do. It can be our jobs, our children and even ourselves. We dedicate our whole self for this, our time, our passion, our talents and everything, but also because of fish. We worry, struggle, we go through pains and we get discouraged because it is so important to us.

You don’t stay up all night for things that are not that important to us because it is so important to us, we worry and sometimes we spend all night worrying about it. We struggle and many times we get discouraged because we don’t have enough. We see Peter who was really discouraged because of fish all night he tried, but he cannot catch much. He was so discouraged that he didn’t care about anything else. Nothing mattered to him. When you look at the story, the whole crowd, the whole bunch of people gathered together just to listen to Jesus’ word, but Peter, he didn’t care. He was just was washing his net. I don’t think he even mattered to him, and Jesus saw Peter from up far and he saw Peter being quite discouraged. Jesus understood his discouragement. That’s our Lord Jesus. He knows how we feel so well.

Deep inside our worries, our fear, our anxiety, our pain, our discouragement, and our failures. He knows all of ourselves, all about ourselves, and Jesus saw Peter too and his discouragement, but he didn’t leave Peter alone. Jesus chose his boat almost intentionally. Jesus came to where Peter was. Luke five three says he got into one of the boats, the one belonging to Simon, and Jesus told Peter to put the net out into the deep water. Verse Four says, when he had finished speaking, now he’s going into real business. After he taught the crowd, he really wanted to reach out to Peter after when he had finished speaking, he said to Simon, put out into the deep water and let down your nets for a catch. Peter did it and indeed caught a lot of fish. There I got stuck. Yesterday, a whole day until late at night, 11 o’clock and then I went to sleep and this morning I got up at 4. Why? I asked myself, why did Jesus do that? I was wondering, I mean, clearly he was not Jesus ultimate purpose to help Peter catch many fish. That was not Jesus main ultimate purpose in the end, didn’t Peter Leave everything to follow Jesus? Why did you let him catch so many fish when ultimately in the end he will just give up, throw away everything else and follow Jesus. Why did Jesus do that? When you look at verse 11 when they had brought their boats to shore, they left everything and followed him. So this was what I struggled with.

A Lesson of a Lifetime

But when I reflect on, I found one thing, I realized that there was a change in Peter after he caught so many fish. Before the fish was his life goal and his everything. He lived for fish. He was always thinking about the fish, and he confirmed himself and his identity through the fish. But after catching so many fish with Jesus’ help, the fish became something else to Peter, he saw something different in the fish. The face of the fish changed. In another way, he realized that fish was God’s blessing. There was God’s gift. He was not something that he worked so hard to get it, but he was just purely simply God’s blessing and God’s gift. He realized that was what Saint. Paul confessed, wasn’t it? Whoever did inner voice this morning.

This is what St Paul said for I am the niece of the apostles unfit to be called an apostle because I persecuted the Church of God, but by the grace of God, I am what I am and his grace towards me has not been in vain. On the contrary, I worked harder than any of them. Though it was not I, but the grace of God that is with me. That’s what St Paul realized and now was what Peter realized. As soon as Peter realized that the fish was God’s gift, something wonderful happened, he was able to let go of his attachment. When he thought that this is what I worked for and this is what I got, what I achieved, he can not let go. But as soon as he realized that that was just purely God’s gift, him blessing, he was able to let go, and ultimately he was able to leave everything and follow Jesus.

Then I understood why Jesus helped Peter catch so many fish. Made me realize that the fish is God’s gift and God’s Blessing. You don’t become enslaved to it does matter how much you have. Doesn’t matter how many fish you may have, you will never be enslaved to. When you realize that that is God’s gift and blessing, you can experience the true freedom. If there is a lot, you’re just thankful. If you don’t have much, that’s okay. You become totally free from that. Peter experienced the overflowing grace of God through this incident. One boat was not enough and he had to call for help from his friends and two boats filled with the fish and then almost sank. This is what Luke describes, so they signaled to their partners in the other boat to come and help them and they came and filled both boats so that they began to sing. That’s what blessing looks like. Blessing is always overflowing, is beyond what we can imagine. He experienced the abundance of God’s grace. That is true happiness. I believe that that is true happiness, that the fish itself will not give you the happiness, but when the fish comes to us as God’s gift him blessing, then God’s abundance, then then that will give the happiness.

Peter found God’s grace in the fish. Fish was not fish, just fish anymore. In that fish, there was God’s grace. That is the secret of happiness. We all received so many things. When you look back, you are tremendous blessed. Some of our members who are doing very well working downtown, they come to me and say reverend, I don’t deserve all this. I really don’t deserve all this. I don’t know how I got all this, but I don’t deserve this. You’re right. You’re right. God, we have so many things and when we realize that’s God’s gift, your life will become abundant. He wasn’t just your effort or ability.

That was God’s gift. If you don’t realize that you become enslaved to it. Only when we realize that it is God’s wonderful gift, we become filled with gratitude. We not only enjoy them, but we become so free that we don’t become attached to them. You can share, you can let go. You can hold it so tightly just for yourself. You can let go and share the blessing with others. God wants to bless you and bless you abundantly. But if you take God’s blessings for granted or take it with your greed, you’ll become very unhappy person.

Jesus knew that Peter would find God’s grace in the fish. Ultimately, Jesus knew that. That’s why he was able to bless him so abundantly, unlimited blessing because Jesus knew that Peter will not ruin his life because of those blessings and ultimately Peter left everything and followed Jesus. Christian life is possible when we experience God’s grace. Leadership begins when we experience God’s grace, Jesus wanting to call Peter and make him disciple leader, but first thing Jesus did was to let him experience abundant grace of God. The true leadership begins when you experienced the abundant grace of God. He was able to freely follow Jesus, my friends. There’s nothing for you to worry about. God will take care of your needs. God will bless you abundantly, but know that that’s God’s blessing and gift and live freely sharing your blessings, blessed life with others, and there’s nothing for you to worry about. What you shall eat while you shall wear because God will provide all your needs. More than you need sometimes abundantly. Let us sing together.