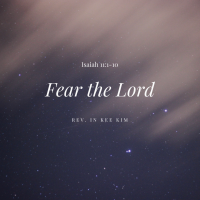 Jesus said, “Do not fear those who kill the body but cannot kill the soul; rather fear him who can destroy both soul and body in hell“. The Psalmist also said, “The fear of the Lord is the beginning of knowledge; fools despise wisdom and instruction“. The prophet Isaiah into today’s passage also said that his delight shall be in the fear of the Lord. This is kind of strange statement isn’t it. Fear and delight, they don’t go together. When you fear you don’t delight and you’re happy you don’t fear, but somehow Isaiah put those two words together, delight and fear. I’m sure there is a deeper meaning in this. Fearing God seems to be an important quality in Judeo-Christian tradition. The Bible emphasizes the importance of fear of God. Hebrew prophets, including Isaiah seem to strongly emphasize the importance of the fear of God.

You have to know the context. When Isaiah wrote this piece, Judah was invaded by the superpowers and the superpowers came in and took everything. They all felt through their skin that this power can take away everything that was important to them. My property, my wives, my children, the temple, they felt through their skin, that these people could take away everything that was precious and important to them. So they lived with this deep fear every day. That’s how powerless people live; with lots of fear. Because they are vulnerable. They don’t know when they were going to be attacked, when their things were going to be take away. So they lived every day with this deep fear. To these people who live with deep fear, Isaiah and other prophets told them “fear, God”. They are already in fear, why do they emphasize more fear? “Fear God”, they said. I was wondering why they were saying that. If they say ‘do not fear’, or if they say ‘believe in God’, that makes more sense. But fear of God, what did they mean?

A lot of terrible things happen in our lives. Every evening we hear terrible, tragic things. Every night, every morning, our circumstances make us feel very vulnerable. We feel weak. People with power are not necessarily merciful. They can be more cruel, sometimes. The powerful people can take advantage of weaker people. And that’s what they do a lot of times. So people want to have power so they are not to be taken advantage of. And this causes conflicts and tension, not just among people, but among countries. There is a ‘if we don’t have power over them, they will have power over me’ kind of mentality and attitude. As a result, we all fear each other. If I don’t have power over that person, that person may have power over me. This causes fear in each other. People don’t seem to care much about justice, love, and peace anymore. They believe the power is the only thing that can help them overcome their fear. Power is the only thing they can hold on to, to save themselves from fear. But no matter how much power you may have, you become more fearful.

That kind of fear is to do with punishment. You have a lot of these fears to do with punishment. Some people even think about God in that way. They feel God with this kind of sense of punishment so they’re scared of God. That was what Adam had in the beginning, after he committed sin. This is what the Genesis writer told us, “But the Lord God called to the man, and said to him, “Where are you?” He said, “I heard the sound of you in the garden, and I was afraid, because I was naked; and I hid myself.” He was afraid. He was scared.

Fearing the world is being afraid and being scared punishment. But this was not what prophets were talking about when they talked about fear of God, God got rid of this kind of fear through Jesus Christ. John described it very well. “There is no fear in love, but perfect love casts out fear; for fear has to do with punishment, and whoever fears has not reached perfection in love.” We love because he first loved us. We Christians don’t live with this kind of fear anymore. We should not live with this fear of punishment.

Fearing God is not being scared of God’s punishment. The almighty God who has all the power is not against you, he is for you. That was what Paul said in his letter to Romans. “If God is for us, who is against us?” No one, nothing. No one can be against us. Our fear of God is not about punishment, our fear is about his deep love for us.

Fear of God is the Love for God

Our fear of God is our confession that we don’t need to fear anything else in the world because nothing in the world can destroy us. We can see that very clearly in Paul’s confession, “Who will separate us from the love of Christ? Will hardship, or distress, or persecution, or famine, or nakedness, or peril, or sword?“. Nothing can separate us from the love of God. We fear nothing, we fear only God. God is the only one who holds our life together because nothing in the world can separate us from God’s love. We don’t need to fear anything. Don’t live with fear. In fear of God, our confidence in God’s love is hidden. Fear of God and love of God are the same thing. It’s two sides of the same coin.

That was what Isaiah was able to say. His delight shall be in the fear of the Lord. Fear and delight can go together when you understand fear in this way. If that fear were the fear of punishment, you can never enjoy that fear. Fearing God is a beautiful thing. We see humility in those who fear God. We see deep respect and love for God in that fear. We see the courage to say that nothing can intimidate us. When we all fear God we will live, not fearing each other, but we’ll live with deep respect for others is instead of fearing them. Don’t fear those who are different from you. Don’t fear those whose life is different from you. Don’t fear those who have different ideas. That causes only fighting, conflict, and tension.

To those who fear God, God will give us wisdom. When we have that wisdom, this will happen: “The wolf shall live with the lamb, the leopard shall lie down with the kid… they will not hurt or destroy“. They will find true peace. Living with love is much more powerful than living with fear. And that love is a fear of God. Deep respect for God. Be strong in the world. Don’t let people intimidate you. The only thing that we need to fear is God.