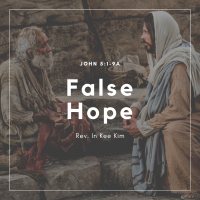 You read this story today and I would like to reflect with you. What is the implication of that story? What is the message from that story? There was a man who had been sick for 38 years and a pool called Bethesda. Sometimes it’s called Bethesda. The pool was known for healing people. If the pool had a power to heal people, and from time to time, angels will come down and strike the water. And then the waters skirt up, the first person who entered into the pool will be healed. So that was a kind of legend from the pool. And the name Benzema that means the house of mercy. So it’s a house of mercy to heal, but if you really think about that pool or pond, I don’t think it’s really a house of mercy.

Just assume that an angel came down and struck the water. Just can you imagine what would happen there? The whole bunch of people there and all of a sudden people start running, and then they’re pushing each other so that they could, get there first. How can it be House of mercy? Rather a house of fears, competition. He was not alone. There are a lot of other people there. And he was late. What chance did he have? Practically, he had no chance to be able to be the first person to enter the pool. That’s why when Jesus asked him, do you want to be made well, he said this, Yes. I wanna be made well. He rather said, sir, I don’t know how to put me into that pool when the water is screwed up. And while I’m walking my way, someone else steps down ahead of me. That was what is in his head. All the time, he was sitting there, the only thing that he was thinking about was cheating. I can never be the first person to enter into that pool. Whatever we think we speak, whatever we think of comes out of our mouth. So the first thing that came out of his mouth was not yes Lord I want to be healed that was not, what he said. He said I can never be the first one to enter into that pool.

Don’t we often do that? If Jesus asked, do you want to be happy? Instead of saying, yes Lord I want to be happy, we give all kinds of reasons why I cannot be happy. I don’t have enough money. I don’t have good friends. I’m lonely and I don’t have health and all kinds of reasons instead of saying, yes I want to be happy. Instead of saying that, we give all the reasons why we cannot be happy. This man thought that he couldn’t be healed because he was not the first person to step into the water. He believed that he could not be healed because he cannot beat other people. He could not be better than other people. Because that was the rule of that Seda in that area. That was the rule and he knew that rule so well. Only the first person who enters the pool will be healed. He knew that rule.

The fantasy that you have lived in, the false hope, you have to finish to survive and you have to be the fastest to be healed. The world we’re living in is not much different. We also live with this false hope that we can live a good life only when we are the best. With that mentality, What are the other people? If you live with that mentality, what are all the people, you always have to be better than others. Other people are not your friends. Other people are your enemies to conquer. They are a threat. Even in the family. No community is possible when people live with that kind of mentality, but this world continuously feeds, that kind of toxic mentality and we admit, I still dance. Well, supposed to be the world supposed to be what life is supposed to be. I don’t think that’s what life is supposed to be. It just kills us. It just kills the spirit of people, it kills the community, it kills everything. In that kind of attitude, there’s no place for love and bonding. We’re suspicious of each other. We create walls around us and we grieve this toxic mentality. Everyone wants to be the first. America first, Canada first, Britain first.

Jesus said the first will be last, and the last will be first, Oh, you don’t want that? No Jesus, man, I don’t want that. Jesus said that the greater should serve everyone else. Well, Jesus, I don’t want that. Do you want to be the first? Is there, healing there? As long as I secure that place. I don’t care. I needed that tough first. The first group, as long as I secure that I don’t care about anything else. This is a fantasy that is false. There is no healing in being the first. When Jesus healed this man, he clearly showed that you don’t have to be the first to be healed. That’s the message Jesus declared. By healing this man, he was not the first. By healing this man, Jesus showed that you don’t have to be the greatest to be healed to be saved.

The false hope only killed my spirit and drags us into total darkness. This hope will destroy humanity. It’s interesting that men cannot even say that he wanted to be healed. When Jesus first asked, do you want to be made well? I find it very strange. Why did Jesus ask that kind of question to a person who had been sick for 38 years? Do you want to be healed? Of course. So I found it very strange that Jesus asked that question. But come to think of its really, really profound question. Because, he didn’t say that I want to be healed. In other words, he did not live with the desire to be healed. He lived with bitterness, the first way you said was it. Somebody else, although I heavily, he lived with envy, he lived with bitterness, he lived with this kind of inferior complex. That’s what false hope does. False hope creates inferiority complex Just crease more darkness.

That’s what false hope does. But the real hope creates the desire to be healed and whoever has that desire to be healed. Jesus will heal. Not the person who is first. Not the person who’s the most popular, not the person who was more powerful, but the person who has true desire to be healed. That person will be healed. That is how mercy works. Mercy never works like it works in Bethesda. The world we may be living in the world, the world we live in maybe Bethesda. But we are born again in the kingdom of God. Where everyone deserves to be healed. God’s mercy, doesn’t work in the way we think in the modern competitive world. Beating others they make you feel good temporarily? But it doesn’t really lead in healing. Let us ask ourselves. What is in my brain all the time? What is in my mind all the time? This man, all the time he’s in this great, that somebody else’s land. That was always what he was thinking. What is in your brain, all the time? What are you thinking? But when you come to Jesus and then come with true hope. Not false hope. My friends, let us not be deceived by the false hope that this world gives us. This is what I got from the story.