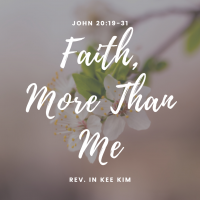 He was very specific. He knew exactly the condition for his belief. He demanded this condition to be met before he said he would believe.

Jesus appeared to the disciples after he was resurrected. Unfortunately, Thomas wasn’t there. The other disciples told him that they saw the Lord.

I can understand how he felt. He could not pretend that he believed when he did not have this conviction. He was honest.

I think there is a lesson for us to learn. Honesty is the first step of faith. Honesty is where our spiritual journey begins.

Last week, one of ESM members told me that what I said about hope rang true to him.

Hope in a good situation is not really hope.

And he asked me about hope without action. Is it real hope if it doesn’t lead to action? I told him, if it is real hope, it would lead to action. Hope and action are not two separate things. They are connected. One and the same.

Faith is the same thing. If it is a real faith, it will give you peace and confidence. Fake faith will not be able to give you that. Thomas could not fake it. He was honest. He showed us a good example of finding faith. Because of Thomas’ honesty, he was able to meet Jesus again and see him. His honesty brought back the resurrected Jesus again. Just for Thomas, Jesus came again.

Jesus knew Thomas’ struggle. He knew Thomas’ doubt. He did not abandon him. He rather revealed himself to Thomas.

When you honestly seek God, God will show himself to you. Yes, that’s all you need. HONEST STRUGGLE AND HONEST DESIRE TO MEET GOD.

When Thomas met Jesus, what did he do? Did he look for the mark of the nails in Jesus’ hands? Did he put his finger in the mark of the nails? That was his condition for his belief, wasn’t it? Unless that condition was met, he said he would not believe. But when he met Jesus, this condition was not necessary. Even when Jesus invited him to see the nail marks and touch them, he didn’t do that.

My Lord and my God!

That was the highest confession anyone could make about Jesus. Until then, nobody really called Jesus God. At most the Son of God.

There was change in Thomas. He thought his faith was BASED ON WHAT HE COULD SEE AND WHAT HE COULD FEEL. He thought it was very much to do with how he perceived. He thought faith was to do with him, his conviction and his assurance. We are like him too. If we feel good about God, then we can say we believe. If we see some assuring signs, then we say we believe. How we feel and how we perceive are very important to us. It’s all about me and how I feel about God.

When I was in university, I used to study at Robarts library. It is U of T library. 13th floor, Red section. That place was like my second home. When you get to the corner, it faces East and you can see the whole campus. That corner was my sanctuary. It was my sacred place. Jesus often went to the mountain to pray. That was my mountain. I often went there to pray.

One day, I wanted to feel God more. So, I asked him. Lord, can you show me a sign? You are almighty. You can use the cloud. Maybe something similar like heart shape? Or do anything to assure me that you are there. God didn’t give me any sign. Even if he gave me the sign, soon, I would have wondered whether it was just a coincidence. That is not how faith comes about.

In Jesus’ time, people were looking for signs too. So when they saw the miracles, they believed Jesus. But that kind of faith did not last too long. As soon as they saw Jesus’ suffering, they all deserted him.

An evil and adulterous generation asks for a sign, but no sign will be given to it…’ (Matthew 16:4)

When they saw the sign, they felt good and they felt that God was right there and so they believed. BUT WHEN THEY SAW NOTHING, THEY FELT EMPTY, DOUBTFUL AND FELT THE ABSENCE OF GOD AND SO THEY DIDN’T BELIEVE.

LOOK AT JESUS ON THE CROSS. Jesus felt the total absence of God on the cross. He said, “My God, my God, why have you forsaken me?” He felt forsaken. He felt abandoned by God. He felt total silence of God.

And yet, in the end, this is what Jesus cried out.

That was Jesus’ very last word on the cross. Even when he felt the absence of God, in the end, regardless of how he felt, he  handed over his life in God’s hands. The Greek word for “commend my spirit” is “hand over my spirit.”

Last Thursday, one of KSM elders treated pastors for lunch. He said, when he was young, he had faith. And with the faith, he did this and that. “He had faith” was important to him. But as he got older, he said, 맡겨 is very important. 맡겨 – leave his life, or hand over his life. He said he 맡겨 to God, to his children, and to pastors. This “handing over” is very important, he said. It is not about how much faith he has, it is about leaving everything in God’s hands.

Yes, that is faith. It is not about how much I know about God, how strong I feel about God, how convicted I am. It is simply leaving our life in God’s hands.

Once a father came to Jesus because his son had a serious problem. No one could cure him. Even the disciples could not heal him. So finally he came to Jesus and said, “If you can, can you please heal my son?” Jesus said, “What do you mean if I can?” Nothing is impossible for those who believe. And the father said, I believe. But immediately after that, he said, “help my unbelief.” “Help my unbelief!” That is faith. All I have is this unbelief, but I leave my son in your hand. Help my unbelief. RECOGNIZING YOUR OWN UNBELIEF AND YET LEAVING YOURSELF IN GOD’S HANDS, – THAT IS FAITH.

Thomas was very honest with his doubts. That was the first step. But he didn’t realize that faith was not about him, seeing or feeling. When he met Jesus, he realized that. His faith moved from the honest stage to the stage of leaving himself in God’s hands stage.

Yes, my friends, at times, we feel the total absence of God. When we see the world and when we go through hardships, we are not sure whether God is there. We are not very sure about ourselves and even about our faith.

What Job confessed is often our confession.

If I go forward, he is not there;

or backward, I cannot perceive him;

on the left he hides, and I cannot behold him;

He couldn’t see God anywhere but what did he say

His faith was not about how assured he was about God. HIS FAITH WAS BASED ON GOD AND GOD ALONE. HE KNOWS THE WAY THAT I TAKE…

As we live our lives, leaving ourselves totally in God’s hands, God will show himself to us. And real faith will be slowly formed within us. And we can say at the end, “my Lord and my God!” Faith – it is more than me.