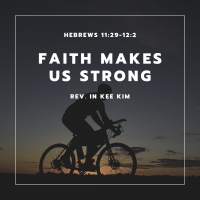 Pastor Dave in our lectionary study said, “Faith is like an engine.” I thought it was a pretty good analogy or metaphor for faith. Faith is like an engine that runs a machine, moves a car, and makes the airplane fly. If we have faith, it’s like having an engine of life that moves your life forward. The stronger the engine is, the better we’ll be able to pass through the storm. In life, you’re bound to hit a wall. I’m sure you’ve all experienced some kind of wall in your life. It is the same for everyone. When you live life, sometimes you hit a wall. When you try to do something, you hit a wall. Whether it’s a sport, or art, or research, or study, or even spiritual life, we all face a wall. No matter how hard you try, you don’t get any better. You get stuck. And that’s what a wall looks like. But the wall is not there for you to give up. The wall is there for you to overcome, not to give up. To overcome the wall, you need faith. That’s where faith comes in in your life. When you hit a wall, whether in a relationship or whatever, when you hit a wall, to overcome that, what you need is faith. Without faith. It is easy to give up.

Ultimately, he accomplished his dream. Hebrews writer made a whole list of examples of faith and in these examples of faith, he was almost saying that Israelite history is a history of faith. All the Biblical figures are the people of faith. That’s what he’s saying basically. By faith, the people pass through the Red Sea. By faith, the walls of Jericho fell. Through faith, they conquered kingdoms. Through faith, they quenched the raging fire, shut the mouths of lions. Through faith they escaped the edge of the sword. One’s strength out of weakness became mighty in war. But you know what is really amazing comes out at the end in his list.

He said, “Because of faith, they were tortured. Refusing to accept release.” They suffered mocking and flogging and even chains and imprisonment. They were stoned to death. Their song into, they were killed by the sword. It’s a very interesting example. In the beginning, he talks about the miracles and victories. But at the end, he’s talking about persecution and hardships. In other words, through faith, not only do they experience miracles and victory, but through faith, they persevere through failures of life and even hardships and persecution, even death. That’s what faith is like. Because they had strong faith, nothing could stop them. Hardships and difficulties could not stop them from having faith. Faith makes us strong. If you’re not strong, we cannot survive this world. We have to be strong, but we don’t have that kind of strength. Only through faith can we persevere through the hardships and ungraciousness of this world. The strength the faith gives us moves us forward. When does our faith become weak and shaky? When does our faith become weak and shaky? When our prayers are not answered as we prayed. We try our best and yet so many more problems come to us. No matter how hard I try, we cannot overcome them. That’s when our faith becomes weak and shaky. We question our faith. We wonder whether it is any use to have faith.

Today, what did the Hebrews writer say, “Yet all these, though they were commended for their faith, did not receive what was promised.” They didn’t get what they wanted all the time. They didn’t receive what was promised to them. They even died without seeing the result. When I realized that the result was not any more important to them, regardless of the result, they kept their faith because they saw something greater than that. That’s the faith of martyrs.

They didn’t give up because they didn’t see the result. He became people of faith who would keep their faith in whatever situation they might have been in. I think that’s a strength, that’s a character. I’d like to see more young people and modern people to have strength, character in life. We are giving up too easily. We are just looking for convenience. We do it only when everything, all the situations, are right for us. We don’t persevere through suffering and hardships.

Our ancestors didn’t do that. They persevered through the hardships difficulties. Today’s August 18th. August 15th, Korea was free from imprisonment. I mean the Japanese occupation. But they persevered through the wars and famine and hardships and difficulties. Our ancestors, whether they’re Koreans or non-Koreans, they all went through hardships. They survived. They were strong. But modern people, they’re too weak. Little challenges that we face, we get scared. Little stones with a little waves, we see, and we get scared. And we’re thinking of running away. We are thinking of giving up, sitting down and doing nothing. We got to be strong, otherwise we cannot survive this cruel world. Hebrews writer, the book of Hebrews, was written for the people who are leaving the church. Because of hardships and difficulties, some of them left the church and they gave up their Christianity altogether. And the Hebrews writer is really addressing this issue to these people who are leaving their faith.

This is what Hebrews writer told them, “Let us run with perseverance the race that is set before us, looking to Jesus, the pioneer and perfecter of our faith, who for the sake of the joy that was set before him endured the cross, disregarding his shame and has taken his seat at the right hand of the throne of God.” In modern days, it’s really hard to be a Christian. It’s really hard to live a life of sacrifice, to live a life of serving. Run, my friend. Let us run with perseverance. The race is not over yet. Keep your faith. No matter how tempting, how difficult our situation may be, let us keep our faith.

Real faith will be revealed when times are difficult. Real faith will shine more brightly in difficult times. That is real faith. I’d like to show a slide. You don’t see anything right? When good times, there’s writing though in there, when you look very carefully. In good times, you cannot see faith and we don’t need to show our faith. When the difficult time comes, you see that faith shines more brightly. When the background is dark, when our life is dark, that’s when the difference comes. People who have faith, people who don’t have faith. When difficult times come, people’s faith will show more clearly. When life is hard, what we need is faith. Not your brain, not your strong will. You know, you experienced it. They don’t help much, but when difficult times come, remember to have faith and that faith will keep you strong. That faith will take you to heaven. Only faith.