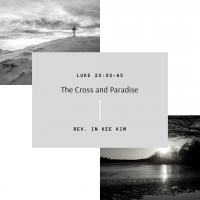 Salvation is a very important question. We all ask this question about salvation. What is salvation? People at the cross also asked this question. There are different people at the cross. They all came for different reasons. The Roman soldiers were carrying out the execution of the crucifixion of Jesus and to criminals and there were also Jewish leaders who did not like Jesus’ thinking and thought that he was dangerous to their well established religious system, and they hated Jesus. They brought Jesus to this horrible death, but there were also ordinary bystanders who came out to see the last moment of the men who claim to be the savior. They were curious whether there will be any things, something like a miracle that would save this savior. So there were different people. They all came for different reasons, but they had one question in mind. All of them had one question in mind that was, can he save himself? Can he save himself? All of them were different, but they raised the same question. Can he save himself?

Roman soldiers mockingly said, “if you are the King of the Jews, save yourself” Jewish leaders caught after him saying he saved. Others, led him, save himself. One of the criminals was filled with fear and asked Jesus angrily as though he was pleading with, Jesus said, are you not the Messiah? Save yourself and us. They all ask the same question. One question, can he save himself? Marking, scoffing, and anger. They all express different emotions, but they were interested in the question of salvation. They were all curious about whether could escape or save himself by escaping the cross. Somehow that was their idea of salvation to them. Salvation was escaping the cross. That was what salvation was. That is the idea of salvation. For many of us may have, for many of us, salvation is escaping from tragedies, hardships, suffering, and difficulties. That’s what salvation is. Yes, it is one aspect of salvation. I agree. It is one aspect of salvation with God as our refuge, we can save ourselves from the troubles and hardships to the people at the cross. The cross was cursed. It was hopeless. It was a total defeat. It was death and he was the evil itself. That was what the cross was. And their idea of salvation was to escape all these things at all costs.

Fear of the cross

Pathway to the Kingdom

Cross scares people. That’s why they want to run away, but what is luke trying to say through this story? One message. Did our ancestor luke, one, it wanted to get across one message. He wanted to get across through this story. The message luke wanted to get across was that Jesus was not scared. It’s a cross. He was talking about paradise, not death, not fear, not defeat. Jesus saw something at the cross. Nobody saw only Jesus was able to see through the crack in that cross but amazingly one of the criminals saw what Jesus saw. I was so shocked. How could he see that only Jesus was able to see, but how could he see that? What do they see at the cross? They saw the pathway to salvation pathway, to paradise pathway, to the kingdom. This is what he said. One of the criminals, “Jesus. Remember me. When you come into the kingdom,” Jesus was dying on the cross. They were all on the cross. But somehow this criminal saw that Jesus was going into the kingdom. The cross to him was a pathway to that kingdom. That’s what he saw At the last moment on the cross, the criminal received a spiritual insight. His eyes were open. He was able to see what others didn’t see the other guy at the cross. The only thing that he saw was fear of it. Death. That’s why he was angry. After the KSM I’m service. One of the deacons came to me. “I was so shocked because if I were at the cross, I’ll not have thought about anything else, but death, but how could he see that?”

God will create a pathway

Jesus told him, truly I tell you today, he’ll be with me in paradise. In the cross. Jesus saw the pathway to paradise, troubles, hardships problems, and the cross scares you. So your best way is to run away and that is your idea of salvation. When you see the cross, only with fear, you will see nothing but troubles that can harm you and can even kill you, but when you have courage, you’ll be able to see the doorway to salvation in the cross. Only through the courage, you can see that the courage, the power of fear, the cross has, that was what Jesus did. He bound the power of fear. That crosshead, that’s why he was not scared. The cross cannot intimidate Jesus and that courage comes from faith. Believing that God will save us and protect us through their faith. You can have the courage and with courage, when you see the cross, you will see something else. Then the curse, this was the confession of the Psalmist. He said, “God is our refuge and strength. A very present help in trouble. therefor, well not fear though. The earth should change though. The mountains shake in the heart of the sea though its waters roar in form. Do the mountains tremble with this, I will not fear.” This psalmist knew, Saw something in that trouble that other people didn’t see the pathway to salvage. That was what Isaiah saw in the desert. God will create a pathway.

What Salvation truly is

When you know that God is our refuge and strength, we’ll be able to have courage, you know, to live a life. You need courage. Otherwise, you’re going to constantly run away from life. You’re going to constantly run away from problems and they will cause on a chair, or chase after you and hunt you and ultimately control you. That’s what we will or they will do, but when you have courage, the troubles and hardships and difficulties, they will not intimidate you or scare you. Salvation is not to run away. Salvation is to have courage. The courage comes from faith in God. This is what Jesus said “Listen to what Jesus said in the world. You face persecution but take courage. I have conquered the world.” Everyone has a problem. You will all come across all kinds of suffering, different kinds of suffering, sometimes financial problems, sometimes health problems, sometimes relationships, problems. Sometimes the problem of your children, sometimes problems at work, sometimes problems at school. You may face all kinds of troubles and hardships and difficulties. That is your cross don’t run away from the cross, Have courage and all in all these troubles, you’ll be able to see something. You’ll be able to see it. Door path that leads to salvation. Then your life who were full of joy. When you see that pathway to paradise, your life will be filled with joy. So in that sense, the cross is not necessarily all bad. Cross is a way to salvation. Do you agree? Do you agree? I agree. I believe so. So when hardships come, don’t curse yourself. Why this to me, not to others, maybe their serum blessing the cross, maybe a hidden blessing. Once you know how to handle your problems, you will overcome the world and you will have life. That’s what salvation is.