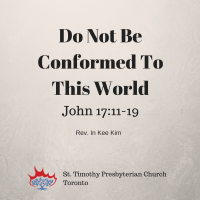 This is the Word of the Lord.

We Do Not Belong to The World

This week I had a particularly difficult time writing a sermon. Sermon writing is not like you craft the writing as you like. A lot of the times what I do is wait for the message to come and it is a little bit different from Bible study. So a lot of times I spend my time reading and reading, reflecting and reflecting and then waiting and waiting. And yesterday, I waited until 11:30 night here at Church and still the message did not come clearly, and this morning at 5:00 I woke up and then meditated on the passage again. Of course I wrote a draft yesterday, but the difficulty about this passage in particular was that we did not belong to the world, Jesus said. When I reflect upon my own congregation including myself, we are so in the world, we are so engaged in the world.

How do I say to people who are so into the world that you do not belong to the world. And that was partly the difficulty about today’s passage. Today’s passage is Jesus’ last prayer on earth. Just before he died, he said this prayer, and then few days later, he would be killed. It was probably the most important prayer because when people die, they say the most important thing; last words on earth, last prayer on earth. Jesus spent three years with the disciples and now he had to say goodbye to them and now they would be left all alone without Jesus. Until now they followed Jesus and just did whatever Jesus told them to do, but this time they had to take the initiative of carrying on the ministry that Jesus began. When Jesus looked at the disciples, they were probably not ready yet, so Jesus was really concerned.

I’m really thankful that the disciples did not give up. They carried on what Jesus did. That’s why we have the gospel, that’s why we have good news, and we have salvation. If they said, oh, this is too much, I don’t think I can carry on this ministry. If they gave up there, then Christianity would not have been birthed. It all depended on their shoulders. The twelve disciples, they were the ones, everyone else left Jesus already. Now, the only people that were left were the twelve disciples and they had to carry on, and the task was too much for them. That’s why Jesus was concerned for them.

The World is Not For us to Enjoy

At times, as Christians we will have difficult times in this world. It is hard to survive in this world. The world is not necessarily a kind place for us to enjoy. We have to constantly prove ourselves about our worthiness. And sometimes we face problems and they are quite overwhelming. It’s like when you go to the ocean the wave comes to you, but not just once, continuously over and over and over again. Sometimes problems come to us like waves, instead of okay, now I’ve had enough problems, no more. Another problem can come. Life can be quite cruel to us sometimes. We feel like sometimes we are surrounded by helplessness and we have no place to hide or escape.

My daughter lives in Boston and I ask all the time, so did you make some friends and then, do you go to church or you know, how’s your life there? And then basically they were saying, oh you know, just work and home, and work and all, we have no friends still and all that. And then Will said, you know, we’re not planning to make many friends here because we’re not going to stay here too long. We’re gonna come back to Toronto, so we are not really worried about making friends. I said yes. If they’re too comfortable there, they won’t come. They would like Boston more than Toronto, because Toronto is a better place.

We Do Not Belong Here

This world is not our permanent place to stay. We cannot be too comfortable in this world. The world may have treated you very nicely so far, but never forget that you do not belong here. You will not permanently stay here. Of course, we should not hate the world or despise the world for God so loved the world that he gave his one and only son. God loved the world so we should also love the world, but loving the world does not mean that you should completely immerse yourself into the thinking of this world. That’s not what loving the world is. you cannot completely attach yourself to the world. While Jesus lived on earth, I think he really enjoyed the world. He had many friends, sinner friends. A lot of them were sinner friends. I think he really, really enjoy the world very much, but I get the sense that he never had a  strong attachment to the world. He enjoyed it. He loved it, but he never attached himself all the way to the world. He did not live to stay here or lengthen his stay on earth as long as possible. When you read John, right from the beginning, Jesus always said, my time has not yet come. My time has not yet come. My time has not yet come. He was waiting for his time. His time of death, time of the cross. Jesus always said, my time has not yet come. He loved and enjoyed the world, but he knew soon he would leave the world, and he has no attachment to it.

That is the kind of attitude Jesus had about this world. He lived only 33 years, very short life. You may say what kind of life is that? 33? But that 33 years, were the most meaningful years and they made a profound impact on other people. With only 33 years living on earth, his life made a tremendous impact on people.

It is one thing to love the world and another thing to totally immerse ourselves into the world. Please don’t be bought into the thinking of this world. Don’t be fooled and don’t be blinded. By the pleasure that this world may give you. St. Paul said in his letter to the Romans, for 11 chapters he wrote about the theory of Jesus Christ and salvation eloquently. And from chapter 12 he described how you should live. The first thing that St. Paul said was give your body as a living sacrifice and that is spiritual worship. And then he said this, do not be conformed to this world, but be transformed by the renewing of your minds so that you may discern what is the will of God, what is good, acceptable, and perfect. When you experience that disappointment, disillusionment with a world do not be so sad. It may be a good reminder that you do not belong here, that you do not belong to the world. Rather, use that as an opportunity to be transformed by the renewing of your minds. Use it as an opportunity to transform yourself then you’ll be able to see the perfect and acceptable will of God in your life.

Not an Aging Theory

People who experienced deep pain in the world, all of a sudden they have a different perspective about the word of God. The word of God is no longer an aging theory. The word of God becomes life to them. I’ve been with you for many years. I’ve been in this church since 1992 so I’ve been in this church for 23 years. I’ve seen you since some of you were really young, before marriage, while you were in school. For a while. I saw dedication. I saw a deep passion for the word of God, a deep passion for Jesus, but somehow life carried some of us to a totally different place. We don’t have that passion anymore for the word. We used to have it, we used to be so dedicated, but somehow through life experiences, something else started influencing people.

Sanctified With the Word of God

If we do not know the word, we’ll be lost. Jesus taught the disciples the word. That’s why they could survive. Be sanctified with the truth, be sanctified with the word of God. That’s the only thing that can sustain you. Don’t base your life on good experiences that you have in this world. That will not last too long, and you cannot control that either. The end will be disillusionment and disappointment. Let the word of God transform you. You’ll be able to love the world and enjoy the world without being fooled by it. You’ll never get lost when you have the living word. You’ll find true joy. That’s what St. Paul said. He said, rejoice always not only when things are good, rejoice always. He said this in prison without knowing the future of tomorrow. He said, rejoice always. He was sanctified by the truth, so joy becomes a characteristic of his life and that was what Jesus also said today in his prayer. I speak these things in the world so that they may have my joy made complete in themselves. Jesus was leaving, but he wanted disciples to have complete Joy.

The joy the world gives cannot give true joy. The peace the world gives you is temporary joy. The life the world guarantees is a temporary life. The joy, peace, and life that truth guarantees us is for eternity. Don’t invest all your time, energy, resources into things that are here for awhile and disappear. Invest all that into eternal things. That was Jesus’ prayer for the disciples.