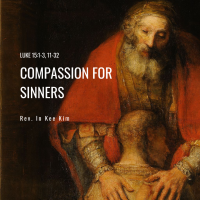 Reflecting on the father’s heart

I was reflecting on the father’s heart. Deep in his heart, the father was calling out to his son to come home.  I thought about the younger son. He was pretty bad. Seeing him I was kind of even angry with his attitude. I mean, he said, “Father give me the share of the property that will belong to me.” I mean not the share that belongs to him right now, but the share that will belong to him when the father passes away, when the father dies. In front of his father, he is telling him “give me this share that I’m supposed to have when you die.” In other words, “I will consider you dead, so why don’t you just give me the money, dad, that I need”. And he took the money and he went away. I don’t know why the father gave him the money. If Joshua came to me and did that I would smack him and say “go to your room!” But the father gave him the money! The father looked pretty foolish.

The son who only thought of himself

He left home as though he would never come back, but when he lost everything, and when he was miserable, and when he was hungry, he came home. He had a thick skin, I thought. I mean, he took all the money and he just came back home because he was hungry. I was describing all this at the KSM service and one woman said, “not fair!” in the middle of the sermon. She always does that in English – “not fair!” – haha. She was angry. Yes it was not fair. His coming back home – was it true repentance? I wonder. I mean, he said it, but words don’t mean much. He said “I have sinned against the father and I have sinned against God and in heaven” or whatever but I don’t believe the words. Was he really really sorry in his heart as he said? Or was it because he knew that there was enough food at home? I mean, this was what he said: “How many of my father’s hired hands have bread enough and to spare but here I am dying of hunger!” “I got to go home.” So he came home, maybe it was because he was hungry. Was his motive really pure? Or were his actions still just for himself? Did he come back just for food?

The foolishness of the father

But the thing is: the father didn’t ask him any questions. He was just happy that his son came back: “for this son of mine was dead and is alive again; he was lost and is found!” He was so excited. He was running around everywhere ordering his servants: “Quickly, bring out a robe, the best one, and put it on him; and put a ring on his finger and sandals on his feet and get the fatted calf and kill it and let us eat it and celebrate!” He was ecstatic! Seeing this kind of behavior of his father, I kind of felt that he looked foolish. He looked foolish. It wasn’t that his son won a gold medal and came back home in glory. He lived a filthy life spending all his money on prostitutes. And the father threw a party just because he came back home? The father looked foolish. That was what the elder son saw. He didn’t say it literally in this way, but he said: “this is stupid! This is stupid.” This is what he said: “But when this son of yours (he’s not even his brother) when this son of yours came back, who has devoured your property with prostitutes, you killed the fatted calf for him!”

In this parable we can see many different messages: God who forgives sinners; God who values each person preciously; God who searches for the lost; God who waits for the sinners to come home; there are many messages in this parable. But somehow this time my eyes went to this father and his foolishness. This father and his foolishness. And then I realized that love is foolish. Love is foolish. The foolishness of the father is what love looks like. Love is not always reasonable. When Mary poured the expensive perfume on Jesus’s feet that perfume was 300 denari. One denarian was one person’s wage a day. 300 denari was almost $20,000 perfume. She just poured it and wasted it on Jesus’s feet. It was foolish, wasn’t it? Yes. Mary’s action was not reasonable. The disciples rebuked Mary for her foolishness. “You know with that money you can save so many hungry people? You just wasted it.” That’s right. Love is foolish. Love doesn’t calculate. Love doesn’t ask what’s in it for me! Love doesn’t always ask what is the right thing to do. The father didn’t ask the son why he did it, whether he learned a lesson, or whether he realized how good your home was. He was simply happy and wanted to celebrate.

The foolishness hidden in the cross

The core of the Gospel

We seek power that dominates

People of our time value intelligence. Why? Because that is the power. Intelligence is money, and money is power. That’s why we value intelligence. People want to be smart. They want to have power, power to control. Power to dominate. And power to conquer. Whenever they are threatened they use this power. But as we exercise this kind of power, we lose the power of love. When we relate to each other with this kind of power, then love disappears.

Last week, I read a lecture by Mary Jo Leddy. She is working with refugees in the west end of Toronto. She has about four houses and they have refugees living in them, and she lives there too.  She teaches at the University of Toronto. I really like the way she interpreted power. She said people think that power is a thing, like money. If power is a thing, then some people have more power and others have less power. But she said thanks to the discovery of science, power is like when two or more molecules are together and vibrate. The energy is created and power is that energy. I explained that to the Women’s Bible study and that was a very interesting way of looking at power.

Power that comes from weakness

So one individual can never have power. Only when we are together and when we vibrate together with inspiration, then that energy is created. Not just inspiration, but even though we debate with each other we disagree with each other, when we relate to each other, then power is created. Then energy is created and that energy is the creative power to save. human life. When we are together and inspire each other, discuss and even debate – creative energy is produced and THAT power will save all of us. Not the power to conquer and dominate; that only kills, that only kills each other. But the energy – that power – that comes from all of us: that saves us, that enlivens us, that empowers us. When we let down our own wisdom and our own raw power and share our brokenness and vulnerability – then we will experience the power that comes from weakness. That power and only that power can forgive sinners, save them and make them new. By THAT power, the community becomes the community of forgiveness and community of love and that kind of community is a spiritual community.

Foolishness and weakness are the sacrifice of the cross. That is the face of the sacrifice. Sacrifice looks foolish but it is the wisest thing. Sacrifice looks weak but it is the strongest thing. The power that comes from the sacrifice is not the power to oppress, dominate and conquer, but to serve, build up, heal and empower others. What kind of power is operating within you? What kind of smartness or wisdom is operating within you? Do not conform to the pattern of this world, but be transformed by God’s foolishness and God’s weakness. Then we will live.