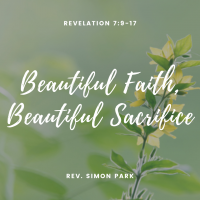 The passage we read is a beautiful vision of the future. Multitudes from all the nations worshiping God together. No more hunger or thirst. Every tear wiped away. What a vision!

But this vision was far from the reality of the community that this letter was addressed to. John, the writer of Revelation, was writing to people going through great difficulties. They were under great pressure. They faced persecution because of their faith. They were weak and powerless politically, socially and economically. The world they lived in, the world as it was, was not a world that was favourable for them.

In these undesirable circumstances, John had this vision of a very different future. It was so different from their present reality. It was a vision of faith. This is where I realized: faith is a vision for a different future. Faith is having a vision and belief that this future can come into being. The Hebrews writer said this:

Now faith is the assurance of things hoped for, the conviction of things not seen. (Hebrews 11:1)

Many people in John’s communities were starting to give up on this dream. They were starting to lose faith. Life as it was seemed too entrenched, too powerful. They started to orient their lives toward life as it was, not on the future that God would bring. They began adjusting and adapting to life as it was, even if it wasn’t really what they wanted. John shared his revelation so that they would continue on in faith.  To not give up.  To hold firm.

Faith In a New Future

On this Mother’s Day, I think of many of our parents, the 1st generation of immigrants to Canada. After experiencing war and poverty, the future they wanted was different from the present they knew. Coming to Canada was an act of faith: faith in a new future. This faith gave them tremendous energy. Starting with nothing, they worked day and night to get established and settled in this new land. Their energy and desire for a different future left them very open to faith in God. They welcomed God to usher in this new future they desired. Their faith led them to sacrifice tremendously for the church. I mean, think about it: they’re working at their store from 7am to 11pm, 7 days a week. But still, they managed to go to church every Sunday. I look back now with amazement how I went to church pretty every Sunday without fail. Not only that, they gave so much and so generously.  They were not rich or wealthy. But they gave so much (time, money, energy) to build the churches we enjoy today. As I think about them I realize this: when you have faith in a new future, it gives you great energy, and you make great sacrifices to bring that future about. They had faith, and from that faith came sacrifice.

John saw a clear picture of this new future. At the end of Revelation, he describes what this looks like:

Then I saw a new heaven and a new earth; for the first heaven and the first earth had passed away, and the sea was no more. And I saw the holy city, the new Jerusalem, coming down out of heaven from God, prepared as a bride adorned for her husband. (Revelation 21:1-2)

He was imploring his communities to hold fast in faith for this future that God would bring. It was a cry for them to keep the faith.

The Faith of The Next Generation

A common question in our churches today is: where is the faith of the next generation? We see young people leave our churches and leave the faith. This has been the concern of many 1st generations. If you probe deeply enough, I think the question that comes is: why do I need faith? That is really the reason so many have left our churches and the faith. I mean, the 1st generation needed faith.  They yearned for this new future, but knew that on their own they were weak and powerless. They had experienced their powerlessness as a nation in the face of the great global powers. They welcomed God’s help. But times have changed, and we don’t have the same yearnings that they had. Their wishes came true, and we live quite abundantly now.

Where Faith Comes From

Jesus came to bring a different future. His life on earth was like today’s passage: people came together to worship God, he fed people who were hungry and thirsty, and he wiped away tears by making them whole. This vision did not end with Jesus’ death.

The revelation of Jesus Christ, which God gave him to show his servants what must soon take place; he made it known by sending his angel to his servant John. (Revelation 1:1)

When you read the whole book, the revelation of Jesus is that things will get worse, but ultimately they will get better. God will be victorious in the end. That beautiful vision of the new heaven and new earth will be the final victory of God.

I struggled long and hard with this, because in today’s age, people are just too skeptical and jaded to believe that God will bring about such a new future. We’ve seen too much. We’ve witnessed too much. And because we don’t believe in a future that God will bring, our whole lives are focused on the present world as it is. I asked myself: where will faith come from?

And so it got me thinking: if people are too disillusioned to start with faith, then maybe we need to begin with sacrifice. If people learn to sacrifice, they will learn faith.

Sacrifice is giving of yourself for the well-being of others. It is putting the well-being of others ahead of yourself. The act of sacrifice is itself an act of faith. You have no idea of whether it will make any difference.  In many cases, it probably will not make any difference. There is often no fruit from it. But you do it simply because it is the loving and right thing to do. True sacrifice is pure and fuelled by nothing other than love.

At the same time, there is nothing like the potential power of sacrifice. Loving sacrifice has the power to create faith. Sacrifice changes and moves hearts. Sacrifice is the seed for a new vision. When Russia first invaded Ukraine, the world was electrified by Zelensky’s decision to stay in Ukraine.  By now, his famous words to the Americans who offered to help him escape are etched in our minds: “I need ammunition, not a ride.” The sacrifice of his own safety stirred people’s hearts and created faith in Ukrainians that they could resist and fight for their freedom. It jolted world leaders to unify and rally around Ukraine.

We need to teach our children and young people, we need to teach ourselves, how to sacrifice. This is challenging, because we live in a world and time that is so opposite of sacrifice. Our whole society and economy are built on convenience. Everything we need is at our fingertips. Our wealth and affluence have made us slaves to comfort. Everything I do is my choice. Comfort and convenience are great. They make life easier. But when our lives revolve around our comfort and convenience, it destroys our ability to sacrifice. Convenience kills sacrifice. Convenience kills faith.

I believe that the fight of faith for our generation is to reclaim our ability to sacrifice. A fight to free ourselves from the bondage that comfort and convenience has over us. The very definition of sacrifice is doing what’s uncomfortable and inconvenient for the sake of others. We need to build up our muscles to sacrifice for others.

The ability to sacrifice is a practice and spiritual discipline. We need to practice it. Sacrificing for others is a lifestyle and habit that is cultivated. It is difficult, because we are very self-centered. But true spirituality takes us beyond ourselves, and beyond our own comfort and convenience. It is difficult but so worth it. You will start to see beautiful things come out of it.

Your life will reap bountiful rewards.

The Core of Our Faith

Sacrificial love is at the very core of our faith. God sent his only Son into the world to die for it. Jesus’ faith in God’s vision led him to sacrifice himself for it. What was a tragic death for Jesus on the cross became for us a beautiful sacrifice that changes us. St. Paul expresses his experience clearly:

And the life I now live in the flesh I live by faith in the Son of God, who loved me and gave himself for me. (Galatians 2:20)

Jesus’ sacrifice on the cross changed people and gave them faith in a new future. Jesus’ sacrifice changes our future by freeing us from guilt and shame. It frees us to live lives rooted in love rather than fear. That is the power of loving sacrifice. When we are able to sacrifice for one another, it creates faith in others. It cracks open the vision for a new kind of life. A life not built on competition or seeking self-interest. But a more abundant life of mutual giving and building up. A vision for the world that is supposed to be.

Everyone is seeking their calling in life. Here’s the real secret to finding it: learn how to sacrifice yourself for others, and you will find your calling.  Instead of looking for what you can gain or extract, discern where to commit yourself, and sacrifice for that person, group or cause. It will change you and open your eyes to new possibilities for life.

John saw a vision of those who had come out of the great ordeal. The 2nd generation went through its share of ordeals. We often had to navigate these ordeals on our own. Our parents could not really help us. They didn’t have any knowledge or connections. Many didn’t really have great conversations with them – they were so busy working, and there were language barriers. They didn’t take us out to ball games or extracurricular activities. We didn’t understand where they were coming from. But what we felt was their sacrificial love. It was a love expressed not through their words but through their sacrifices. Their sacrifice became the fuel, motivation and power for the 2nd generation. That sacrificial love was more powerful than any built in advantage they could have offered.

We celebrate Mother’s Day because our mothers embody that sacrificial love. We have learned what sacrificial love is from our parents. Their sacrifice was fuelled by faith in a different future for us. We are recipients of their faith.

It is our calling now to have a new vision for our future and that of our children. Let us help them find faith for a different future. Let us help them dream. Let us help them imagine. Let us teach them what sacrifice is. Faith is the greatest gift we can give to the next generation. More than wealth, more than social capital. But faith in the future that God has in store.