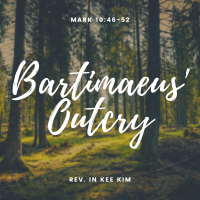 A Doorway to Faith

That is a doorway to faith. No one can come to faith through intellectual reasoning. Faith is not something you choose or conclude as a result of your intellectual exploration.

Unless we have a desperate need, faith is hard to come by. So, when everything is going all right, faith is pretty hard to get. Even if we have faith, it is a kind of faith that remains on the surface level. It is something that you merely choose to believe.

This blind beggar, Bartimaeus was desperate. As soon as he heard the name, Jesus, he began to cry out.

No one could stop him. People tried to stop him because he was so loud and it was unpleasant to hear him. The outcry from desperation is not pleasant to hear. It is raw. Not only is it loud, but it is also mixed with a lot of raw emotions. So, it can be unpleasant. So, people around the beggar didn’t want to hear it.

They tried to stop him also because they thought he was not worthy enough to get Jesus’ attention like that. By then Jesus was already a celebrity. People thought that he had no time to waste to pay attention to people like Bartimaeus, a beggar. He was going into Jerusalem to do something greater than hearing this obnoxious outcry of a poor blind beggar.

But no one can stop the outcry that comes from one’s desperation. Bartimaeus shouted louder.

Many sternly ordered him to be quiet, but he cried out even more loudly, ‘Son of David, have mercy on me!’ (Mark 10: 48)

The Scripture says that Jesus stood still. Stood still! It gives me an image of Jesus standing there and observing all that was going on. I can also see Jesus’ compassion.

Jesus saw this man not just as another poor person in the crowd. He saw that there was something special about this man. To him, Jesus was the only hope. I don’t think he was a born blind because he said this.

Sometimes life does not give us any option to choose. We just have to accept it and live through it. That’s hard. There are people who are struggling with their poor health condition. They just have to live through it. At the last session meeting, we talked about how young people have lost the appetite of life. They lost the zeal and passion, even the purpose of living. They have everything and yet they don’t know why they feel that way. Do you think they want to do that? I don’t think so. They feel helpless. But it’s not just young people but many people feel that they are stuck and life gives them no option to choose.

That was what Bartimaeus felt at that time. It wasn’t that he enjoyed begging. As a blind man during that time, he had no choice but to beg to survive. To him, the only hope was Jesus, the Son of David. Out of desperation comes hope and our hope turns into faith.

My friends, when you feel desperate, don’t give up. When you give up, the only thing that is left is helplessness. Helplessness doesn’t do anything. It destroys your desire to want something better in life. It kills your spirit. That is when you lose life.

He heard about this Jesus before. He heard the rumour that Jesus cured the sick, chased out the demons, and even healed the blind.

As a Jewish man, he also had this hope for the Messiah. This was Messianic hope Jewish people had.

Then the eyes of the blind shall be opened,

and the ears of the deaf unstopped;

and the tongue of the speechless sing for joy.

For waters shall break forth in the wilderness,

He knew about Isaiah’s messianic hope. And he felt that this Jesus might be the one. He wanted to see this man Jesus. But as a blind beggar, there was no way he could see Jesus. It was impossible for him to visit Jesus and see him. That was when he heard that this man Jesus of Nazareth was walking by. He was overjoyed.

Who taught him that? No one. This is the evidence that he heard about Jesus before and he connected him with his messianic hope.

Jesus stood still and saw all that. So, he called him. The disciples called the blind man and said to him,

It was almost like a message. Take heart, get up, Jesus is calling you. Just before the Isiah passage that I quoted about the blind, Isaiah says,

and make firm the feeble knees.

Say to those who are of a fearful heart,

‘Be strong, do not fear!

Here is your God…

Bartimaeus threw off his cloak. That was the only thing he had. That was his blanket to sleep on. That was clothes for him to wear to keep him warm. He used it as his pillow. He used it as a mat to sit on when he begged. But he threw that off. It was almost symbolic. It is like the Samaritan woman throwing away the water jar. He felt that he didn’t need it anymore. He wasn’t going to be a beggar anymore.

When he came, Jesus asked a strange question.

Jesus often did that. To the man who was sick for 38 years, Jesus asked, “Do you want to be made well?” Such an obvious question, Jesus asked sometimes. He asked Bartimaeus a similar question.

His answer was simple.

He asked for what he needed not what he wanted. He asked for his basic need to live a decent life. Somebody said, give the bread to those who are hungry because they are asking for what is theirs.

In the same chapter, right before this story, there is a story of James and John coming to Jesus. Jesus asked them the same question.

Their answer was different.

Today’s story is the last miracle story before Jesus entered into Jerusalem. Jesus did not perform miracles anymore after this one. From chapter 8 to 10, Jesus was talking about the discipleship and three times, he said how he would die. But nobody understood what he was talking about. People with two healthy eyes could not really see Jesus but this blind man saw Jesus clearly.

Among all those who were healed, he was the only one whose name was given. Why do you think so? Because by the time Mark wrote his gospel, Bartimaeus was a well-known disciple. So, this story is not just about the miracle story but the story of the discipleship.

Bartimaeus who was on the roadside was now with Jesus on the way.

They came to Jericho. As he and his disciples and a large crowd were leaving Jericho, Bartimaeus son of Timaeus, a blind beggar, was sitting by the roadside. (Mark 10:46)

Immediately he regained his sight and followed him on the way. (Mark 10:52)

Out of desperation came hope. From hope came faith. Through his faith, he was healed and became Jesus’ disciple.

Jesus told him to go but he followed Jesus.