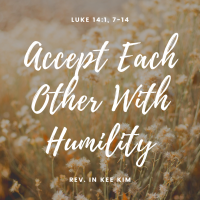 It is not a good feeling to be rejected. Everybody wants to be wanted and welcomed. Even among friends, we get hurt when we feel excluded.

One of the greatest headaches in planning the wedding is to decide who to invite and not only that – where to seat them. I think It was the same 2,000 years ago. That’s why Jesus used a parable of a wedding banquet. Not only people want to be in but they want to be at the highest place.

People measure their worth by how well accepted they are. So people try so hard to be accepted. To feel important. To feel worthy.

If that is the measure of your worth, Jesus did not do very well. He was rejected, hated, abandoned, and killed. But Jesus never measured his worth by how well he was accepted. He taught us to do the same.

But when you give a banquet, invite the poor, the crippled, the lame, and the blind. (Luke 14:13)

Invite those who live their entire life, always rejected.

That was what Jesus did. He was a friend of tax collectors, sinners, and the sick. He was a friend of those who were socially alienated. His disciples were mostly fishermen. Not important people. Not highly regarded people in their society. They didn’t have any social status. Jesus was their friend. And Jesus did his ministry with those who were not that significant in their society. They were nothing in the eyes of powerful people.

Those who are well have no need of a physician, but those who are sick; I have come to call not the righteous but sinners to repentance. (Luke 5:31, 32)

Last Thursday, I visited a person at St. Joseph Health Centre. His wife called me to say a prayer for her husband since he is in a critical condition. Probably my last prayer for him. When I visited him, he was barely conscious. He had his eyes closed but not much response. I called his name and there was no response.

So I read Psalm 23 and told him that God accepts you not because you are good but because of his grace. Do you believe that? Do you accept God’s grace? He was quiet and no response. And all of a sudden, he said, I believe. He passed away yesterday.

The way God accepts people teaches us how we should live.

When we have the attitude of being considerate of those who are rejected and alienated, we will be able to build this community. But when everyone wants to be at the centre of attention, the community will not be able to stand.

That’s what humility is. Be humble.

Humility is a Christian virtue.

Let Us Be Humble

When pride comes, then comes disgrace; but wisdom is with the humble. (Proverbs 11:2)

God opposes the proud, but gives grace to the humble. (James 4:6)

Do nothing from selfish ambition or conceit, but in humility regard others as better than yourselves. (Philippians 2:3)

The reward for humility and fear of the Lord is riches and honour and life. (Proverbs 22:4)

Let us be humble. The best way to be humble is to raise up others and compliment their accomplishments. When you are happy for others, you will learn to be humble. When you get to know God more deeply, you will become more humble.

Let us accept each other with humility.