Hi St. Tim’s! We have been so fortunate to have gone on a mission trip to Montreal this summer. Here is a breakdown of everything that we did!

Monday morning, we left for Montreal bright and early! When we arrived there, we met Jenny who was one of our main coordinators for the trip. She’s really nice and we got to know her really well during our two weeks there. 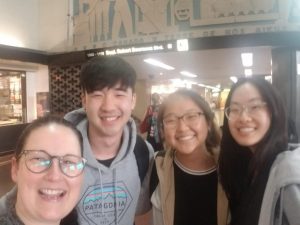 We ate dinner with our hosts Monique and Ernest who are super funny and kind. Afterwards, we went to go see the Canada Day fireworks at the Vieux-Port with Jenny and her friend Mike. Happy Canada Day! 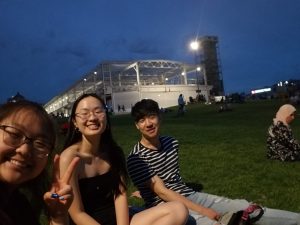 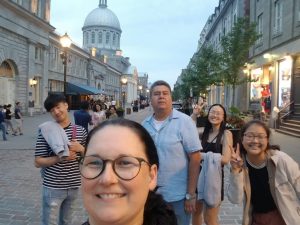 Tuesday Morning we were able to go on a three hour walking tour of the life or Rosalie Cadron-Jetté, a woman who decided to answer God’s call and help those around her, particularly unwed and struggling mothers. She founded a hospital, community centres, and helped build churches, some of which are still around today.

In the evening, we went the Jazz Festival in Montreal with Jenny and Mike but it was really dead and we were tired from the walking tour, so we decided to watch Spiderman: Far from Home which was really good.

Wednesday was the first day that we went to Le Chaînon, an organization that helps struggling women by providing shelter, food, and access to clothing or supplies. We worked in merchandizing with Étienne, who was really animated and enthusiastic. 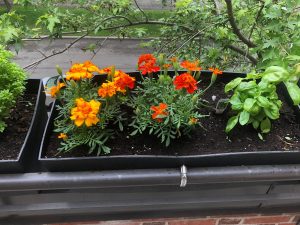 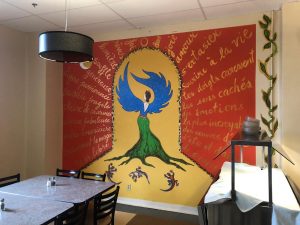 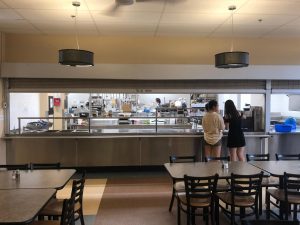 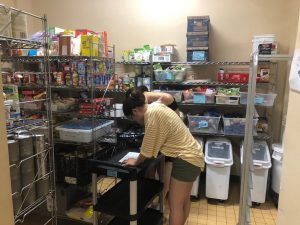 After we went to Le Chaînon, we went to go see the Basilica Notre-Dame’s Organ. It was magnificent. And really loud.

In the evening, we went to go see a fireworks competition with Jenny and Mike. That day South Korea was competing and they did so well. Go Korea!

That morning, we met Rev. Joe Reed over breakfast. We went to Tyndale community centre to help out with the kids camp there in the morning. 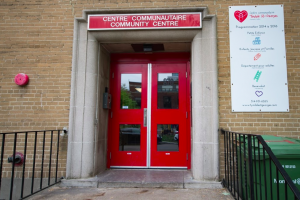 In the afternoon, we went white water rafting, which was really fun. We though we were going to die, but we didn’t so it all worked out.

We returned to Le Chaînon, where we worked with Étienne. We are so thankful to have worked there and to have met such a fun and memorable person. 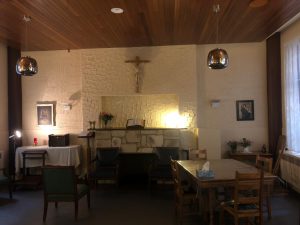 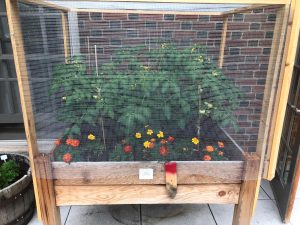 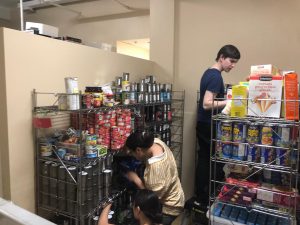 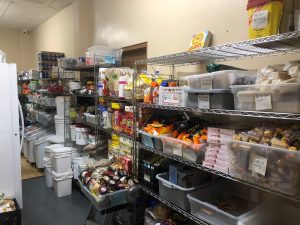 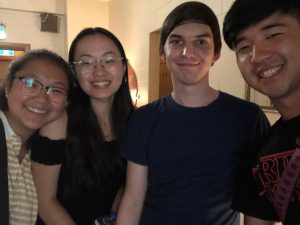 After working, we got Montreal Bagels and returned home with some other groceries and ate the best bagels with smoked salmon, cream cheese, and quiches. A good finish the week!

Friday night, we went to Jenny’s church’s prayer night. It was a really interesting thing for us to experience since none of us had really participated in a Catholic prayer before. After the prayer part, we listened to a message that was given at a recent retreat of theirs which was about finding God in your life and letting Him into your heart. 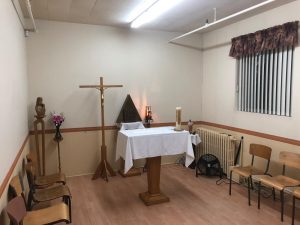 Afterwards, we gathered in fellowship over ice cream then went home to sleep.

Even though it was super hot, we went to the Oratory of St. Joseph. After hiking up the hill because we didn’t see that there was a shuttle bus, we arrived at the top and got to appreciate the beautiful building. There was an amazing view, and the breeze cooled us down a little. The main chapel especially was amazing. 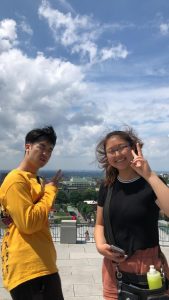 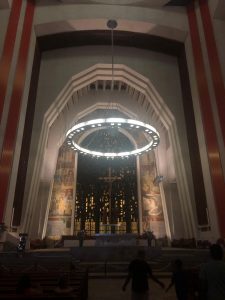 In the evening, we went to dinner and ice cream with Jonas and Angel-Charly, two members of Jenny’s church. We really bonded with them, and had a good time of fellowship. 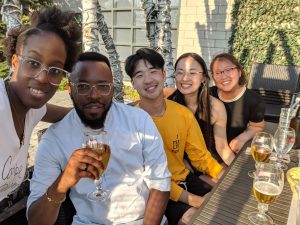 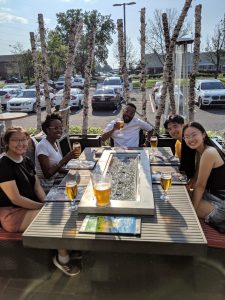 On Sunday, we went to Snowden Presbyterian Church, which is a Korean Church in Montreal. The message was about answering God’s call wholeheartedly, as Peter did. The highlight was the homemade kimchijjigae, which fueled our souls. 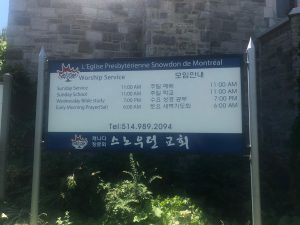 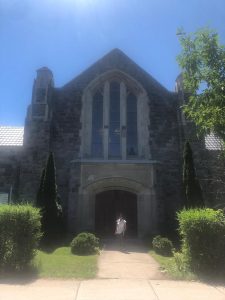 Jenny’s church was doing a tour of their chapel, so we got to see how it was built and its relationship with the community. We also were lucky to get a tour of the organ at the church, which is the second largest in Montreal, second only to that of the Basilica of Notre Dame and only by one pipe. 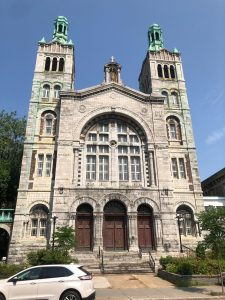 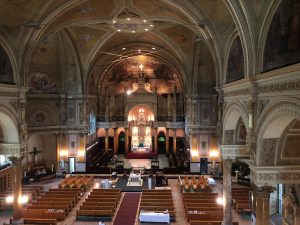 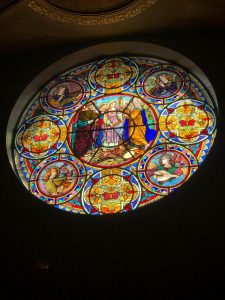 In the afternoon, we met with Paul Clarke, the director of Action Refugié. Action Refugié is an organization that supports refugees and asylum seekers in Montreal.

Tuesday we went to La Petite Maison de la Miséricorde. It’s a place that helps single parents, but focuses mostly on mothers. They offer daycare, family activities, and a garage sale from donations. We helped out with cleaning, organizing clothes for the garage sale and taking care of the kids. 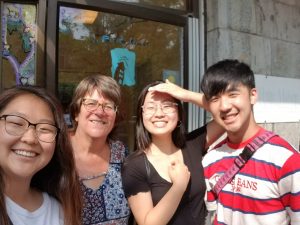 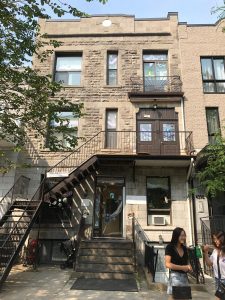 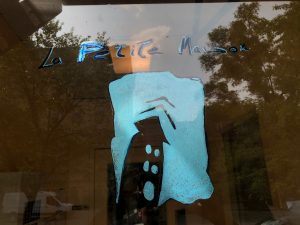 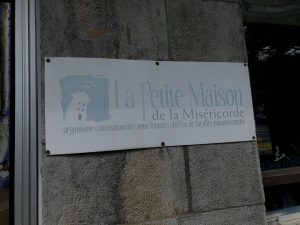 In the morning, we met with Fergus who talked to us about the Irish community in Montreal. He showed us important landmarks of the Irish Church in Montreal as well as a monument that was built for the immigrants who died of a ship fever. 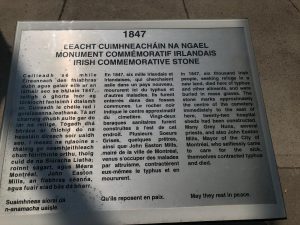 In the afternoon, we visited Le Maison St-Gabriel. We learned about the history of those who were brought to Canada and were educated by Marguerite Bourgeois and nuns who lived in the house.

In the evening, we went to Rev. Joe Reed’s church to talk about French speakers outside of Québec. It was a very interesting conversation with input from a people with very different backgrounds. We learned a lot about the conflict of French speakers and English speakers as well as how French speaking people outside of Québec and those who weren’t raised in Québec struggled with a language barrier and stigma. French limits people to Québec but those who were not raised in Québec but speak French also face barriers in education, social life, and career.

In the morning, we met with two representatives, Fred and Emily, of the organization GRIS who focus on raising awareness for the LGBTQIA+ community in schools. There we had a good conversation about their own personal stories as well as how that community is affected by certain things we may not even be aware of. We were also joined by Jenny and Rev. Joe Reed who gave their input on how the LGBTQIA+ community can be incorporated into the discussion about religion.

Later that day, we were really lucky to have had the chance to hear a world-class organist play for us!

Afterwards, we went to one of Jenny’s old churches, Paroisse St. Clément, to help clean out the office space there. We eventually left to Eaton Centre in Montreal to purchase gifts for everyone that took care of us there.

With tonight being the last night in Montreal, we decided to attend a Just for Laughs show called The Ethnic Show. It was really funny and we would recommend that you attend a show whenever you have the chance! 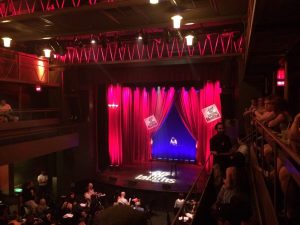 This morning, we had brunch with everyone that showed cared for us in Montreal. We were able to have our metaphorical “Last Supper.” In a way, it was a bittersweet ending to our mission trip. It was very nice to able to enjoy our last official meal in Montreal finally eating a crepe! It was sad however, that we had to say bye to the people we had grown so attached to over the two weeks we were there. 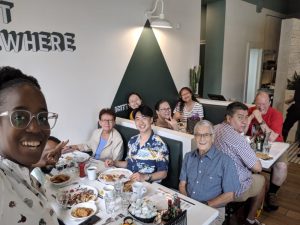