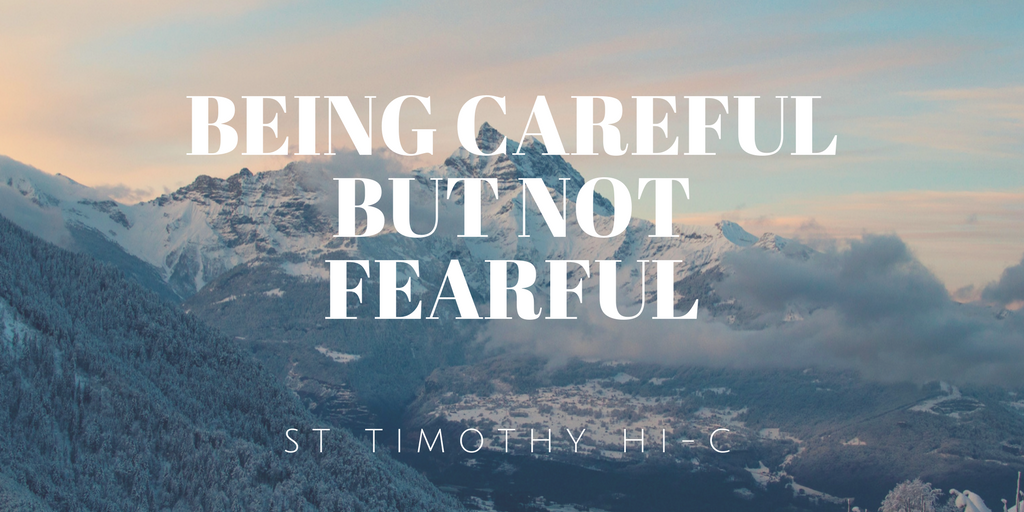 I want to talk about something real and concrete today.

Toronto is a big city and a big region.  There are literally millions of people living here. Overall it’s a pretty safe city, but things still happen.

Our personal safety can become at risk: muggings happen, women and young girls are stalked or assaulted, and all sorts of other things do happen.

The big lesson is that life is uncontrollable. While you were children, your parents did everything they could to keep you safe from any potential dangers that may lurk out there.  You were told not to talk to strangers, and you were not to travel by yourselves.

But as you’re getting older, you are gaining more independence and have to face the world for what it is.

There are things that happen that may shake our sense of personal safety.

While I was growing up, my parents owned a store. So did the parents of many other second generation Koreans like myself. Being a store owner was a very vulnerable position. My dad got robbed more than once. One of our stores back in the day was in the hood.  There were lots of teenagers and lots of shoplifting. One time, a small group of teens openly stole chocolate bars in front of my aunt. She later pointed out the group to my dad when he got to the store. They were milling about in the parking lot. My dad pointed to the ringleader and told him to come inside. He was a pretty big guy and he wasn’t afraid of some Chinese man, so he smugly walked into the store. My dad led him to the back to a storage room. Little did this guy know that my dad had been a black belt in judo. As soon as the teenager got inside the storage room – “whap”!  My dad did a huge judo flip on this guy and smacked him to the ground. The guy then begged for mercy. Let’s just say that my dad’s rep spread in the neighbourhood, and shoplifting wasn’t much of a problem after that.

But that was back in the day. I would never advise taking such a course of action today.

Serious things happen. A common thing for teens is to get mugged and robbed. If no one gets hurt, that’s the most fortunate thing, but what’s not seen is the emotional and psychological trauma that happens. When this happens, one’s sense of personal safety is deeply affected and violated. It’s a shock to the psyche and system.

Teenage girls can fall prey to lewd comments from older men. This too can shake a girl’s sense of safety.

The unfortunate result of these things is that they make us feel fearful, guarded, and mistrustful. They can cause us to become withdrawn and hold back in order to feel more safe.

Fear is the prevailing emotion, and we then try to control this fear or make it go away by not thinking about it. But little do we realize that we are more on edge and easily provoked.

Why do people do these things? What would make someone inflict this kind of harm and damage on others, even if it’s not physical harm?

First, almost all of them had a poor and single working mother. This means they were alone quite a lot. They had to navigate life largely on their own. As a guy, they faced a harsh world of having to prove themselves. They were often told – directly or subtly – that they were worth less than those who were better off and had good families. They got the message that they weren’t as loved as others. And very often they suffered some sort of abuse at the hands of others – whether physically getting robbed or beat by others, or psychologically by being told they weren’t worth much.

They were damaged by the environment and from what society told them. With this damage came a lack of insight and empathy – the ability to feel others’ pain. When you’re in pain and not healed from it, you can’t feel the pain of others. When you are in pain, your focus remains on your self. And this is why it’s hard to “deny ourselves” when we are suffering with inner pain.

They were damaged and also felt powerless in many ways. But no one likes to feel powerless. And so one way to feel this power is to exert it over others. To overcome the sense of powerlessness and lesser worth due to their material poverty, robbing or mugging someone is a way to feel more power.

And with this, the damage and pain is passed onto others. It’s a vicious cycle of receiving pain and then inflicting it on others.

So you see, the root cause of these types of actions is often unresolved pain, hurt, anger, lack of self-worth and a sense of powerlessness.

If that’s the case, then we as human beings have a moral responsibility to deal with our hurts, anger, lack of self-worth and feelings of powerlessness. Because if we don’t deal with them, we’re going to pass this pain onto others in some form or another.

In order to “deny ourselves” as we discussed last week, we need to first be aware of ourselves and what’s inside, and be healed.

We need to acknowledge the unresolved pain, traumas, hurts and anger we have inside of us. That’s not a pleasant thing and we tend to run away from what’s inside. But doing that will only lead to more harm in the long run.

Only when we face it directly can we be healed from these things. When we are healed, then we can have empathy – feel the pain of others and thus be responsible and not cause harm onto others.

The gift from our faith is that we have God as our strength. God heals us when we come to Him. If we come honestly before God with all of our fears, our hurts and anger, in God’s own way and time He heals us.

Not only that, but God takes away our fear: “Even though I walk through the darkest valley, I fear no evil; for you are with me”.

This doesn’t mean that we are naive – we need to be smart and be aware of what’s out there, but we no longer let that fear control us.

But those are things we leave in faith to God. We can’t be strong and courageous on our own – we are too frail for that.  Rather, it is God who gives us strength, courage and healing. Our only job is to be honest – about our fears, our traumas, our hurts, and to just let them be. Don’t try to hide them, push them away, or try to use your willpower to get rid of them. That won’t work.

But just be honest about it and cry out to God about them. Lament. Complain. Cry. Only pure honesty can open our hearts for God to heal it.

And with open hearts, God will be our strength and give us strength to walk without fear.